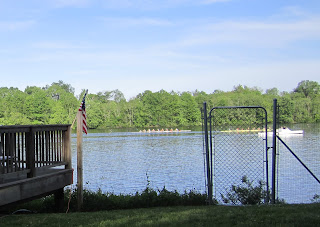 There, on that tree across the lake, past the national women's rowing team training for the Olympics. Can't you see them? 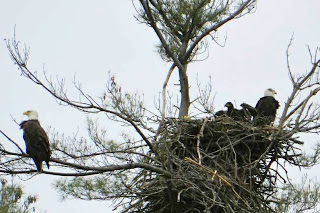 Okay, maybe a different camera will work better. Thanks to Pam Machold for sending me these. Here's Mommy and Daddy Eagle, and Baby Eagle, feeling like they're on top of the world, or at least on top of the local foodchain. 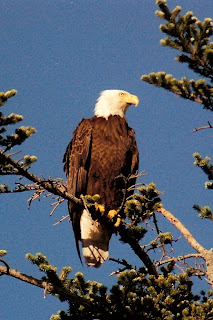 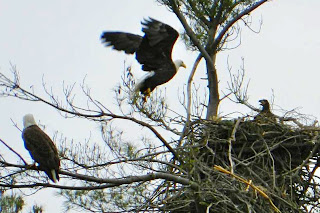 and a shot of parents in action. 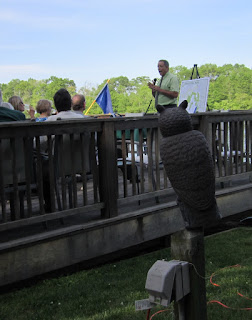 I happened to be at this remarkable home, perched on the edge of Carnegie Lake, for a New Jersey Conservation Foundation gathering. When Emile DeVito, NJCF Manager of Science and Stewardship, speaks, even the owls listen up.

Emile remembered visiting the one remaining bald eagle nest in New Jersey back in 1973. Since then, through considerable human intervention to nurture fragile eggs, and the banning of harmful pesticides, the bald eagle population has grown to 100 nesting pairs. Emile explained that, early on, biologists would take the thin-shelled eggs from the nests, replace them with artificial eggs to fool the eagles, then hatched the eggs in the laboratory and returned the hatchlings to the nests for the eagles to raise. As DDT faded from the foodchain, the eggs must have grown stronger, because the eagles have now repopulated NJ to the point that the best nesting sites are taken.

Though the recovery of the bald eagle is a great success story, it is not possible to intervene in a similar way to save the thousands of species of plant, bird and insect species that are threatened. He said that a third of plant species in New Jersey are now threatened, due to habitat degradation. Only the preservation and stewardship of habitat can preserve the many species pushed to the edge.