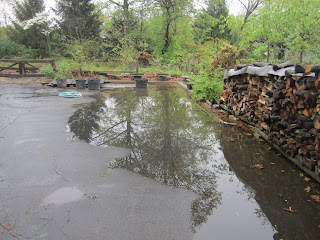 Every homeowner has to deal with drainage, which could be considered dull if it didn't stir considerable passions in people, particularly those on the receiving end of someone else's runoff.

The traditional approach has been to either ignore runoff until it causes trouble, or to get rid of it as quickly as possible, typically through buried pipes.

My approach is to make runoff the central driver in landscaping decisions, to treat it as an asset while keeping it away from the house, and to take as much advantage of it as possible before it leaves the property.

One dilemma in our yard has been that much of the rainwater from the roof was directed into the driveway via underground pipes. From there, it was expected to flow away through a small drainage pipe that has never worked very well. The drain has become so slow, and unrotorootable, that the driveway now behaves like a retention basin. Not a bad use for a driveway, in some respects, but not ideal.

Part of the solution has been to reroute runoff into the front and back yards, away from the driveway. 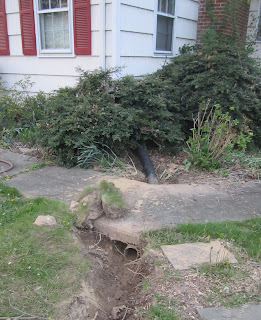 The most recent rerouting takes runoff from the front portion of the roof under a walkway and out towards the street. Given how little fun it is to dig under a walkway, this project was mulled over for many months. 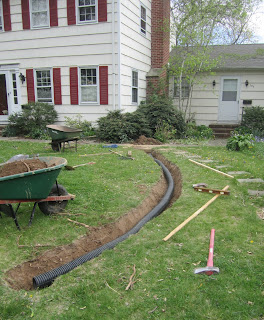 Sure enough, digging a ditch has not gotten any easier since the last time. It's always good to have a spot picked out for the extra dirt, which in this case fortified the Maginot Berm that diverts runoff from my uphill neighbor's driveway away from our house and into another raingarden in the front yard.

One less than optimal aspect, not considered until after the fact, was that quite a few tree roots got cut in the process. A lawn's monocrop appearance gives no clue to the web of tree roots just below the surface. Hopefully the trees will end up benefitting from the extra water coming their way. 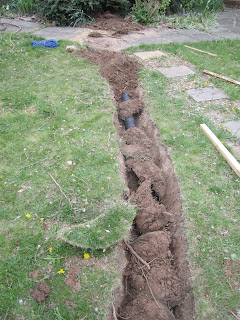 Chunks of sod got flipped upside down and put back in the ditch, then buried with loose dirt. Tubing had been previously obtained from the neighborhood curbside kmart before it could head to the landfill. 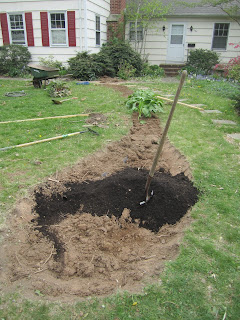 Some leaf compost from the Lawrenceville Ecological Center probably wasn't necessary, but a little doesn't hurt. Many native plants do fine in poor soil, and since this raingarden overflows across the sidewalk and into the street, it's best to minimize nutrients. 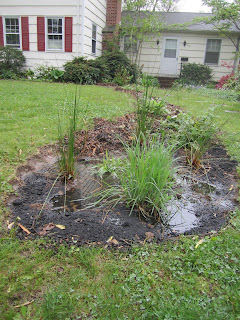 Here it is in action, holding water that will seep into the ground over the next day. Plants include soft rush, turtlehead, monkey flower, a Carex sedge, and a few other plants thinned from backyard gardens.
Posted by Stephen Hiltner at Monday, May 14, 2012