Truth be told, it's not really National Weed Pulling Week. Sorry to get your hopes up. But with the recent rains, this is a primo time to be out there doing what needs to be done in the eternal struggle to steer nature's growth energy in a desired direction.

There's no better way to start learning to discriminate one plant from another than to plant seeds in a vegetable garden and then try to figure out what's what amongst all the eager prospects that soon appear. Hopefully enough of the intended plants come up to form a line. That's the best clue, and all one really needs to start weeding, but below is some more information for navigating the world of weeds. 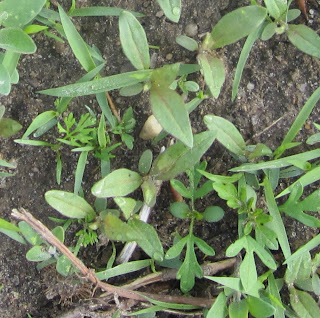 Most everyone's seen the leaves on a mature carrot, but what do they look like when the plant is 1 inch tall? In this photo, the carrots have highly dissected leaves, like the one over towards the left. Smartweed--so called because it tends to grow in schoolyards, like the raised bed where this photo was taken--has the larger oval leaves. Grass has long, pointed leaves. And down at the lower left, partly obscured by a long dead blade of grass, is lambs quarters, which can grow to six feet if adequately neglected. 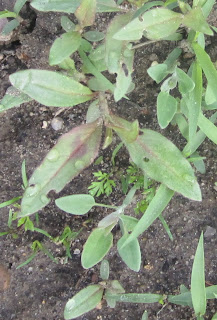 Here, the biggest plant (maybe 2 inches high), is one of the many kinds of smartweed. Carrot is hidden just below it, with lambs quarters just below that. A grass blade is at the lower right. Everything can be pulled except the carrots, though the lambs quarters is edible and its young leaves taste about as good as anything we grow intentionally. If you wait too long before weeding, all the root systems intertwine and the intended plants come out with the weeds. Having waited too long, you can press down on the soil on either side of the intended plant with your fingers while pulling the nearby weed out with your other hand. 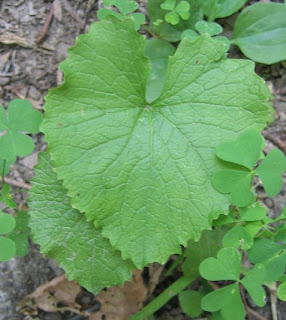 In this photo, which I found from a past post by typing "garlic" into the search box at the top of this website, the big leaf is garlic mustard, surrounded by wood sorrrel leaves with three leaflets each. Garlic mustard is edible, particularly when the leaves are young, and wood sorrel has the tangy taste of oxalic acid. At the upper right is what looks like a small plantain leaf. All of these can be competing with your intended seedlings.

When pulling weeds, be sure to grasp them at the base and pull slowly, the better to get as many roots as possible. 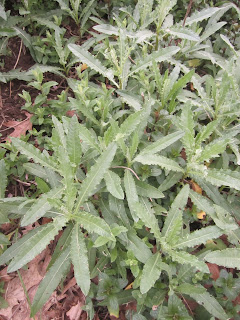 Canada thistle spreads underground. It pulls up easily when the ground is soft, but will keep sending up new shoots. The strategy here is to be persistent (we're speaking hypothetically), wear gloves, and pull the shoots before they have time to feed energy down to the (seemingly vast) root system. Laying cardboard down, then covering with mulch, is a good way to prevent any sprouts from coming up, but usually the thistle is mixed in with desired plants that one doesn't want to bury beneath mulch. 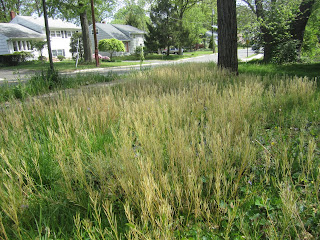 This is what Hairy Bittercress, the seed-flinging weed mentioned in a previous post, looks like if it goes unweeded. Too late now. It's seeds are flung and ready for next spring. 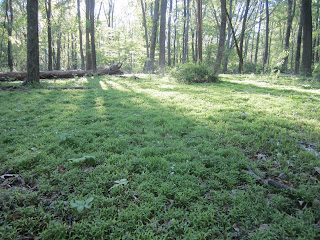 Stiltgrass (mentioned in a previous post or two) is an annual that has invaded many yards. It can be made scarce in flower beds by pulling it before it goes to seed in late August.

It's a bit of a problem out in the woods, though. Here's a stiltgrass meadow with millions or billions of individual plants. Barring a National Weed Pulling Century, it's wise to pick one's spots.
Posted by Steve Hiltner at Saturday, May 05, 2012