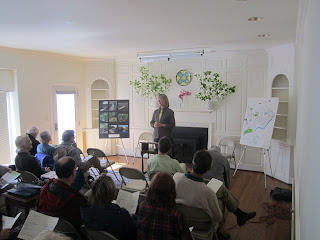 The Friends of Princeton Open Space (FOPOS) had its annual meeting this past Sunday. Wendy Mager, now in her 20th year as the highly effective president of the organization, reviewed the past year's events, which included preservation of large wooded tracts along the Princeton Ridge, with more in the works. AeLin Compton, the new natural resource manager for FOPOS, was introduced to the membership. 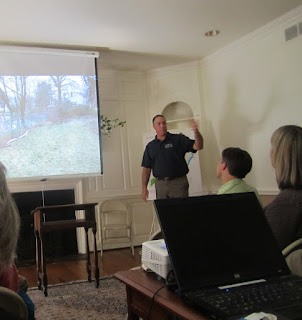 The guest speaker was Emil DeVito of the NJ Conservation Foundation, who with voice resounding through Mountain Lakes House made some powerful points about the steep decline in habitat quality in NJ in recent decades. Everything from losses in plant diversity, lack of tree regeneration, soil erosion, the dominance of exotic stiltgrass, and the loss of organic matter in the soil is linked directly or indirectly to the dramatic rise in deer numbers.

He speculates that this imbalance, and the severe browsing pressure on native vegetation that it creates, is without precedent in history. If deer numbers had been so high in the past, native wildflowers like the swamp pink would never have evolved growth strategies that now make them extremely vulnerable to decimation by intense browsing.

Earthworms, too, though beneficial in a vegetable garden, turn out to be destructive in natural areas. He described the imported European earthworms as being slow-moving. Asian species have a higher metabolism.

How would deer and invading earthworms impact forest soil health and even contribute to climate change? If there are too many deer, they eat all the native shrubs that were deepening the shade on the forest floor. Sunlight warms the less-shaded soil as much as 10 degrees above normal, stimulating increased worm activity. The worms consume last year's leaf litter faster, reducing soil organic matter that would otherwise have absorbed rainfall, sequestered carbon and provided habitat for soil organisms.

Part of Emile's power as a speaker comes from his talent for intermingling comedy with tragedy. His stories about neighbors' reactions to his anti-lawn landscaping had the audience convulsing in laughter. 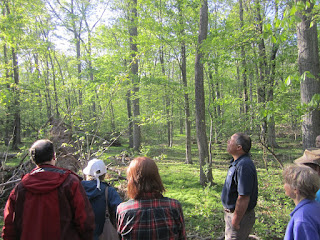 Refreshments followed the talk, and then Emile led a walk in Mountain Lakes North. Of particular interest was observing what happens when a mature tree falls, creating an opening in the canopy. In a healthy forest, there would be young trees ready to grow into the gap. If deer have eaten all the young trees, however, the gap will remain open, feeding the growth of exotic stiltgrass on the forest floor.

Princeton's open space is better off than many woodlands elsewhere in NJ. Annual deer culling since 2000 by the township has helped reduce browsing pressure enough to allow a resurgence of native shrubs like spicebush. But until deer numbers are reduced to at most 20 per square mile (5-10 is better), the forests will not be able to heal.
Posted by Steve Hiltner at Thursday, May 03, 2012