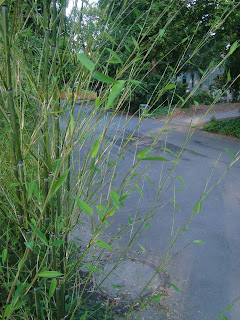 A photo of the offspring of the Mercer Oak at the Princeton Battlefield would be appropriate for Memorial Day, but lacking that, a post on bamboo will have to do. My understanding is that the Revolutionary War was a war of attrition. The Continental army won few battles, but managed to sap the will of the British over the course of eight years.

You may never completely win the battle against bamboo, but conducting a war of attrition can turn an advancing monster into a minor nuisance. The goal is to starve the massive root system of energy, in other words, to lay siege. Cutting down all the stems immediately shuts down any solar energy collection, forcing the root system to use its reserves to sustain normal metabolism.

The roots then commit additional energy reserves to sending up new shoots. These can reach six or more feet before they start sprouting leaves. As these bare stems grow, be patient. Keep those loppers at the ready, then cut the long, still-soft stems down just as those solar collecting leaves begin to appear. Proper timing will cheat the roots of any return on a substantial investment in new infrastructure. As the roots weaken, each new set of sprouts will be smaller than the last.

For battles waged on the property line, an alliance with the neighbor will be critical.
Posted by Steve Hiltner at Monday, May 28, 2012