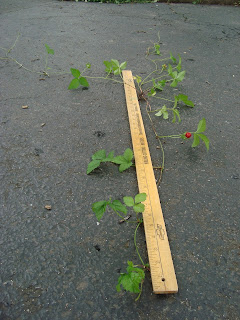 Mock strawberries look like native, edible strawberries, but their flowers are yellow and the berries are inedible. It spreads through flower beds and lawns by sending long runners across the ground, sprouting new plants along the way.

Catching it early can save a lot of time later on. The photo shows how one plant sending out three runners has already formed 18 new plants, and it's still early in the season. 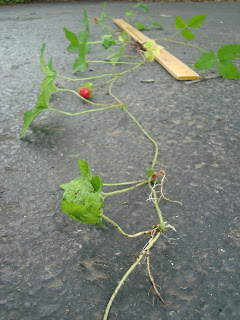 Each new plant can form roots that will make pulling much harder later in the season.

The native wild strawberry can also be aggressive, quickly spreading through the garden without providing much in the way of berries.
Posted by Steve Hiltner at Monday, May 28, 2012