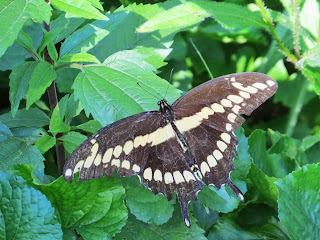 Though it's been an awful year for monarch butterflies (more on that soon), the swallowtails have had a good year. I've seen mostly the yellow swallowtails, but this unusual one showed up in the backyard one day last week, ignoring the ocean of wildflowers in favor of a leaf.

Apparently more typical of the south, the giant swallowtail's caterpillars feed on members of the Rutaceae--the citrus family. Since oranges and lemons don't grow in New Jersey, that leaves lesser known members of the Rutaceae, such as the native wafer ash and prickly ash, to serve as hosts in the giant swallowtail's life cycle. I've never encountered either of these host species growing around Princeton, so the butterfly's presence here is a bit of a mystery.

A discussion group at GardenWeb.com mentions a couple possible causes of its occasional appearance hereabouts. One is that a so-called "big flight year" occurs, in which weather conditions cause butterflies to travel more than usual. Another is quoted from Butterflies of New Jersey by Michael Gochfeld - "The larvae and pupae of this species are sold commercially and the resulting adults are often released, rendering suspect any sighting of this species in New Jersey."

Here's a list of New Jersey butterflies, which includes the giant swallowtail.