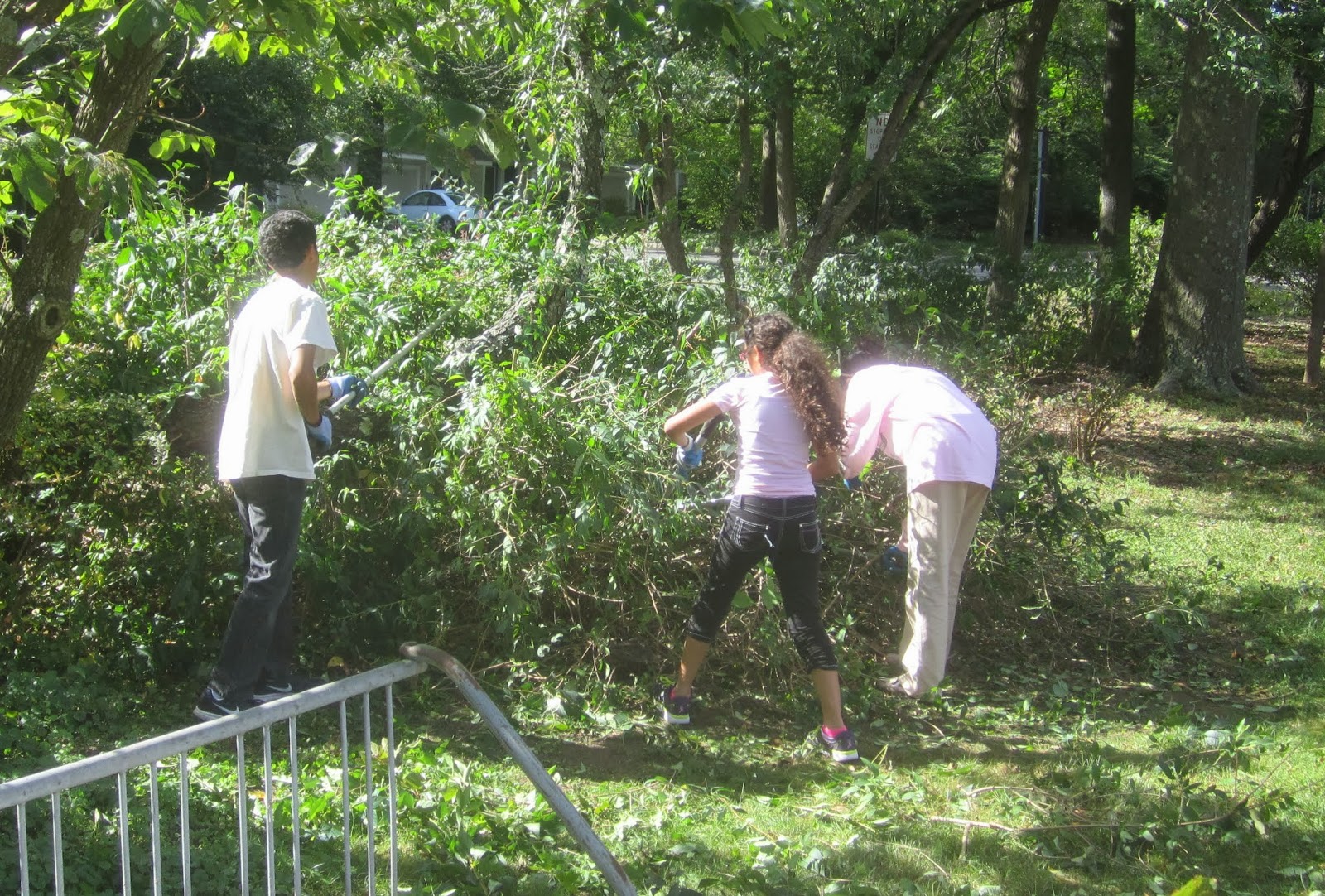 The world throws plenty of obstructions in the way of doing the right thing, but sometimes all of those obstructions fade into the background and good things start to happen. For two days, I rode a wave of positive energy, as people expressed a love of inner and outer nature, through tending and attending, spiffing up, getting down, riffing melodies, lopping, chopping and bebopping, blazing trails and just being simply amazing. It all started with the customary Sunday morning gathering of volunteers to spiff up Pettoranello Gardens. 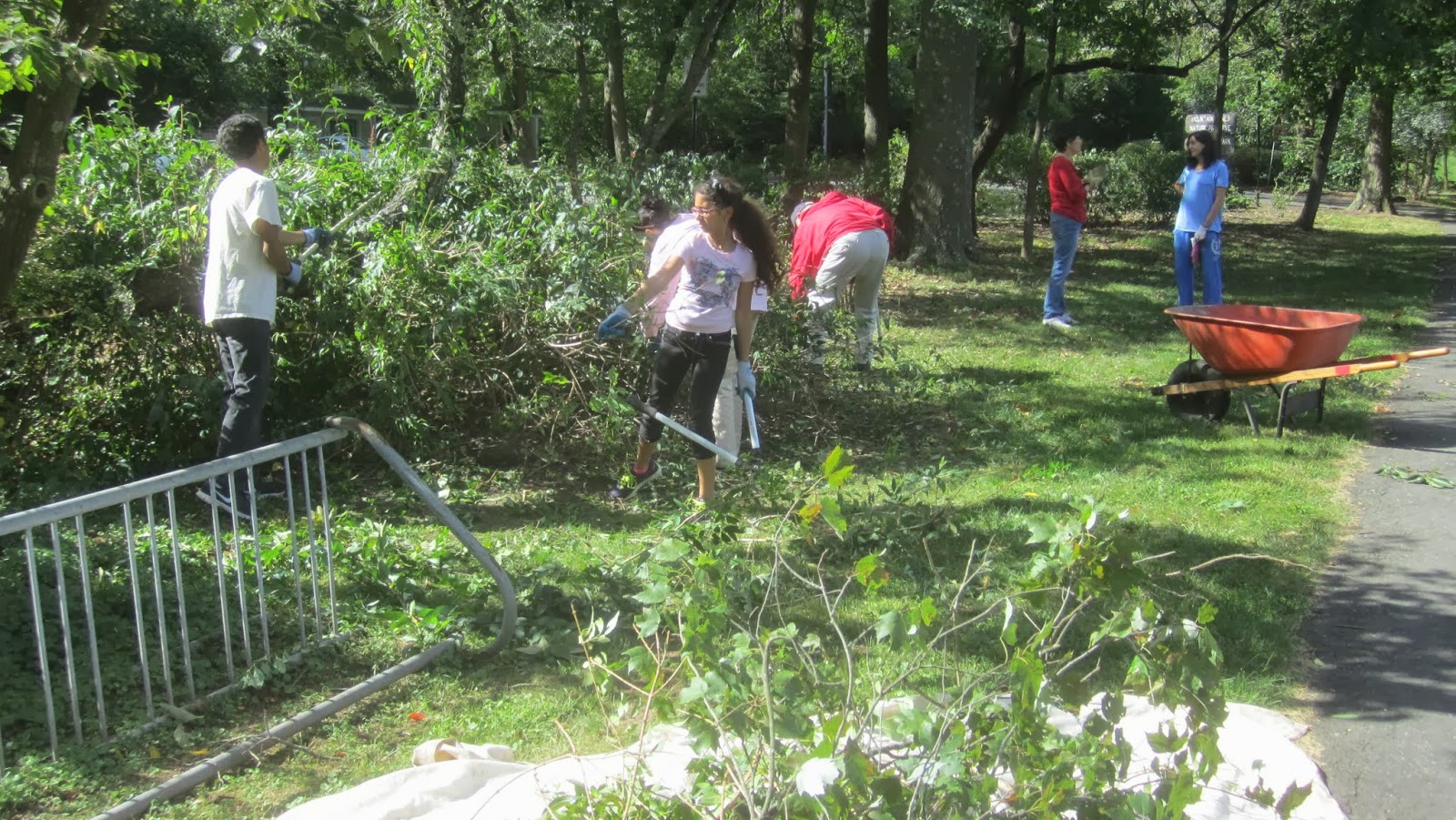 This time, the regulars with the Pettoranello Foundation were helped out by members of the Rotary Club, an organization that does good works here and abroad. Along with the rewards of physical work, these workdays offer a chance to catch up with old friends. 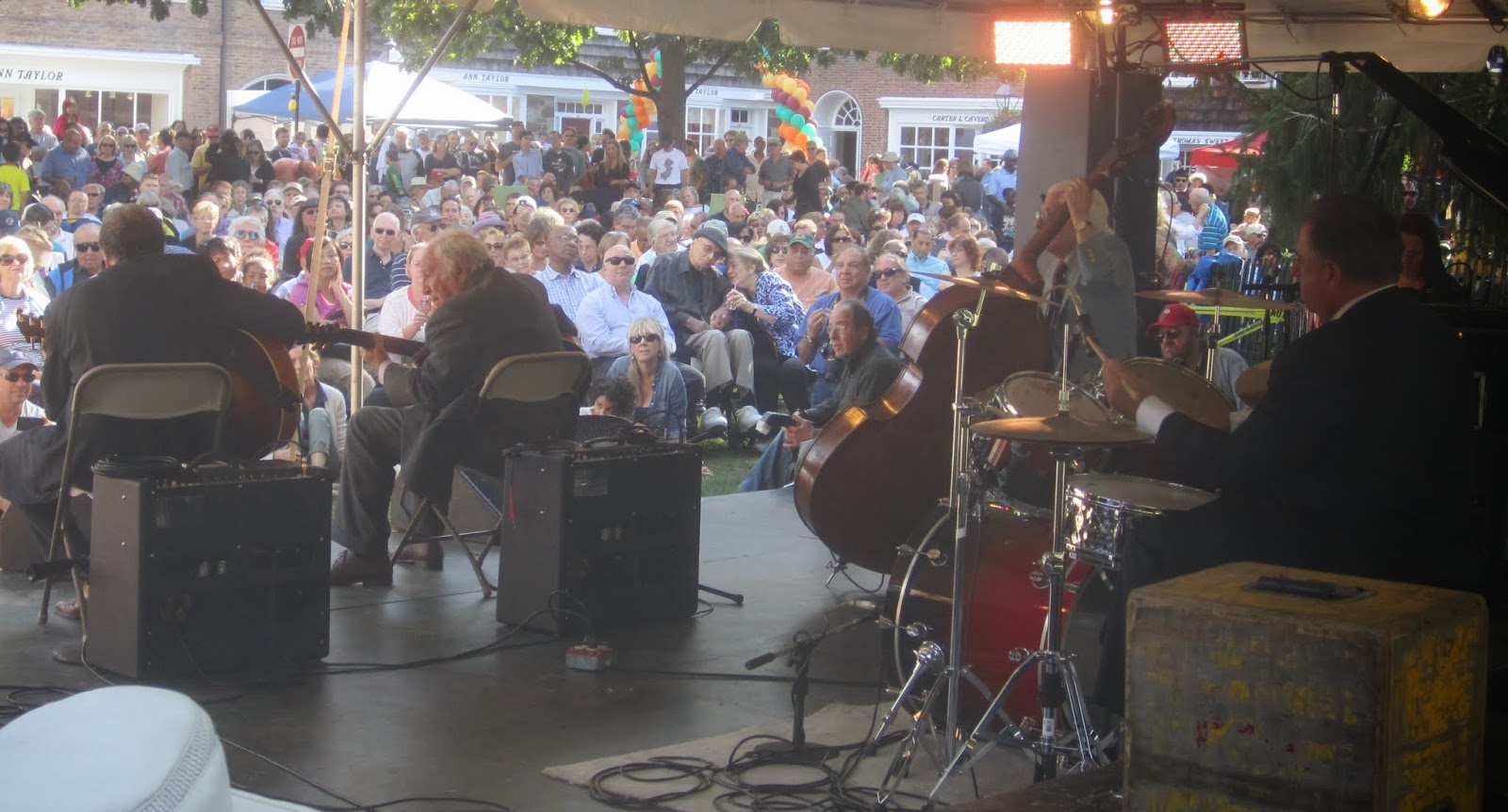 Next stop was the Jazz Feast, featuring five groups, with guitar great Bucky Pizzarelli who's still digging deep into the grooves at 87, 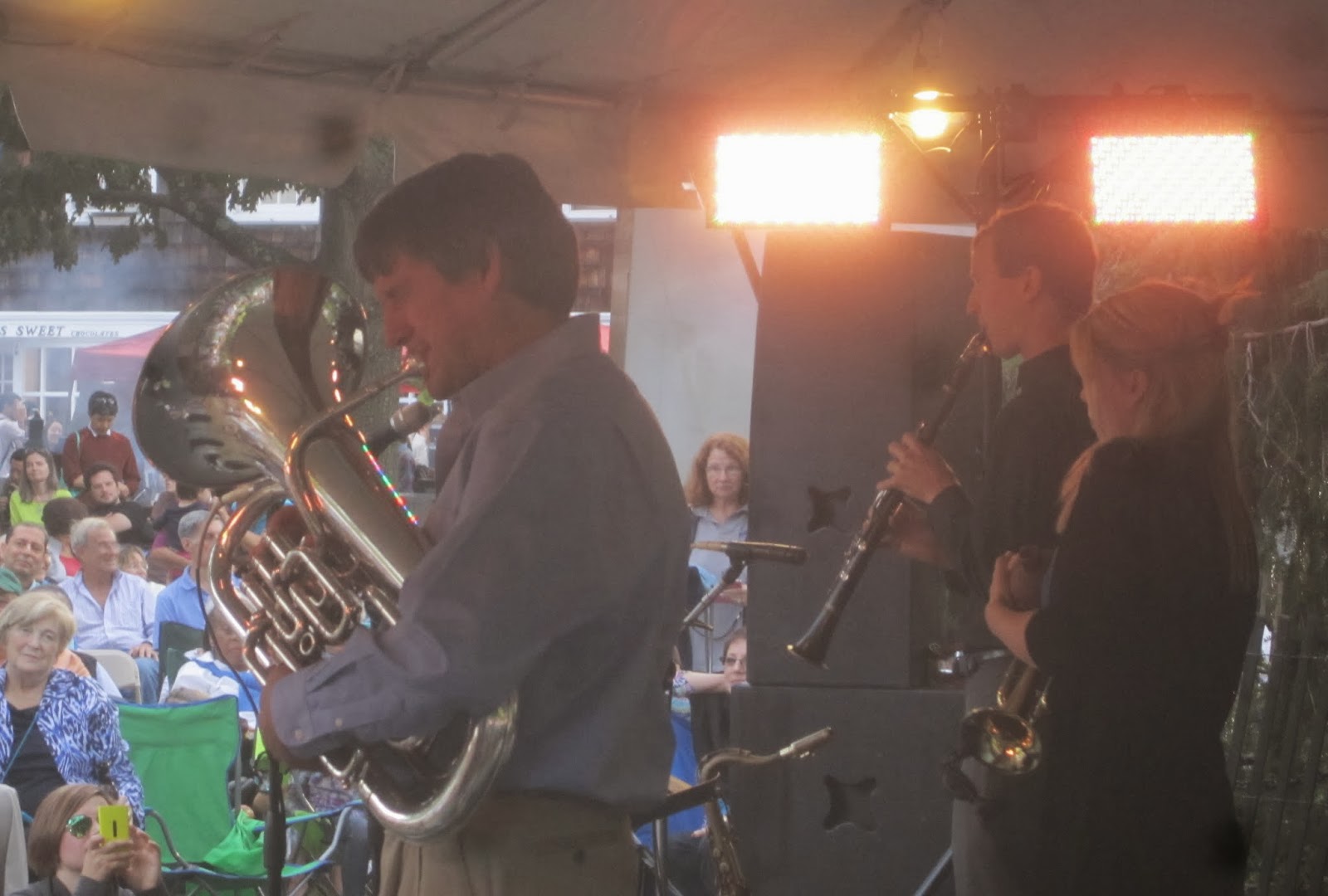 and a very talented group led by British Columbia native Bria Skonberg. Her trumpet style harkens back to Louis Armstrong, with some innovative touches ala Jimi Hendricks thrown in. She mixes mean trumpet with sweet vocals on tunes like Sunny Side of the Street. 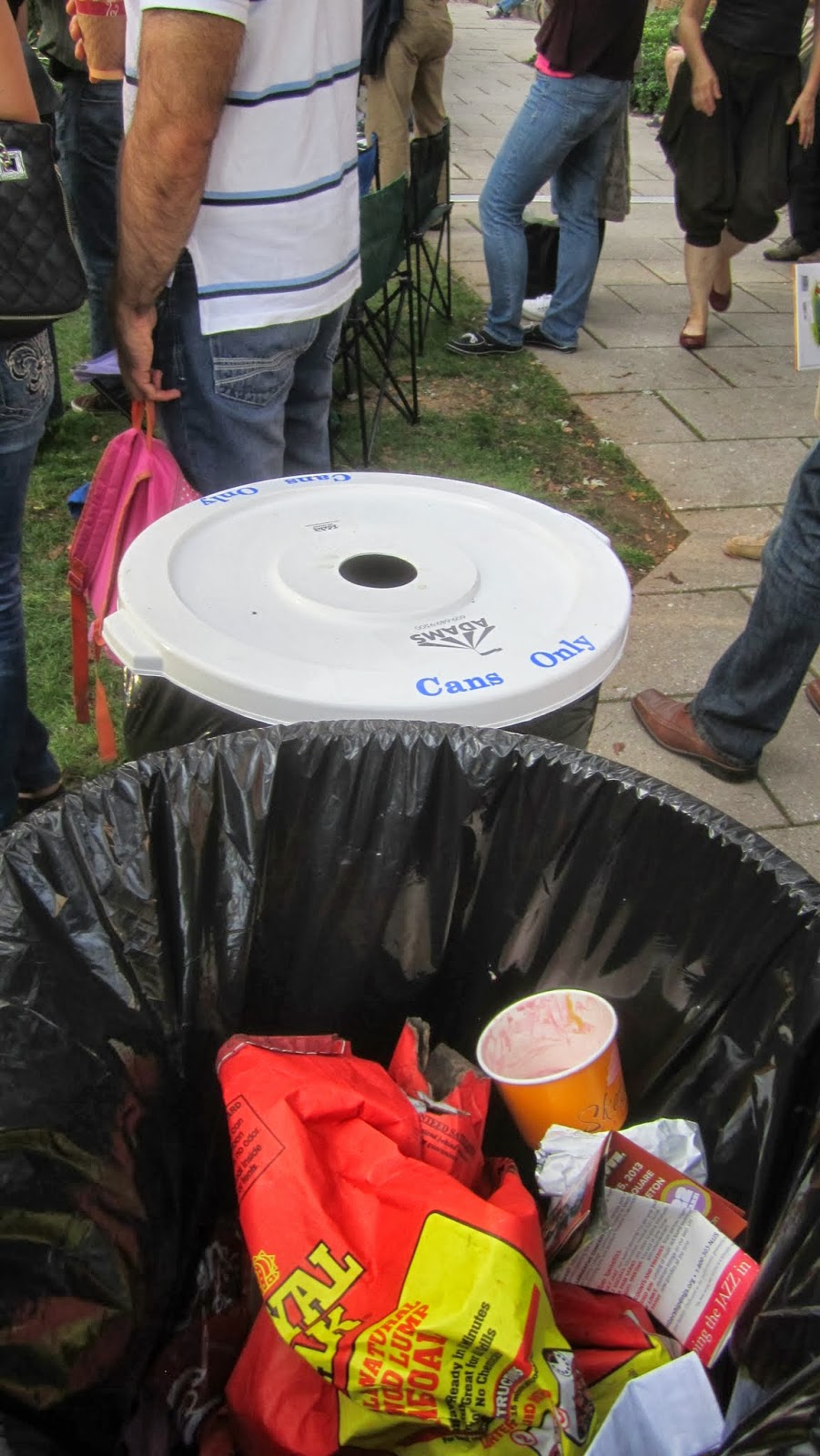 Meanwhile, on the post-consumer side of the festival, there was an innovation from the previous year in the fling department, as the organizers demonstrated the benefits of covering the recycling receptacle with a lid with a small hole, so trash would be less likely to mix with the empty bottles and cans. 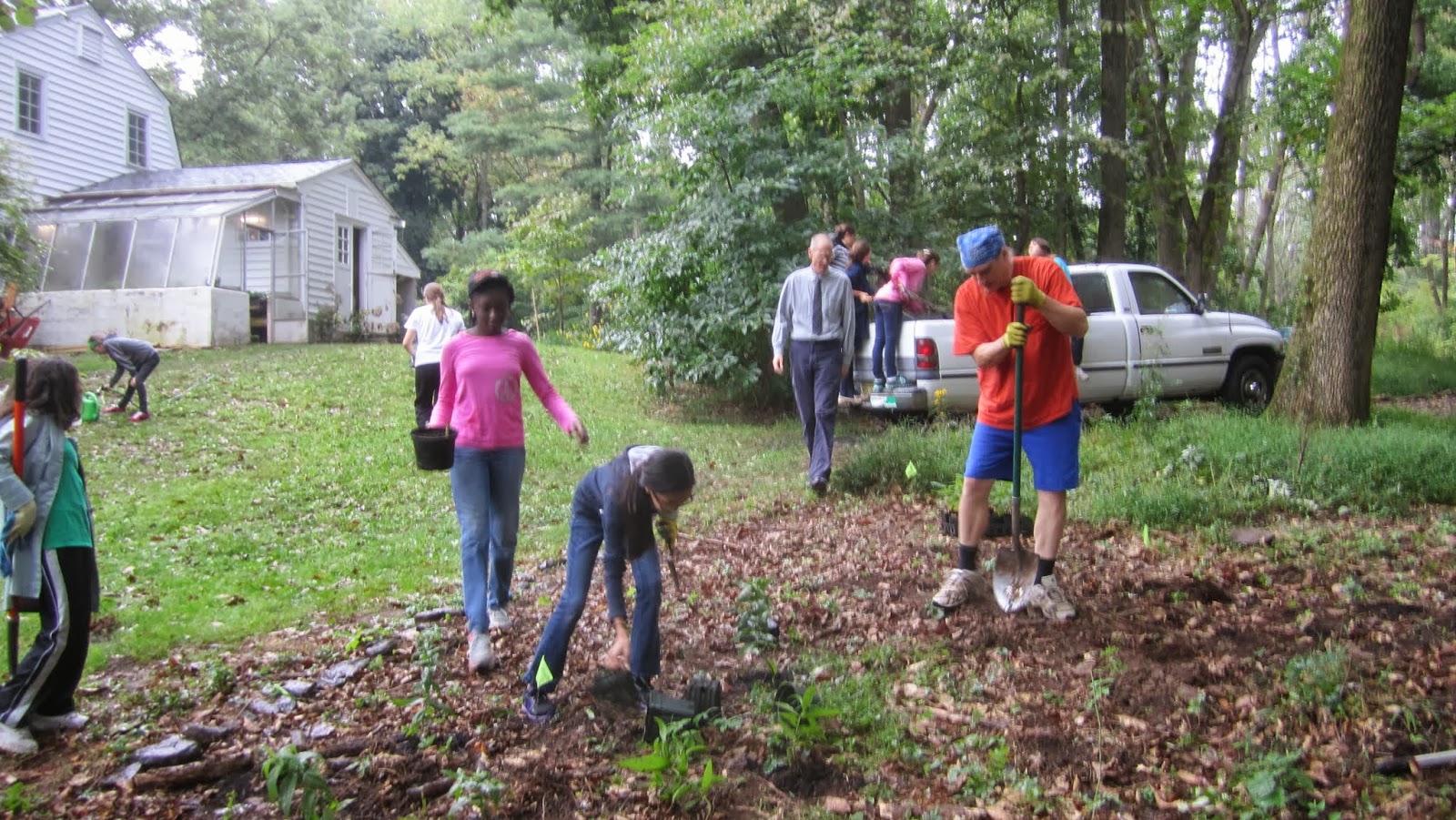 After being part of the record crowds at Palmer Square, it was back the next morning to Princeton's nature preserves, with 38 Stuart School 7th graders arriving at Mountain Lakes to plant native wildflowers as part of a habitat restoration project. This workday was meaningful on multiple levels. Stuart School shares the same watershed with Mountain Lakes, which is to say the water from the school's roofs, parking lots and athletic fields flows down through the lakes. The kids were discovering, and tending to, the watershed beyond the boundaries of their school.

The plants, meanwhile--all grown from seed collected from local, indigenous populations--were grown in the greenhouse just a few steps away from the restoration site. One thing we've learned the hard way in restoration work is that it's best to start close in and work our way out, rather than choose a remote site that involves a long haul and less convenient follow up. 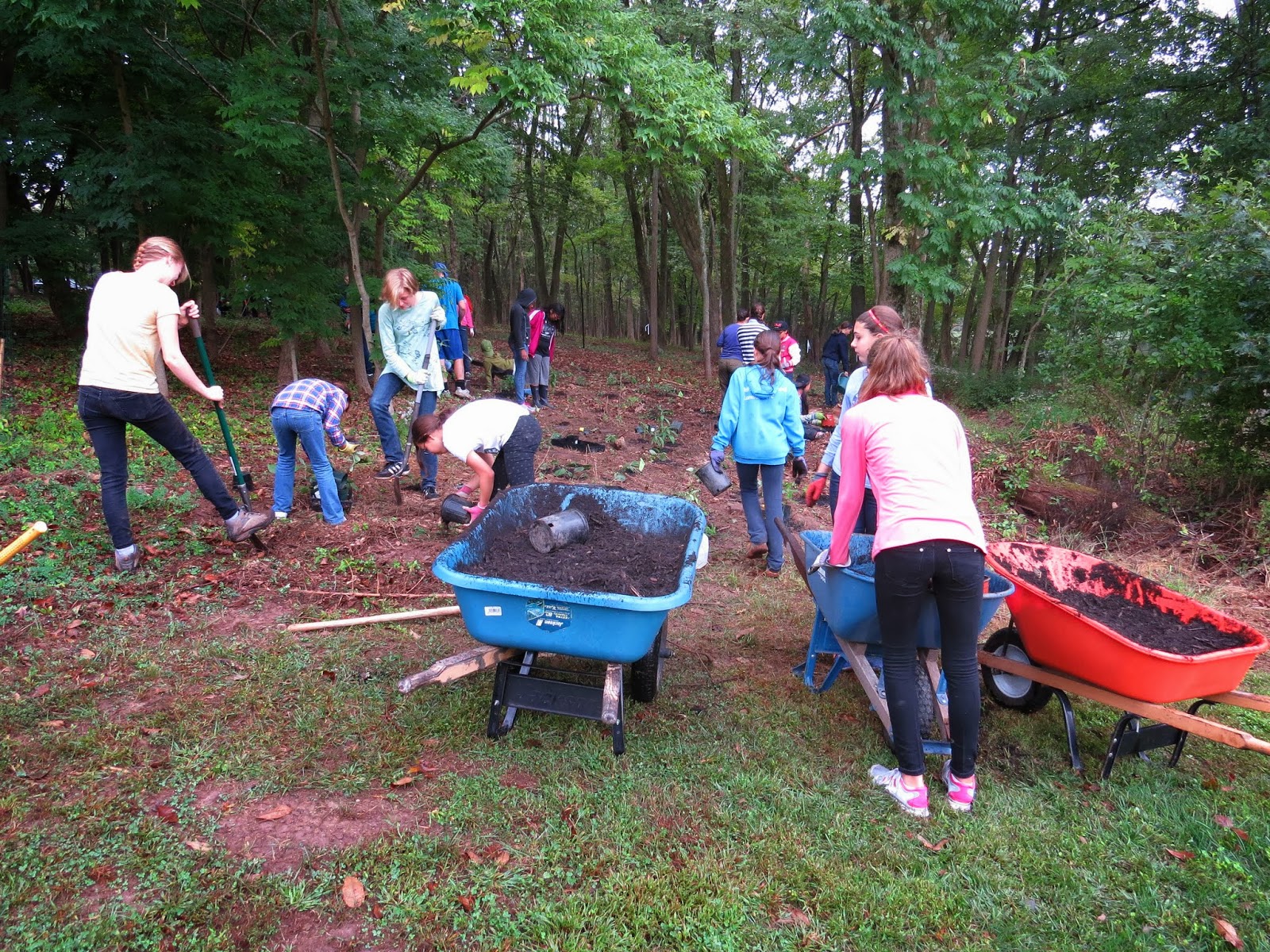 Aelin Compton (left), who followed me at the Resource Manager position I encouraged Friends of Princeton Open Space to create years back, was happy as could be with all the spirited help. Clark Lennon and Andrew Thornton, frequent volunteers at Mountain Lakes, were on hand to help channel all the energy. 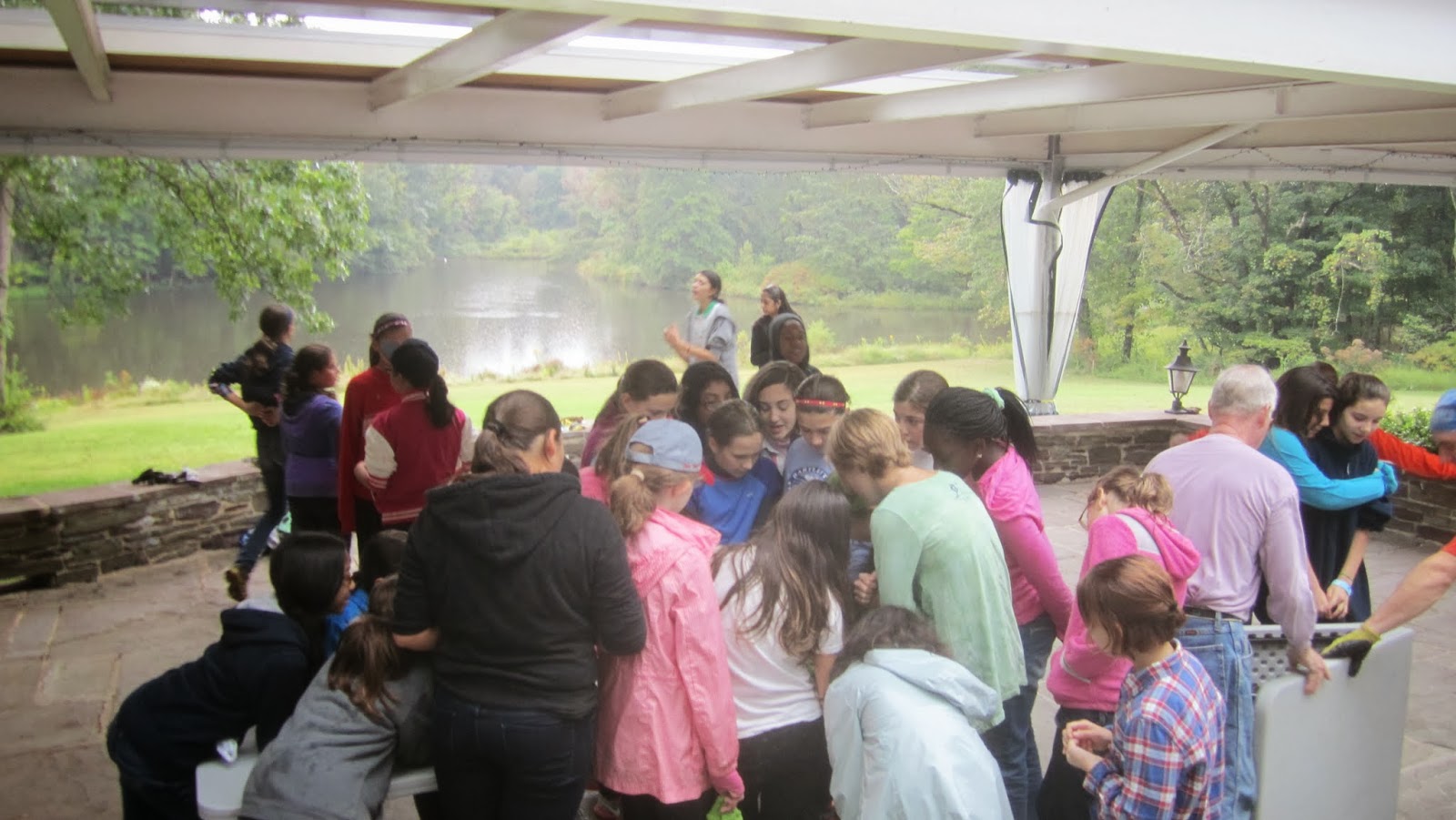 Even a brief rain turned out to be a plus. With the kids gathered under the patio roof, I happened to find a little frog in the grass and set it on a table without saying a word. Instant excitement and fascination. That frog was like a rock star, or a pond star. 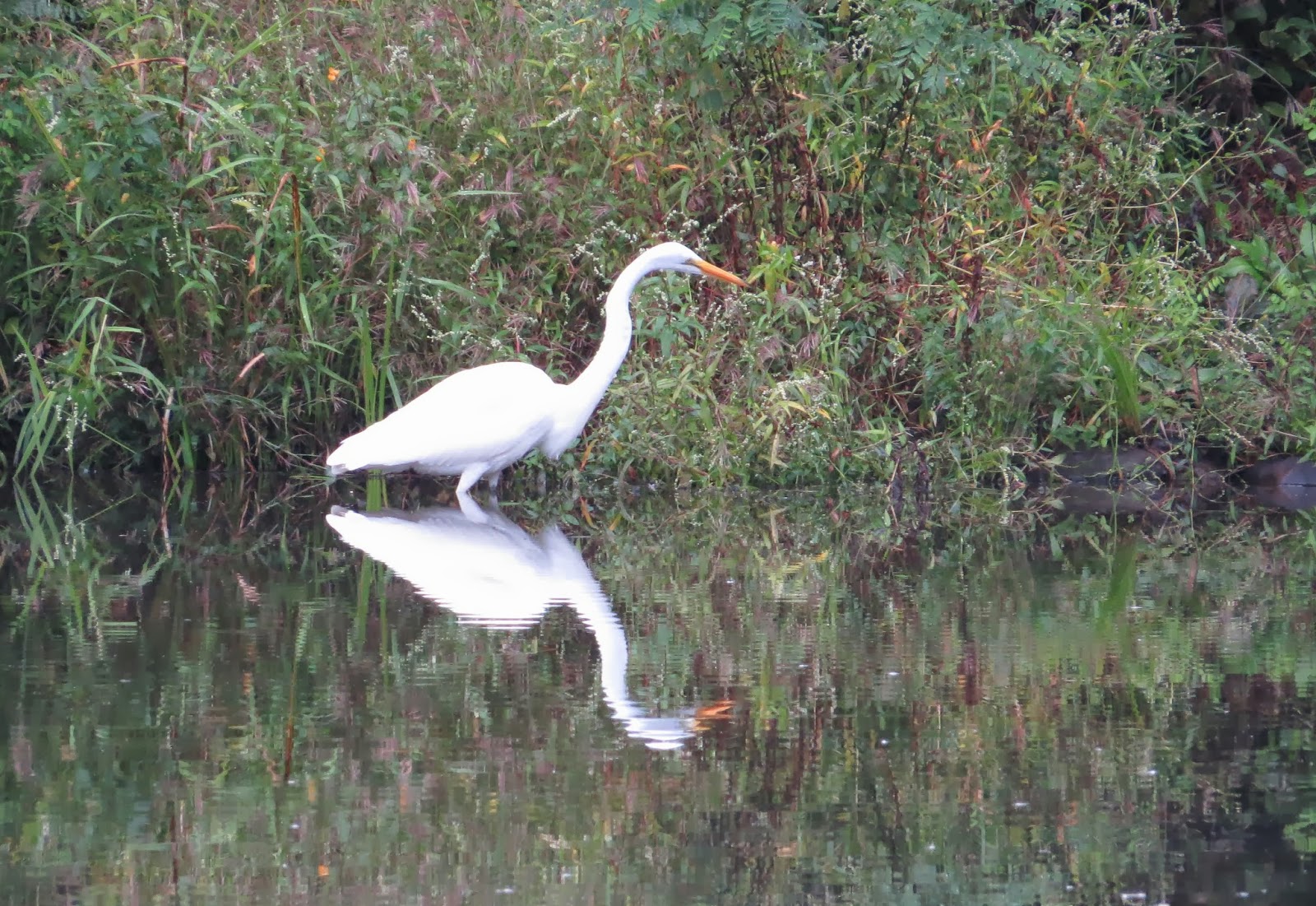 We did a Rorschach test with this photo. Is it a crab? The skull of a steer? 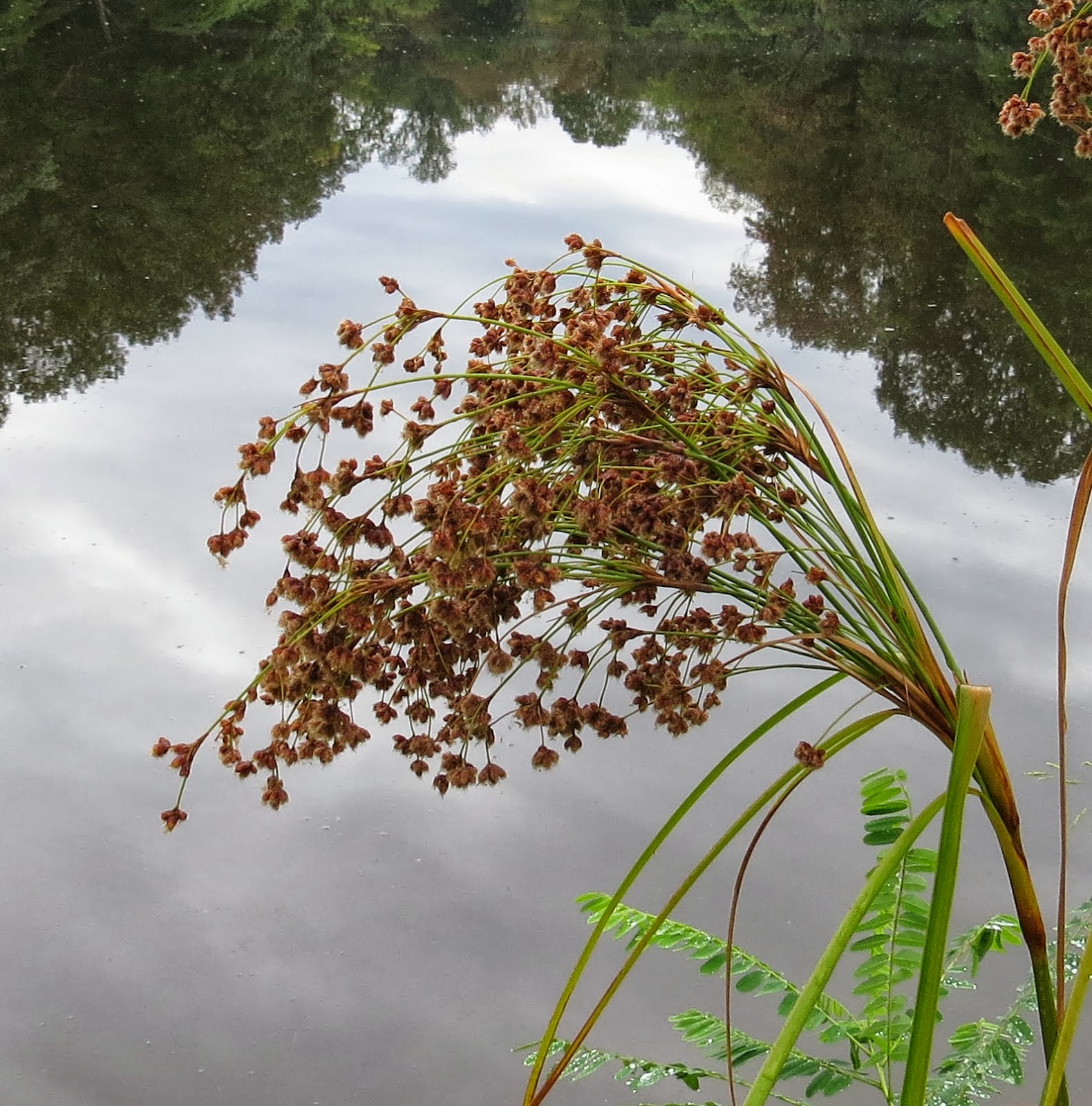 One of my favorite sedges, called woolgrass, was growing in the vegetated buffer along the upper lake's edge. Most native sedges start early in the spring and are by now flopped over and looking spent, but woolgrass gets a later start and keeps its form. 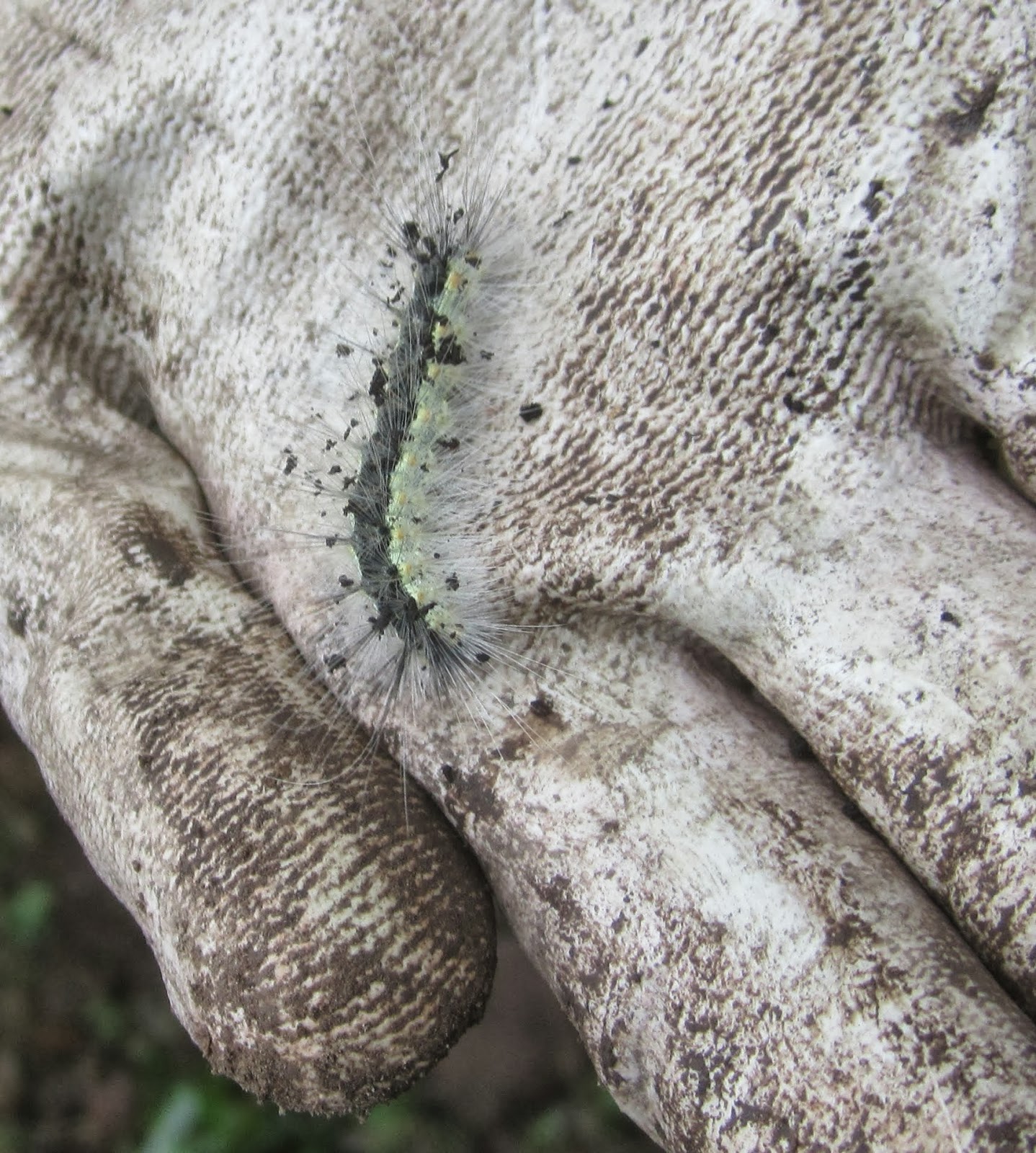 Work and discovery went hand in glove. Not sure what the caterpillar is. 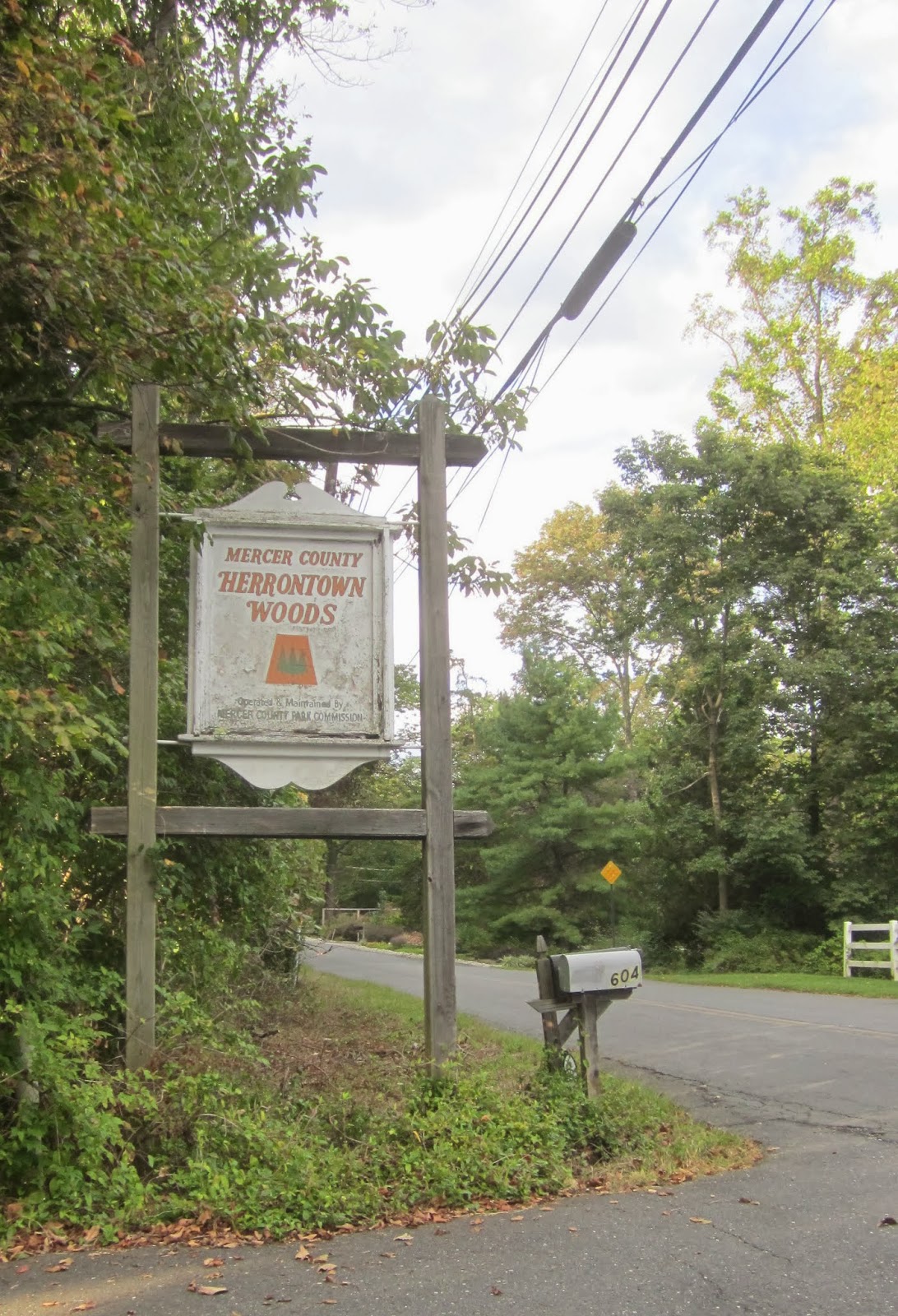 Then it was off to the other side of town, heading northeast out Snowden Lane to Herrontown Woods for the afternoon. Deep caring and determination is finding all sorts of expressions out that way, starting with the sign itself, which Kurt Tazelaar has liberated from the enveloping foliage. 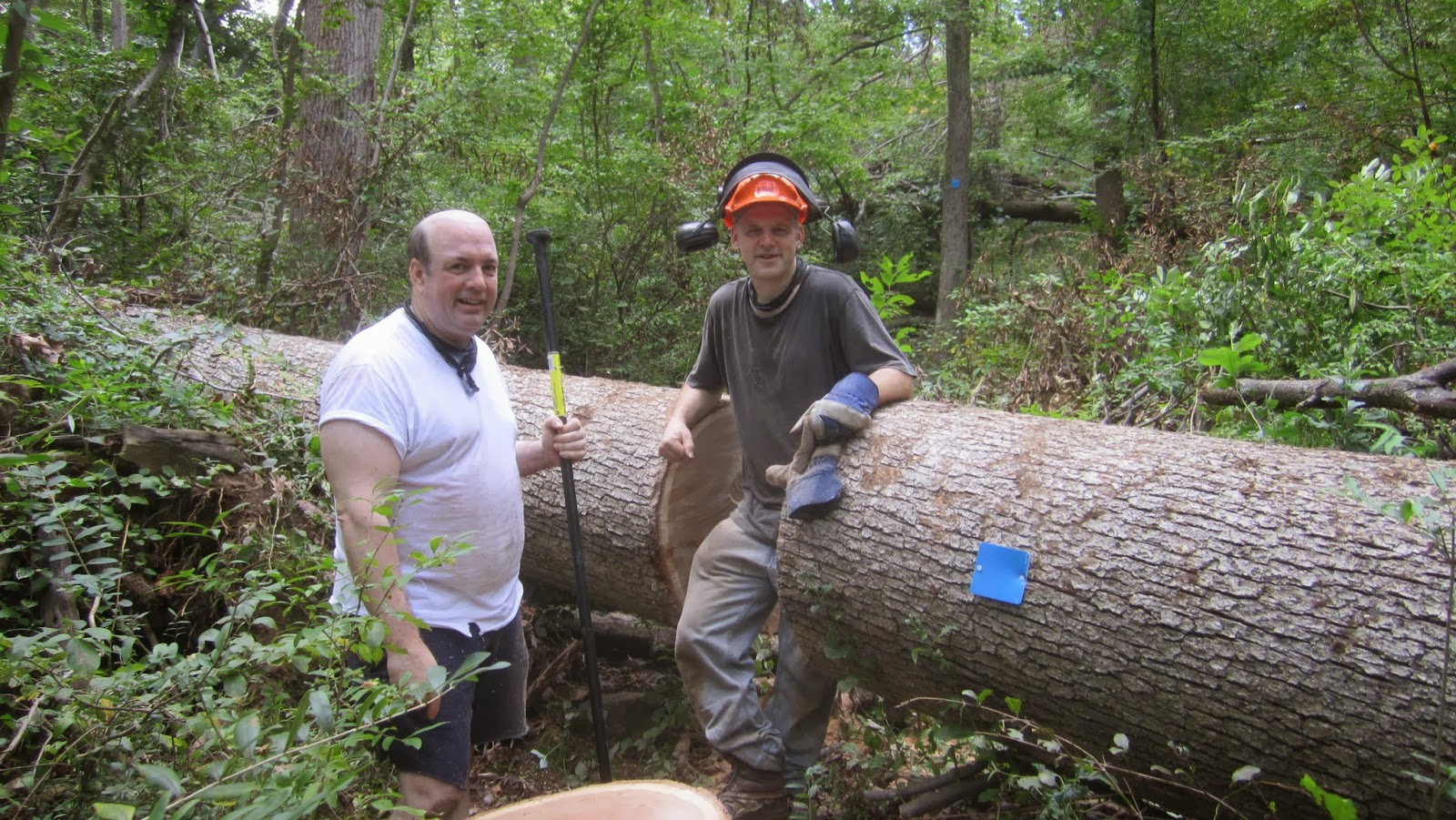 Kurt is standing in the initial opening he cut through the one remaining windblown obstruction on some 200 acres of trail he and Sally Curtis cleared in Herrontown Woods and Autumn Hill Reservation over the course of two months. Kurt's brother, John, who back in the 70s at Little Brook Elementary would walk with his classmates to Herrontown Woods for field trips, found himself enlisted in the cause for a couple days while visiting town. Many of the trails had been impassable for years. Volunteer hours, including some of my own, are approaching 400 for this renovation. 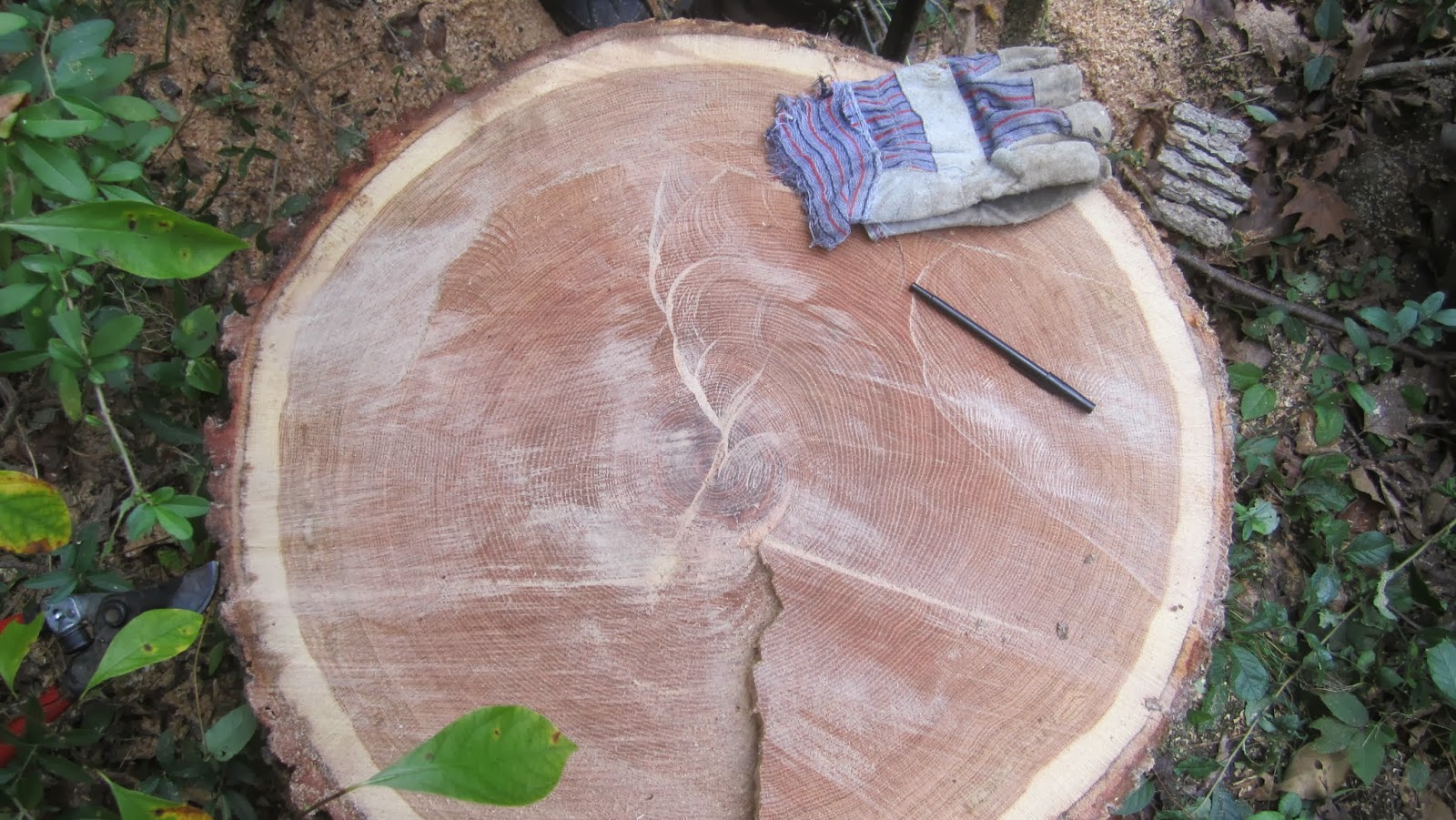 A rough count of tree rings on this white oak show that it was growing before the 1870 farm cottage was built nearby.