Monarchs--A Miracle in Need of a Miracle As monarch butterflies begin their migration south towards a home they've never seen but somehow know how to get to, in the mountains northwest of Mexico City, the annual miracle we've long taken for granted appears threatened. Overwintering numbers were down by 60% last winter from the year before. The total population of eastern monarchs occupied only three acres in Mexico's 130,000 acre mountain preserve. The word from New Hampshire to Michigan is that sightings are way down this year. I've seen only two of these beautiful creatures in my wildflower-packed backyard this summer, and none laid eggs on the many swamp milkweeds. What a contrast with 2007, when we had great numbers of larvae, some of which we grew in a glass bowl and later released.

Though threats of logging in the overwintering forest have now been greatly reduced, the monarchs face the increasing weather extremes associated with climate change, and the increasingly hostile North American landscape. In other words, the struggle to save the monarchs has shifted from a point source problem (their overwintering habitat) to a nonpoint source problem (the quality of habitat across the eastern U.S. and Canada).

Above all, Monarchs need to encounter milkweed as they head north from Mexico into Texas, then fan out across the midwest and east coast, with one generation giving way to the next. Last year, deep drought in Texas and elsewhere desiccated what milkweed they could find, but the even bigger problem is 100 million or more acres of farmland that once hosted some milkweed, but now have been converted to Roundup Ready corn and soybeans. 90% of corn is now grown in this way, eliminating most weeds. Fields are planted right up to fencelines and roadsides, eliminating even the borders that once were havens for milkweed. 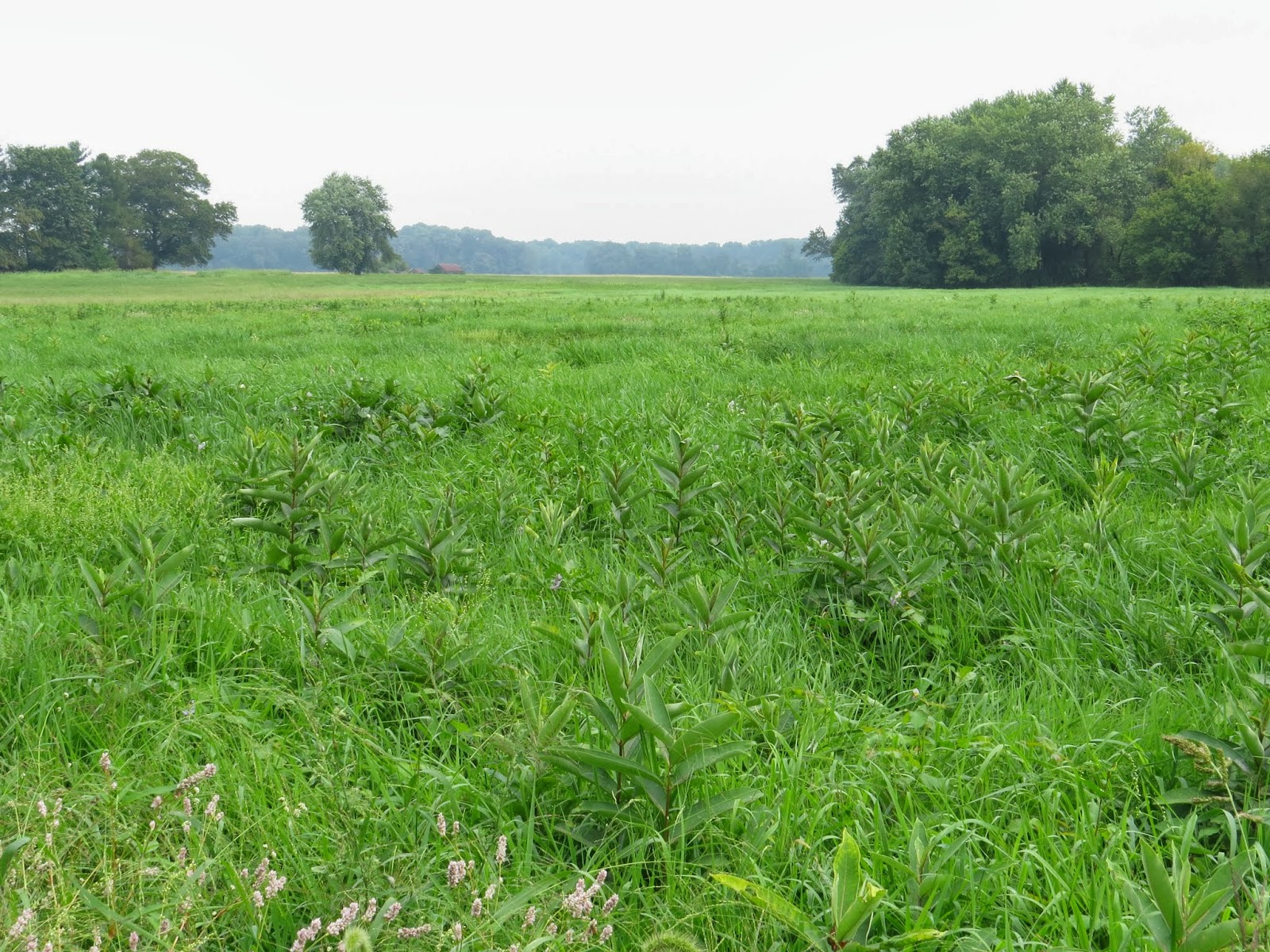 If you drive out Quaker Bridge Road in Princeton, you can see milkweed rising up above the other weeds in a fallow field. Compare this with the picture at this link, of a corn field in Iowa. Corn for as far as the eye can see.

The photo here on the left (closeup below) shows patches of common milkweed (Asclepias syriaca), which spreads underground and is the most common around Princeton. Swamp milkweed blooms later, doesn't spread, and has softer leaves which you'd think the larvae would prefer, but not necessarily. Butterflyweed is a particularly beautiful milkweed with a disk of brilliant orange flowers, occasionally seen in drier meadows. There are additional prairie species of milkweed rarely encountered hereabouts. 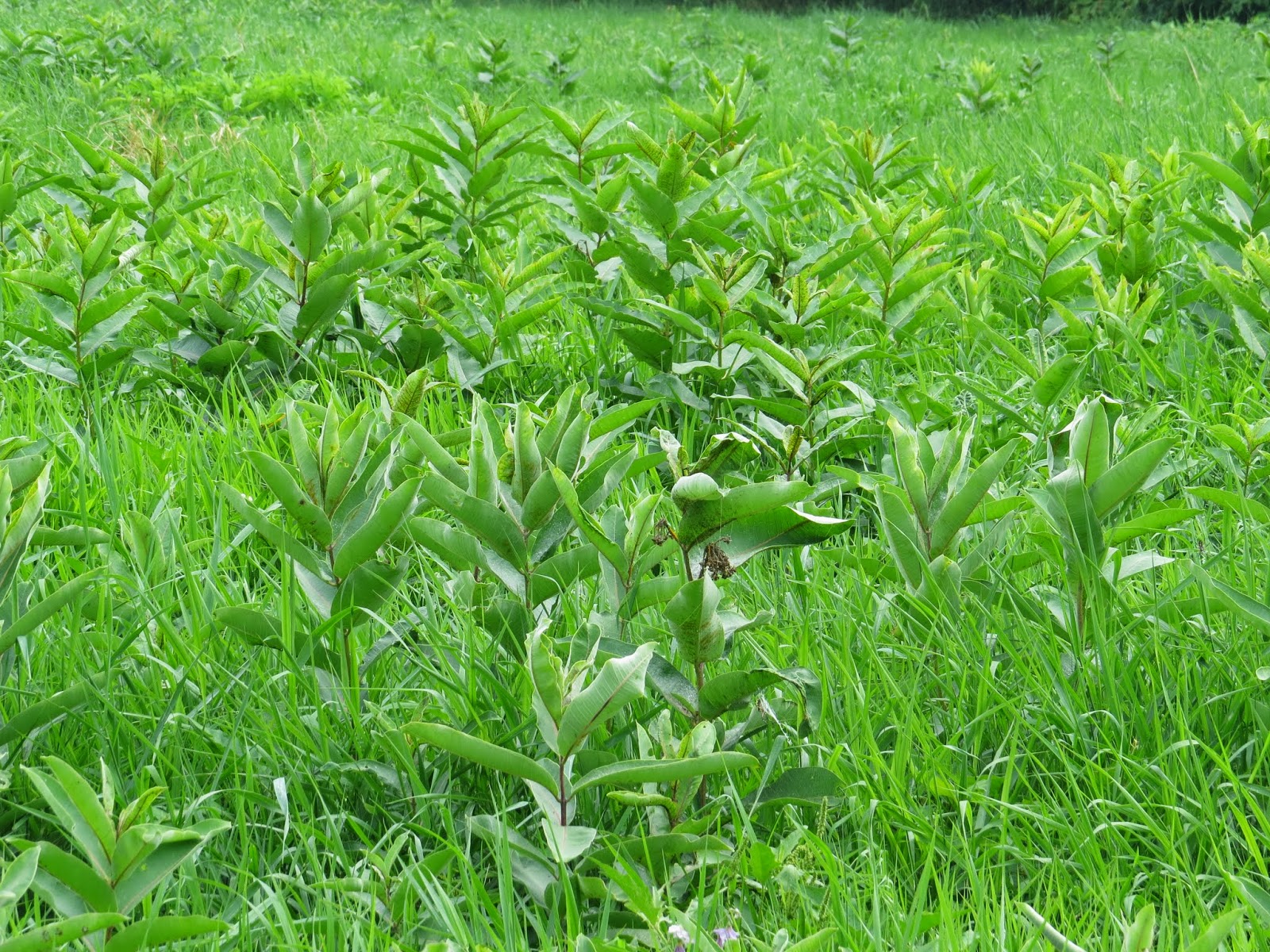 With America's heartland becoming so hostile to Monarchs, the question increasingly becomes whether the butterflies will be able to make it to New Jersey in sufficient numbers to take advantage of the milkweed growing here. In the past ten years, acreage of overwintering butterflies in Mexico has dropped from 25 down to 3. The Roundup Ready corn was first sold commercially in 1998. Overuse of Roundup for growing these genetically engineered crops has led some weeds like giant ragweed, pigweed (both of these species grow in Princeton), and many others to gain resistance to glyphosate, the active ingredient in Roundup. Presumably, milkweed has yet to develop resistance. 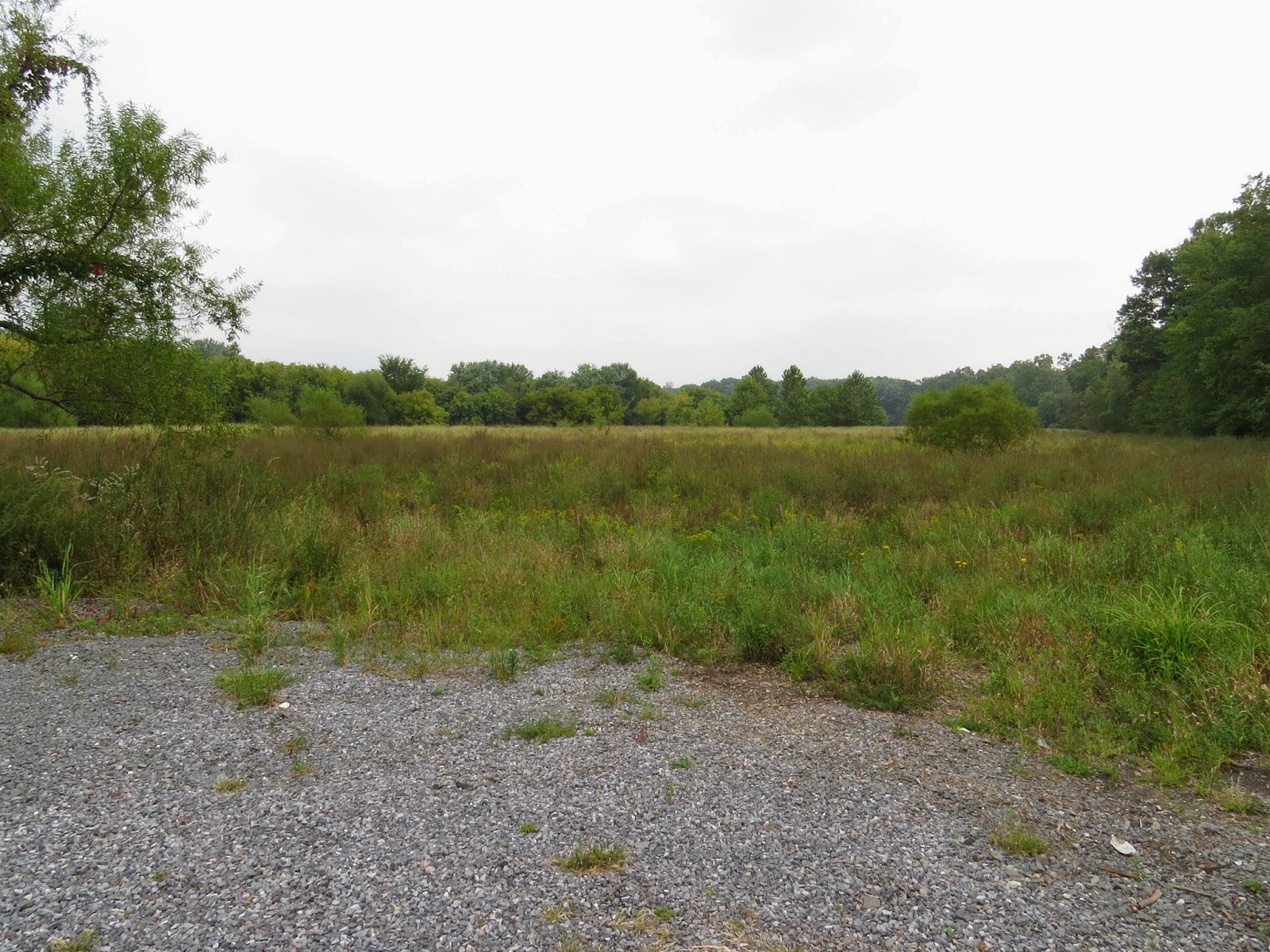 On the way out to Route 1, I stopped recently near the canal on Quaker Bridge Road to look out on a field where once I saw many Monarchs feasting on a sea of yellow tickseed sunflower (Bidens) blooms. Almost no Bidens there this year, for whatever reason. 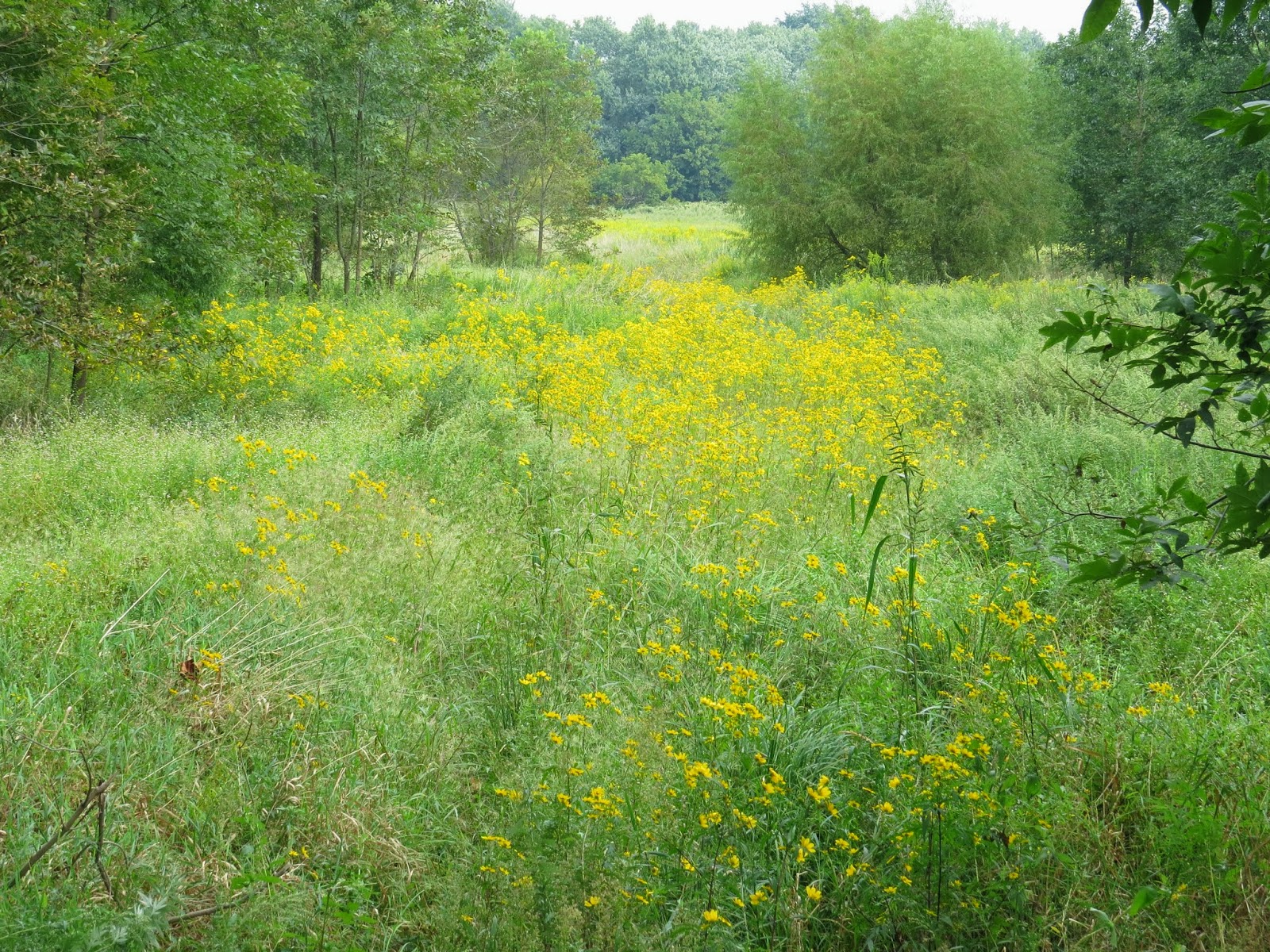 Further down the road, near the canal bridge, there was some Bidens, but no Monarchs. Neither did I see any Monarchs on the ribbon of yellow blooms along the right of way at the Sourlands Mountains Preserve the week before. 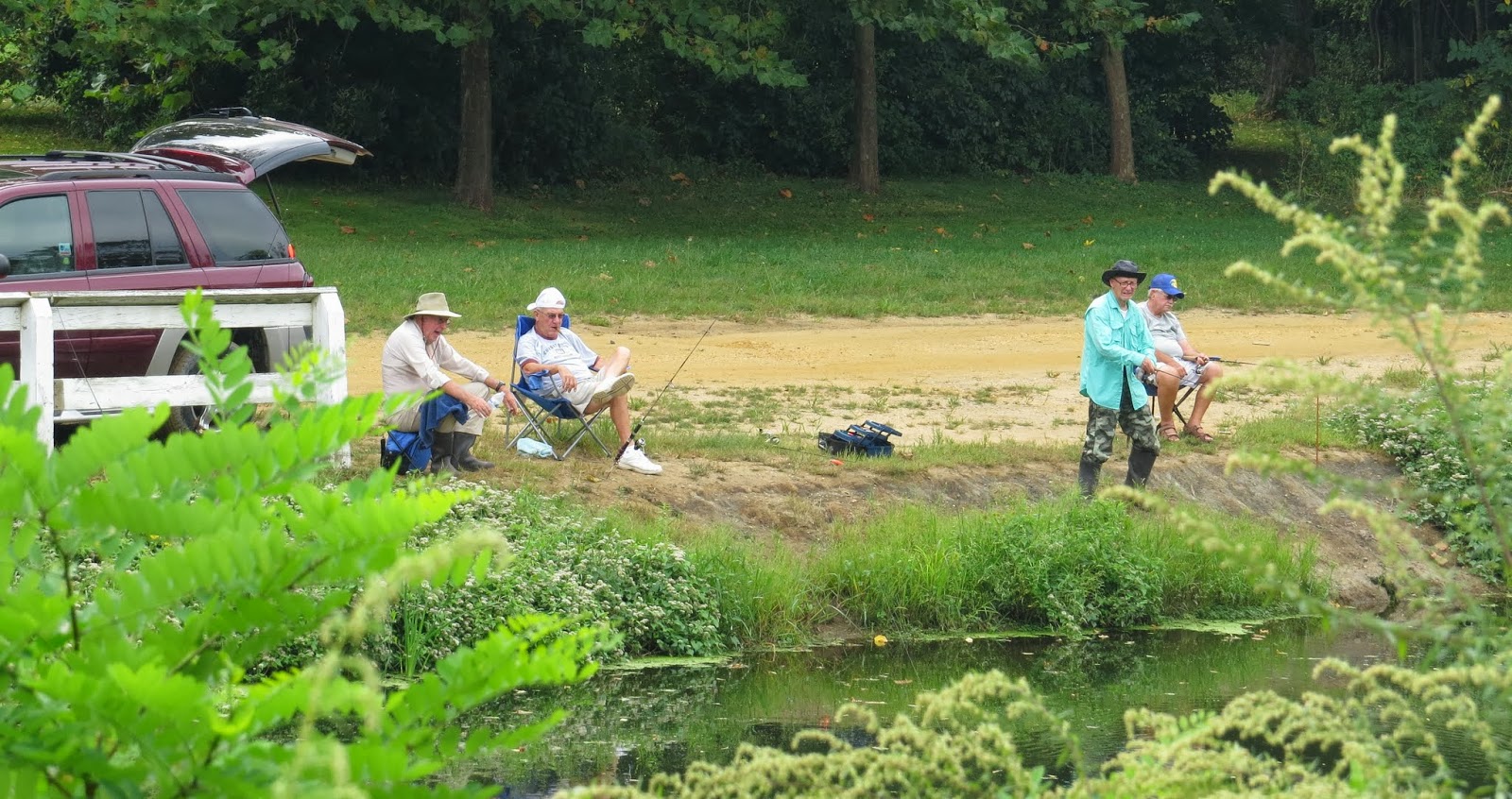 I doubt these fishermen at the DR Canal noticed any change in the air. 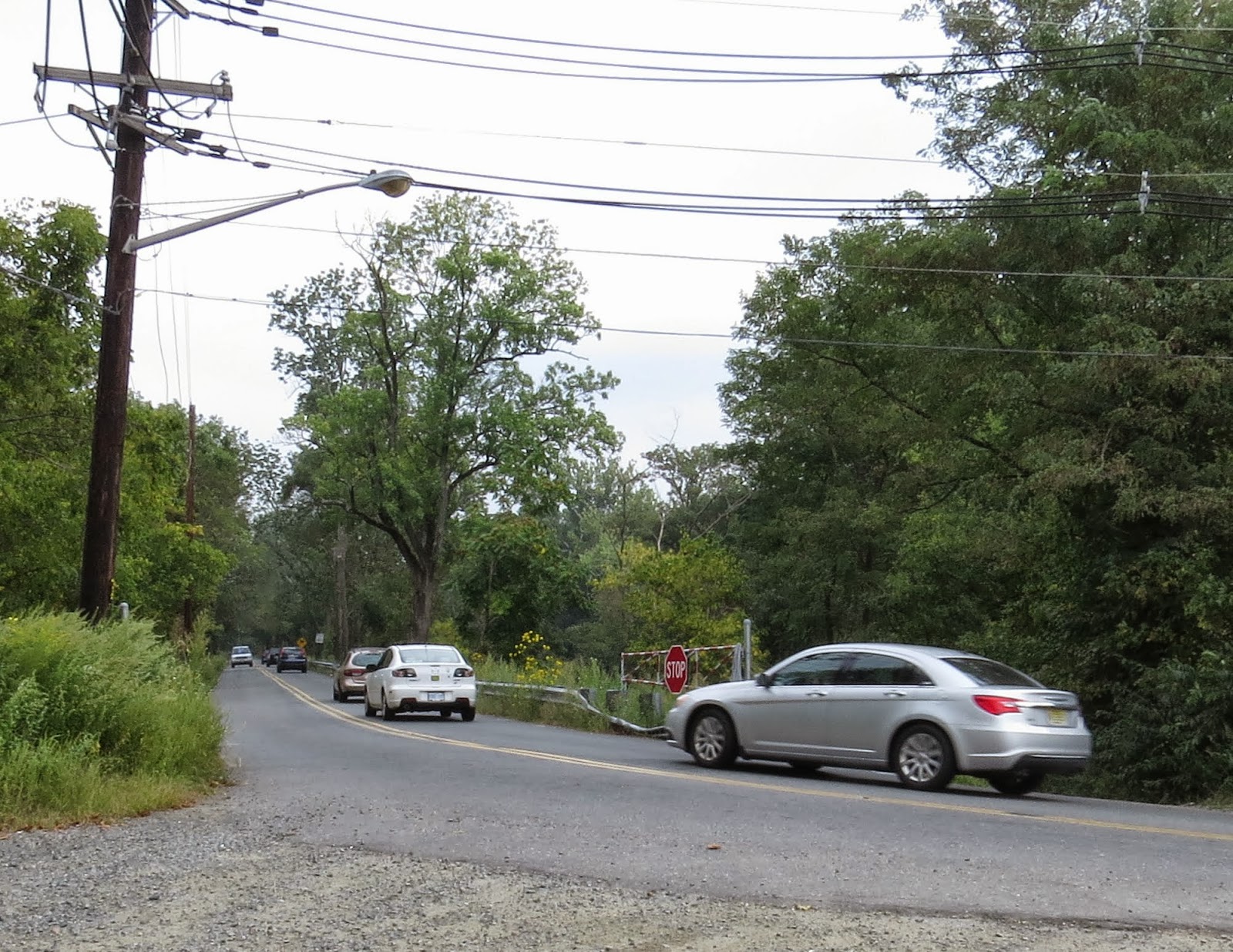 Certainly drivers navigating narrow Quaker Bridge Road would not take note of any absence in the fields around them. The state of the monarch is but one of the changes quietly happening in the blur of green off to the side as we race forward.

It would be a relief if their numbers rise again, as they did after a very low year in 2004/05, but the trend is towards more agricultural herbicide and unstable climate, not less.

One question at the back of my mind is whether they depend at all on large numbers, to find each other to mate, and to make the long flight back to Mexico. Might large numbers help their momentum as they migrate, much like we are swept along by the momentum of the crowd on an urban sidewalk? 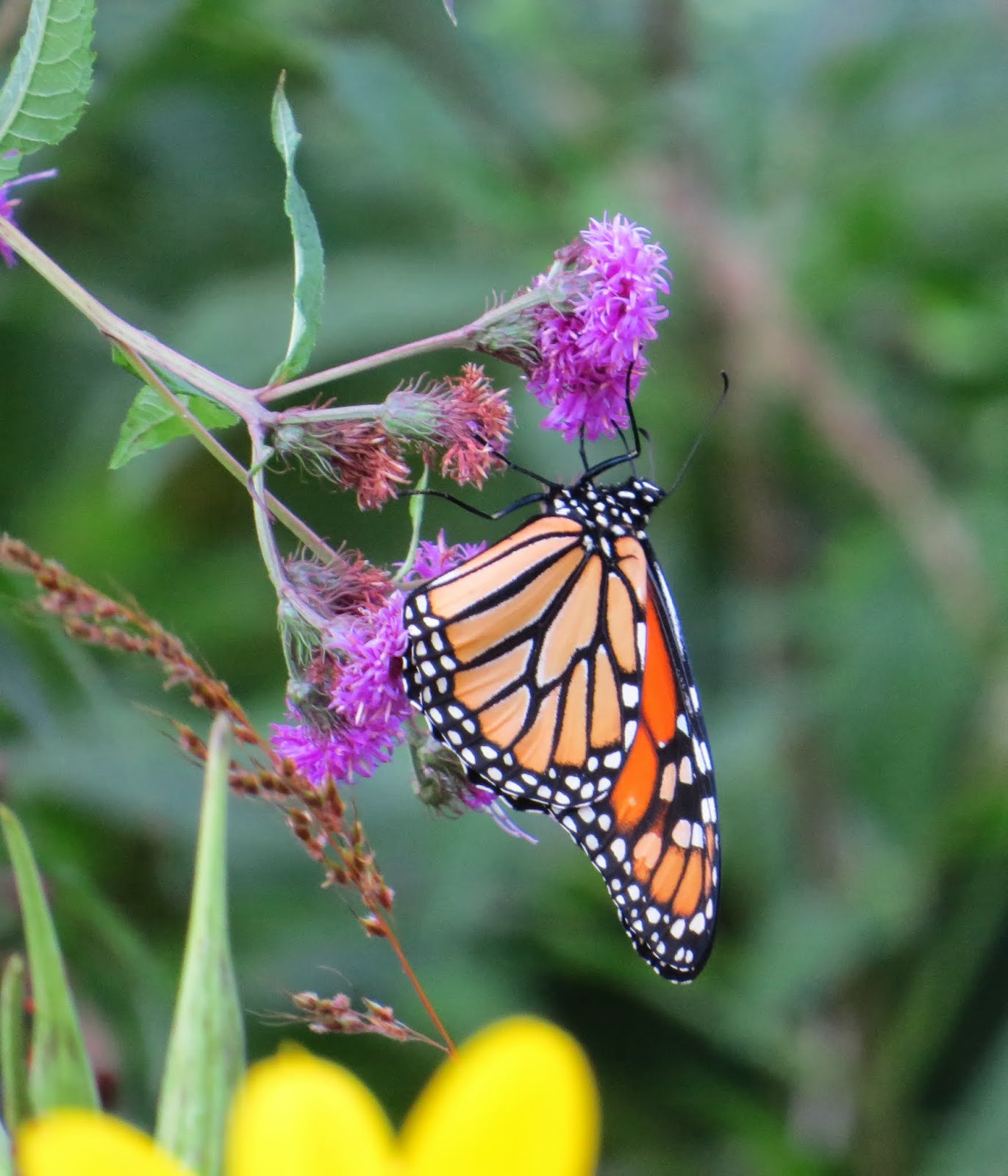 After a long drought in sightings, the visit from this monarch in my backyard a few days ago, feasting for an hour on aster and ironweed nectar, was a real gift. I wish for the past luxury of taking them for granted, though it's hard to think of them with anything but a sense of wonder. Now, this miracle needs another--a nation that cares enough to change its farming practices and the kind of energy it uses, if not for the Monarch, then for ourselves.

There was one day, as a boy walking home across the expansive lawn of Yerkes Observatory in Wisconsin, when I looked up to see the sky completely filled with Monarchs passing through. Such a sight stays with you forever. Though the memory is mine, it is each year's new generations of Monarchs, migrating 2500 miles to New Jersey, that bring it back.

In New Jersey, monarchs migrating south get channeled through Cape May. Here's a blog with daily updates on numbers.

Below are some articles:

One on NPR radio, another in The New York Times,
and a USAtoday article, which may pester you with an ad on an attached video.

An explanation of how they navigate can be found here.
Posted by Steve Hiltner at Tuesday, September 24, 2013