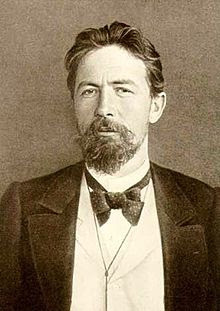 Up until a few months ago, a photo of the playwright Anton Chekhov would have seemed the last image to include on a blog about nature. But this past fall, after theatrical scenes for a tragicomedy on climate started coming to me, I decided to enroll in an acting course at the adult school in town. Though the experience was completely different from anything I had tried before, the character I was asked to play, Astrov in Chekhov's 1897 play, Uncle Vanya, bore an uncanny resemblance to a modern day environmentalist. He's a doctor who loves forests and struggles to save them from wholesale destruction.

In the quotes below are prescient mention of climate, the beneficial effect of a healthy natural world on people and culture, the satisfactions of restoring woodlands, and the unending conflict between the human power to create and the economic imperative to destroy for short-term gain. As remains common today, Astrov's pronouncements about nature and its value are met with a mix of praise and skepticism by the other characters.

SONIA. No, the work is thrilling. Dr. Astrov watches over the old woods and sets out new plantations every year....................He says that forests are the ornaments of the earth, that they teach mankind to understand beauty and attune his mind to lofty sentiments. Forests temper a stern climate, and in countries where the climate is milder, less strength is wasted in the battle with nature, and the people are kind and gentle. The inhabitants of such countries are handsome, tractable, sensitive, graceful in speech and gesture. Their philosophy is joyous, art and science blossom among them, their treatment of women is full of exquisite nobility——


ASTROV: ........I don't object, of course, to cutting wood from necessity, but why destroy the forests? The woods of Russia are trembling under the blows of the axe. Millions of trees have perished. The homes of the wild animals and birds have been desolated; the rivers are shrinking, and many beautiful landscapes are gone forever. ....................Who but a stupid barbarian could burn so much beauty in his stove and destroy that which he cannot make? Man is endowed with reason and the power to create, so that he may increase that which has been given him, but until now he has not created, but demolished. The forests are disappearing, the rivers are running dry, the game is exterminated, the climate is spoiled, and the earth becomes poorer and uglier every day. [To VANYA] I read irony in your eye; you do not take what I am saying seriously, and—and—after all, it may very well be nonsense. But when I pass peasant-forests that I have preserved from the axe, or hear the rustling of the young plantations set out with my own hands, I feel as if I had had some small share in improving the climate, and that if mankind is happy a thousand years from now I will have been a little bit responsible for their happiness. When I plant a little birch tree and then see it budding into young green and swaying in the wind, my heart swells with pride .......

From Scene 3: (spoken to his love interest, Yelena, who has her mind on other things)

ASTROV. I have my own desk there in Ivan's room. When I am absolutely too exhausted to go on I drop everything and rush over here to forget myself in this work for an hour or two. Ivan and Miss Sonia sit rattling at their counting-boards, the cricket chirps, and I sit beside them and paint, feeling warm and peaceful. But I don't permit myself this luxury very often, only once a month.

[Pointing to the picture] Look there! That is a map of our country as it was fifty years ago. The green tints, both dark and light, represent forests. Half the map, as you see, is covered with it. Where the green is striped with red the forests were inhabited by elk and wild goats. Here on this lake, lived great flocks of swans and geese and ducks; as the old men say, there was a power of birds of every kind. Now they have vanished like a cloud. Beside the hamlets and villages, you see, I have dotted down here and there the various settlements, farms, hermit's caves, and water-mills. This country carried a great many cattle and horses, as you can see by the quantity of blue paint. For instance, see how thickly it lies in this part; there were great herds of them here, an average of three horses to every house.

[A pause] Now, look lower down. This is the country as it was twenty-five years ago. Only a third of the map is green now with forests. There are no goats left and no elk. The blue paint is lighter, and so on, and so on.

Now we come to the third part; our country as it appears to-day. We still see spots of green, but not much. The elk, the swans, the black-cock have disappeared. It is, on the whole, the picture of a regular and slow decline which it will evidently only take about ten or fifteen more years to complete. You may perhaps object that it is the march of progress, that the old order must give place to the new, and you might be right if roads had been run through these ruined woods, or if factories and schools had taken their place. The people then would have become better educated and healthier and richer, but as it is, we have nothing of the sort. We have the same swamps and mosquitoes; the same disease and want; the typhoid, the diphtheria, the burning villages. We are confronted by the degradation of our country, brought on by the fierce struggle for existence of the human race. It is the consequence of the ignorance and unconsciousness of starving, shivering, sick humanity that, to save its children, instinctively snatches at everything that can warm it and still its hunger. So it destroys everything it can lay its hands on, without a thought for the morrow. And almost everything has gone, and nothing has been created to take its place.

(translation from http://www.gutenberg.org, photo of Chekhov from Wikipedia)
Posted by Steve Hiltner at Thursday, January 17, 2013