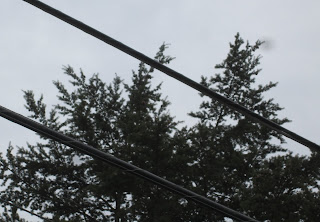 Birds seemed scarce during this long spell of cold weather, but three days ago a flock of small birds was doing a bird's version of Spanish tapas on Linden Lane, converging on the top of a hemlock, feasting, conversing, then quickly moving on to another conifer down the road. There was a contagious, buoyant optimism in their treetop society, their jazzlike mixture of individuality and collective coherence.

It was a small flock--maybe 20 or 30 birds in all--but it's refreshing to see any sort of expression of abundance among what were likely native birds. Abundance is more commonly associated with some human-induced imbalance, like the introduced starlings that suppress native bird populations by competing for food and nesting sites. This small congregation on Linden Lane was a bit of good news cast against winter's gray. 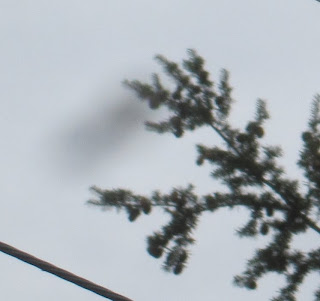 I wanted to know what they were, which proved an inconvenient urge. Knowing more, I might have immediately recognized something defining in their call or body language. Knowing little, I was stuck peering up at their dark, backlit silhouettes, detecting what might be some color in their necks. A photo didn't help. That smudge there is the last bird flying away as I finally got a good angle.

Thinking there might be some particular species most likely to be found gathering high in the hemlocks on a winter's day, I emailed local birder Fred Spar for ideas. He offered many: "... leading possibilities are Juncos, House Finches, or White-throated Sparrows. All are pretty common right now and tend to move in flocks. Male House Finches are reddish-purple on head and neck; Juncos are dark on the head and chest, but with a white belly; White-throated Sparrows have, predictably, white throats, but also very distinctive yellow marks from the eye to the base of the bill. All would make some cheeping/chattering sounds as they communicate with each other while feeding. Junco calls tend to be much higher pitched. Goldfinches or Purple Finches (a bit larger and more rosy colored than the House Finches) are also possibilities, but are not as plentiful as the others. Cedar Waxwings have been pretty scarce this winter, but can usually be identified by very high-pitched lisping sounds. They'd probably also be seen higher up in trees with berries. Could be some more exotic finches or sparrows: There have been Red and White-winged Crossbills in NJ this winter. These are small finch-sized birds with a lot of pink coloring. Maybe Redpolls? These are small birds with a distinctive reddish cap. Pine Siskins are a possibility, too, but they've been scarce since Sandy."

The next day, more abundance paid a visit: a flock of what looked to be a hundred or so robins in trees across the street, with a woodpecker or two thrown in.

By the end of the day, though, abundance had reverted to stereotype, with hundreds of starlings descending on the backyard, like flecks of pepper from a shaker, seeming to gorge on phantoms in my desolate backyard.
Posted by Steve Hiltner at Sunday, January 06, 2013