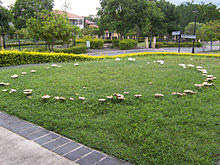 Back in the 1990s, when I was living in Ann Arbor, MI, I would occasionally go to Detroit to play a gig or hear some of the great jazz musicians who live there. On one such occasion, in which Dizzy Gillespie was performing with local musicians in a benefit for Orchestra Hall, I found myself driving down bold, broad Woodward Avenue through what once was a thriving district of Detroit. How strange to see the beautiful Orchestra Hall standing nearly alone in a post-apocalyptic landscape of vacant lots dotted with empty hulks of abandoned brick mansions.

Detroit had been hollowed out as white flight sent those who could afford to out to the suburbs, which in turn sprouted their own suburbs even further out. The steady movement of prosperity outward mimicked the growth of fairy ring mushrooms, which fruit in an ever expanding ring, often leaving dead grass in their wake. (photo from Wikipedia) I imagined those empty lots in inner city Detroit being cleaned up and planted with corn, spurring an agricultural economy that would expand outward as the older suburbs too collapsed in the ever outward push of development into rural areas.

As it turns out, there is a movement of sorts to make this happen. Here's one article, found by searching the internet for "detroit agriculture". Tonight at 7pm, the Princeton Environmental Film Festival will feature the film Detropia, which tells the story of Detroit's past glories and possible future.
Posted by Steve Hiltner at Friday, January 25, 2013