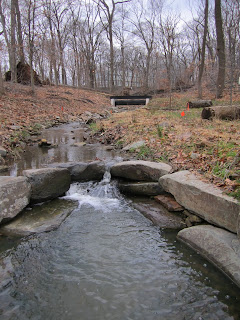 There's a small valley in the middle of Princeton, unseen though thousands pass close by every day. The  stream, its channel badly eroded over time by stormwater from the hardened campus landscape, underwent an elaborate restoration (previous posts here and here),with boulders set in specific configurations to make a series of pools and riffles. 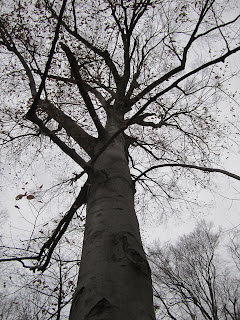 In contrast to most of Princeton's forests, which grew up on agricultural lands abandoned as recently as the 1960s, this valley's beeches, oaks, tupelos and white ash are nearly 200 years old. A few were sacrificed to reconfigure the stream and make room for the big equipment necessary to place the boulders in position, but many remained, 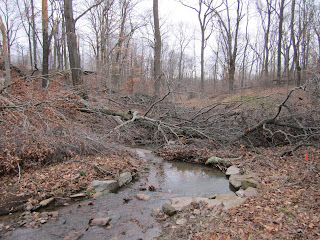 that is, until Hurricane Sandy came along. The nicely crafted stream channel is now clogged with fallen trees. If left uncleared, the trees will divert flow away from the carefully engineered channel. 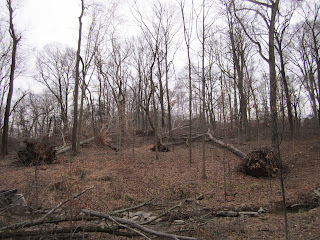 I counted some twenty mature trees down, reminiscent of Pearl Harbor's battleship row after the Japanese bombing in 1941. 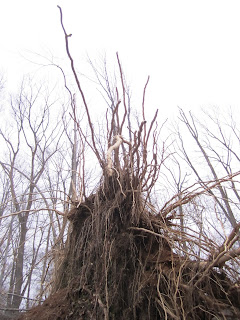 Included in the carnage were some of the giant old trees, their extensive, healthy root systems no match for winds that may well have been 20 mph faster than anything these trees had been exposed to in the past.

One theory I have, which may or may not be valid, is that the winds were not only stronger but also came from a somewhat different angle than our forests have been exposed to before. In this google map photo, the blue meandering line marks the hidden valley (next to Washington Road), and the purple line marks the direction of the hurricane winds, which being from the east had an unhindered path on Carnegie Lake to gain speed before slamming into the valley. It's also possible that the curved roof of Jadwin Gym (the white object above the tip of the purple arrow) served like the airfoil of a plane's wing to increase the wind velocity. 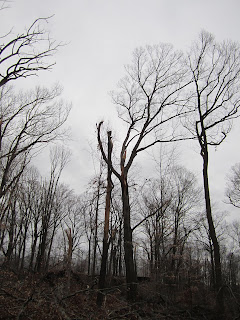 The few gaps in the canopy made by the stream restoration have now expanded, increasing the future exposure for those trees that remain. 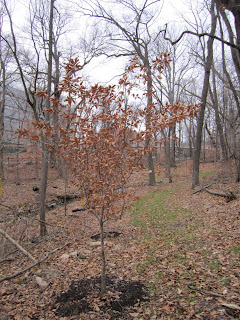 Many young trees--this is a beech tree-were planted as part of the restoration. A more mixed-age forest should take shape over time. The trees will be cut away from the channel, and the hidden valley will still have its beautiful aspects. We can still admire the great trees left standing.

But the loss of so many grand, old, and still very healthy trees may be a local example of what is happening worldwide, as the radicalization of weather exposes forests to conditions they have not had time to adapt to. Seldom mentioned in discussions of changing climate is the extraordinary speed with which the human-caused changes are occurring. What might have happened over tens of thousands of years is now coming to pass in a century. In what has been lost here, it's hard not to see a warning. The more we cling to the status quo, the more the world around us will change.