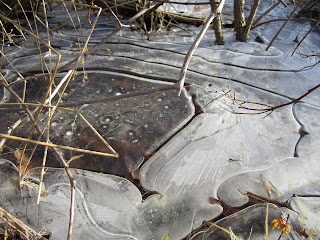 A backyard minipond, essentially a dugout area strategically located to catch runoff from the house or neighbors' yards, serves multiple functions. There's the hydrologic aspect, in that it contributes a tiny bit to controlling runoff in the community. It's greater gifts, though, come in many forms. This pond has attracted an occasional great blue heron and even one time a wood duck, along with robins wanting a bath, and a wayward turtle or frog now and then. Compared to the static nature of the rest of the landscaping, a minipond is particularly dynamic in winter, when it may be open water one day, then frozen into beautiful patterns the next. 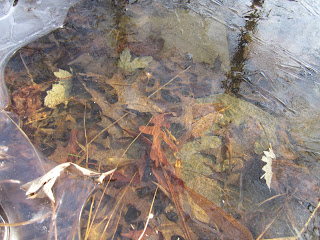 Even in a pond just a few feet deep, the experience of peering down into clear waters can evoke a sense of mystery, complexity and depth, which may awaken awareness of similar properties in our minds.

The other day, when the pond ice was an inch thick, my neighbor came over with his two young boys. While we talked, the boys did what boys love to do, which is break the ice, pull the chunks out, drop them on the ground and watch how they broke into pieces. What other material do they encounter that they can break without consequence? As they explored the pond, they tested the ice's strength, assessing the consequences of putting their weight on it. Without even realizing, they were exploring the nature of risk in a place where they could do so safely. They ended up with wet feet, but home was just one door away.

Later, like shaking an etch-a-sketch, a thaw melted the broken ice, leaving a clean slate for the next cold spell to work its frozen magic.

These are some of the beauties of a backyard minipond.

(Note: Beginning in April, I'll be teaching a mini-course on miniponds and other ways of utilizing runoff in the landscape, at the Princeton Adult School.)
Posted by Steve Hiltner at Friday, January 04, 2013