Death of a Stream 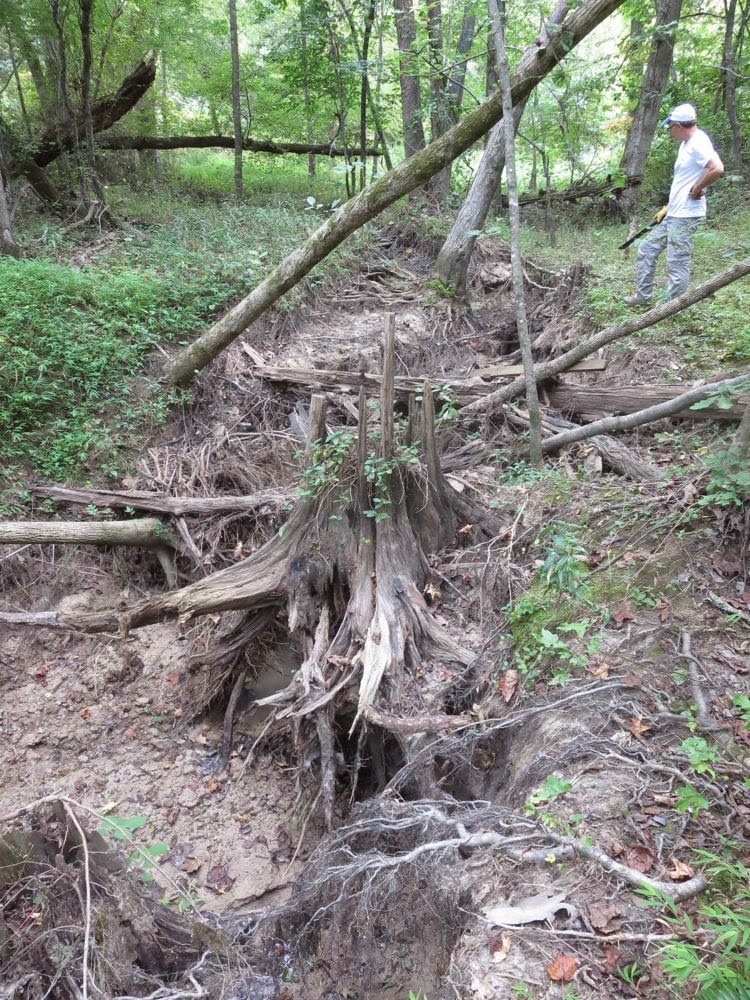 During my visit to North Carolina last month, my friend Perry took me to see how erosion can destroy a creek. Just last year, there had been a healthy, shallow, narrow creek meandering through this section of a wooded valley. What we found on this visit was a ditch eight feet deep. Trees had fallen as erosion undermined their roots, the ground pulled out from under them. This land is protected--preserved for all time--and yet the stream appears to be self-destructing within the boundaries of this nature preserve. 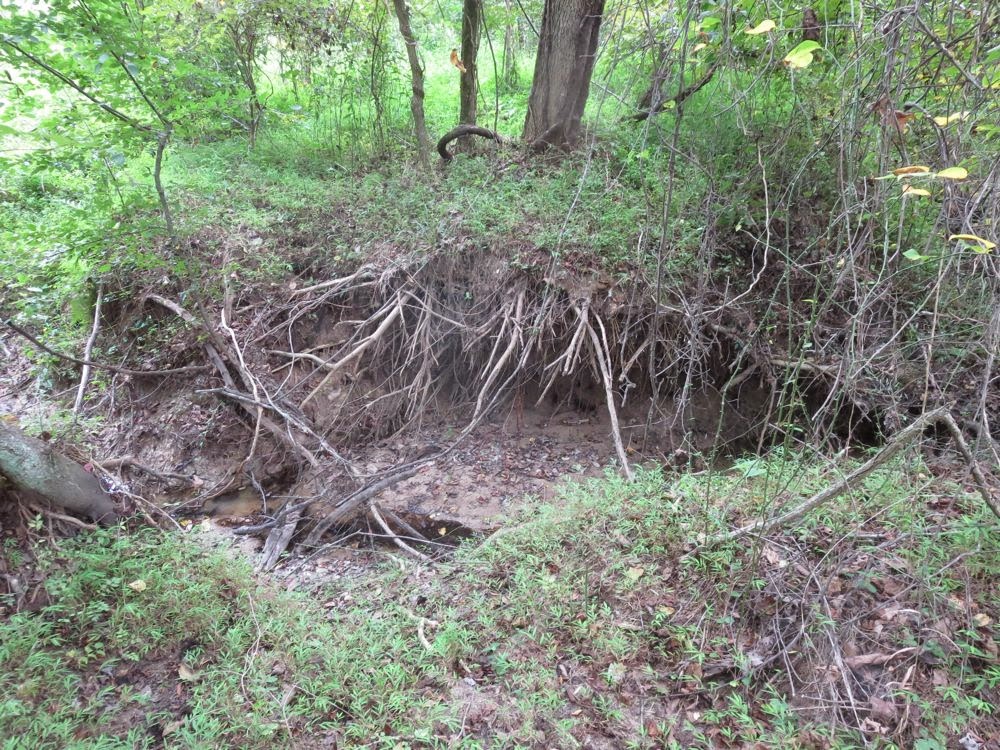 How this happens is completely counterintuitive. There's no rogue backhoe tearing at the tree roots, no misguided government policy like the channelizations of streams that happened in the 1960s. Though we usually think of erosion as being a process that degrades a stream from the top downward, this demolition starts downstream and heads up. Furthermore, the valley upstream of this section is undeveloped beyond a few scattered homes. 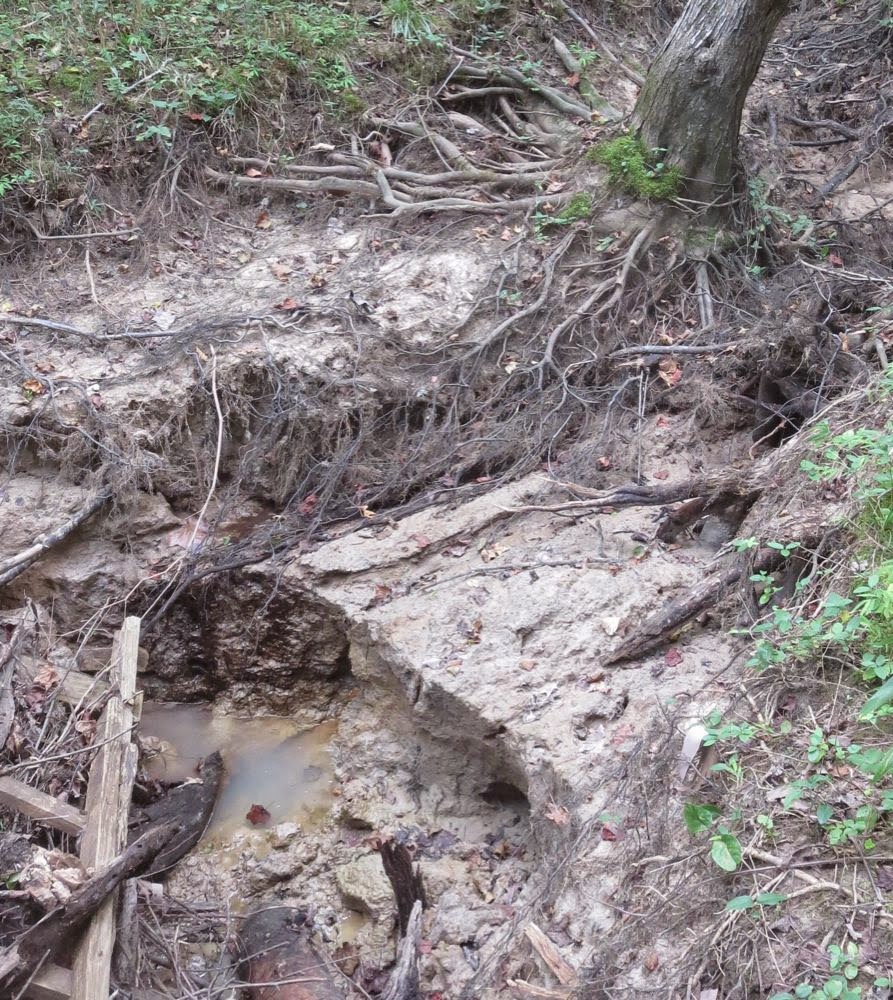 The process at work can be seen in the lower left of this photo, where there appears to be a ledge, a sudden dropoff in the mud. That's what's called a "head cut". As water flows over that ledge, it erodes the face of the dropoff, causing the ledge to gradually shift upstream. The same process is at work on a much grander scale at Niagara Falls, which is slowly but steadily moving upstream from where it was millenia ago. It's like the streambed were a loaf of bread that someone has been cutting slices off of, slice after slice, heading upstream. 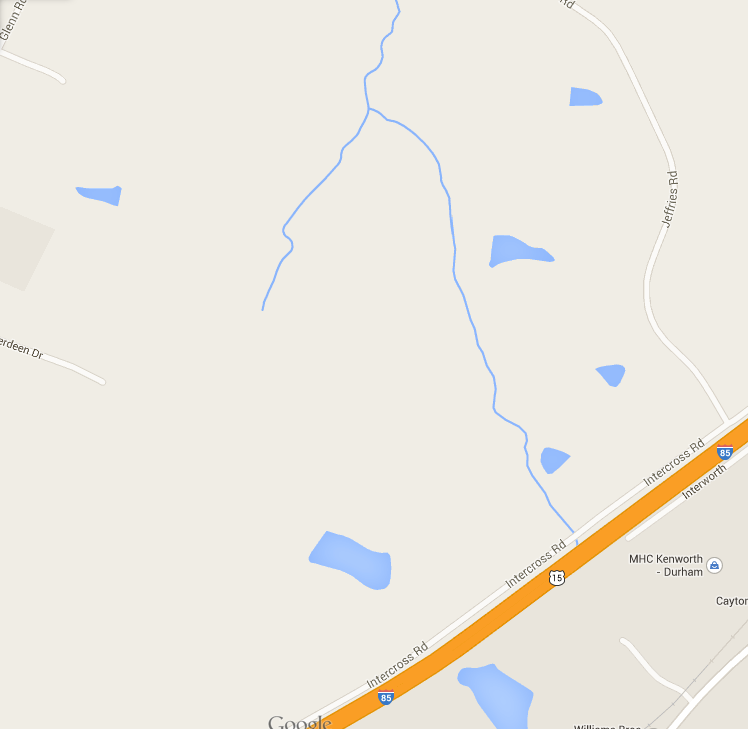 How did this process of destruction get started? On the map, there are two branches of a stream that flows northward (bottom to top on the map). At the lower right is I-85. Tens of thousands of people drive peacefully by every day, their ride made smooth and safe by that broad ribbon of carefully engineered concrete. Not one of them is aware that the road, a ribbon of impervious surface, sheds copious amounts of stormwater, which then barrels down the creek, creating enormous erosive pressure. Somewhere miles downstream, the bottom of the creek gives way. A headcut begins, which then "travels" upstream, back towards the source of the eroding stormwater, consuming and deepening the creekbed as it goes.

Though the little branch of the creek on the left of the map, the one we visited, isn't downstream of the freeway, the erosion of the main branch created a headcut that then headed up the smaller branch as well. 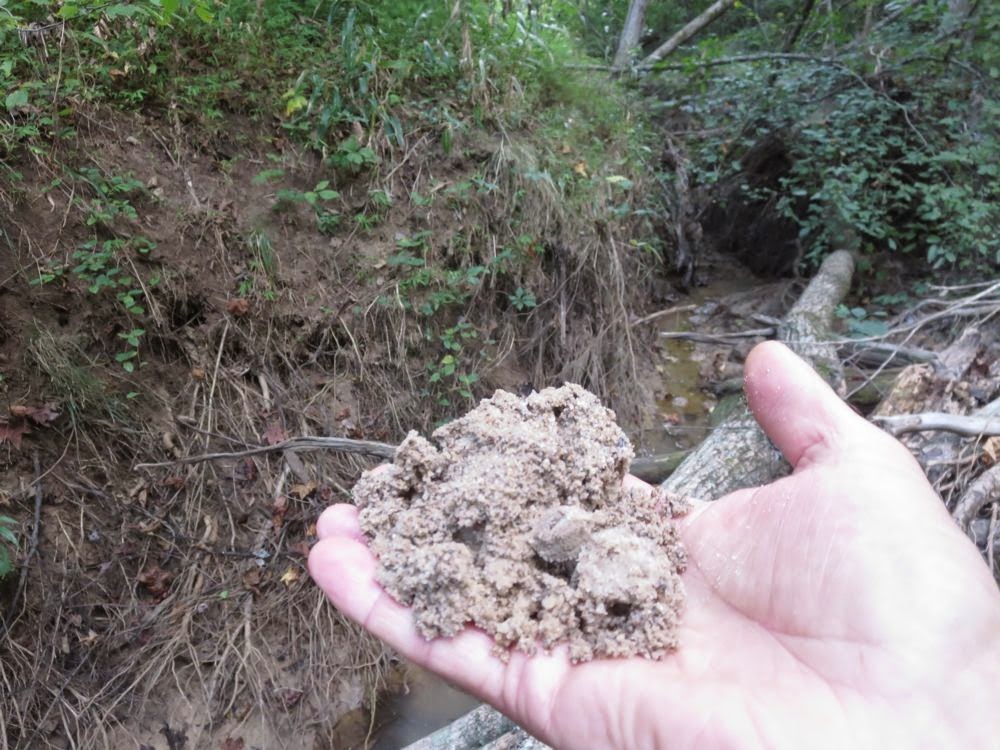 We looked at the soil. It was sandy rather than piedmont clay. At this point, Perry pointed out that the headcut was moving upstream so fast--we estimated 200 feet of creek consumed by erosion in the past year alone--because the soil it was cutting through had not been there a few hundred years ago. During the heyday of tobacco farming, the soil that washed off the fields accumulated in the valleys. The stream is actually cutting down through layers of silt deposited during the agricultural era.

This might suggest that the erosion is actually helping the creek return to its historical level, but the result will not be restoration. Even though the creek may end up down near its original level, the valley's vegetation is still perched high on all the silt. The creek has become disconnected from its floodplain. The water table in the valley drops to match the level of the creek, which makes the vegetation more susceptible to drought.

A healthy creek floods easily and often, in the process dissipating energy and watering the surrounding floodplain vegetation. A deeply incised creek floods rarely, so that all that weight and power of water puts erosive pressure on the creek banks, detaching the stream even further from its natural interaction with the floodplain. Aquatic life has a hard time of it when its home is being either eroded away or buried in silt.

Christmas ferns and witchhazel will still grow on the slopes of the valley. But the valley is changed. The headcut has reached a spot where a beaver dam had created a wetland. Chances are, the headcut will undermine the dam and drain the wetland. Yet another example in our world of how cause--the building of an interstate a half century prior--can be so distant in time and space from ultimate effect.
Posted by Steve Hiltner at Friday, October 10, 2014