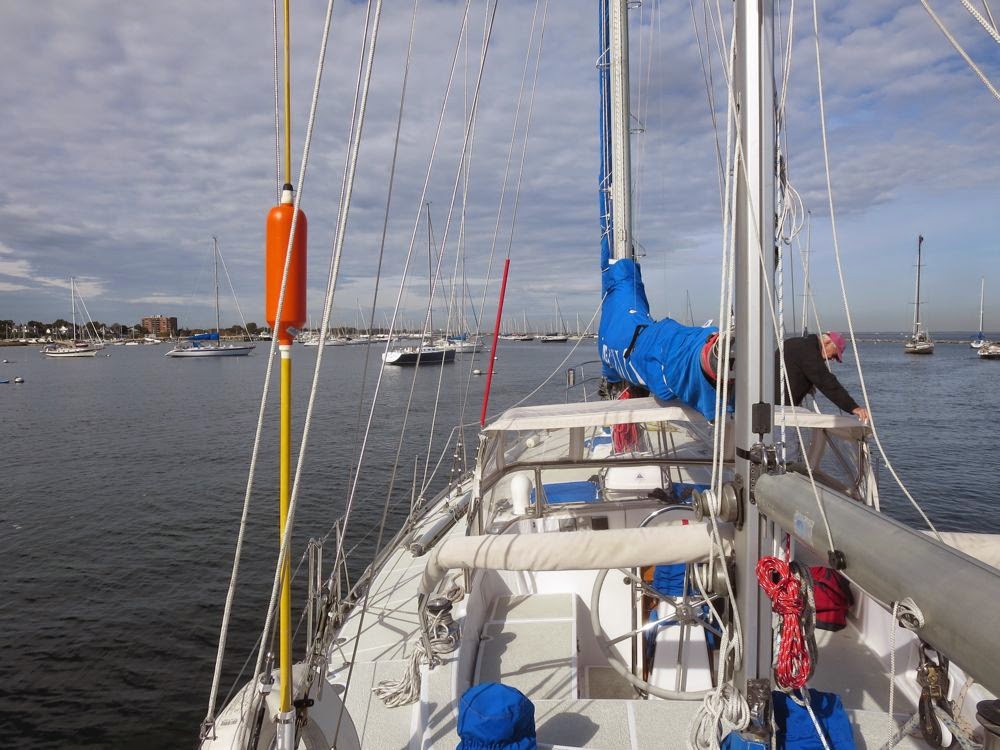 Sailing is a lot like gardening in that it teaches one to work with nature rather than against it. Yesterday, I helped a friend get his most-amazing sailboat ready for the winter. I say most-amazing because I had not before been on a sailboat that's been around the world three times. My previous notion of a great sailing adventure came from camp counseling days when I took some high school kids from Camp Innisfree, near Sleeping Bear Sand Dunes, out to Lake Michigan's South Manitou Island in a daysailer. 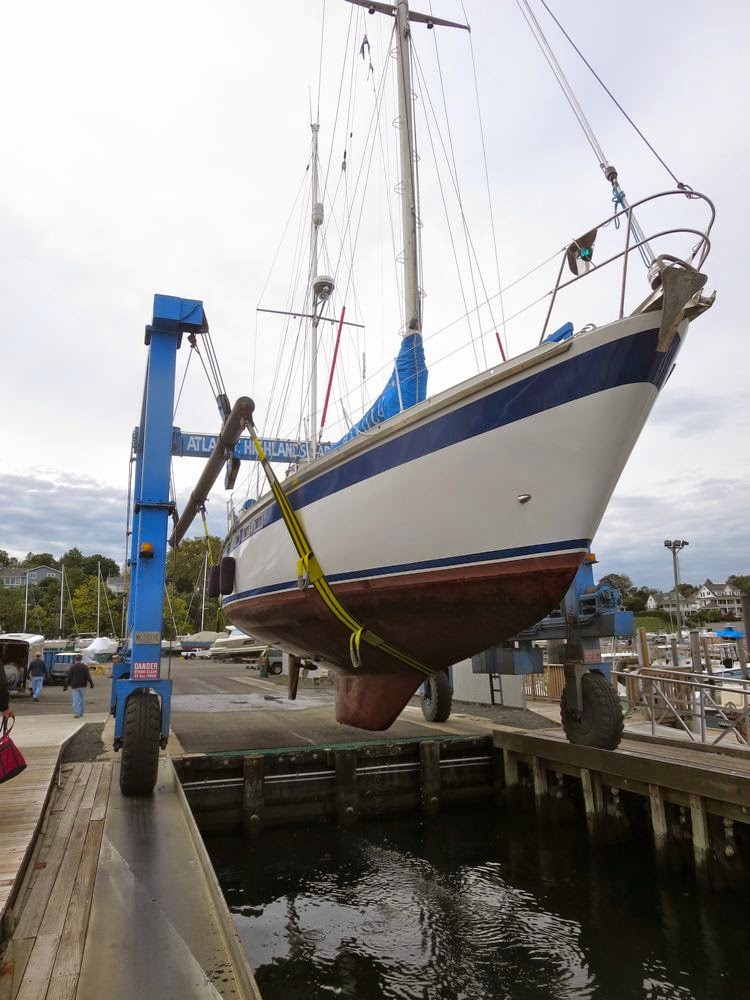 This boat, called Makulu, which in an African language means "big happy Momma", is equipped to nurture far greater ambitions. 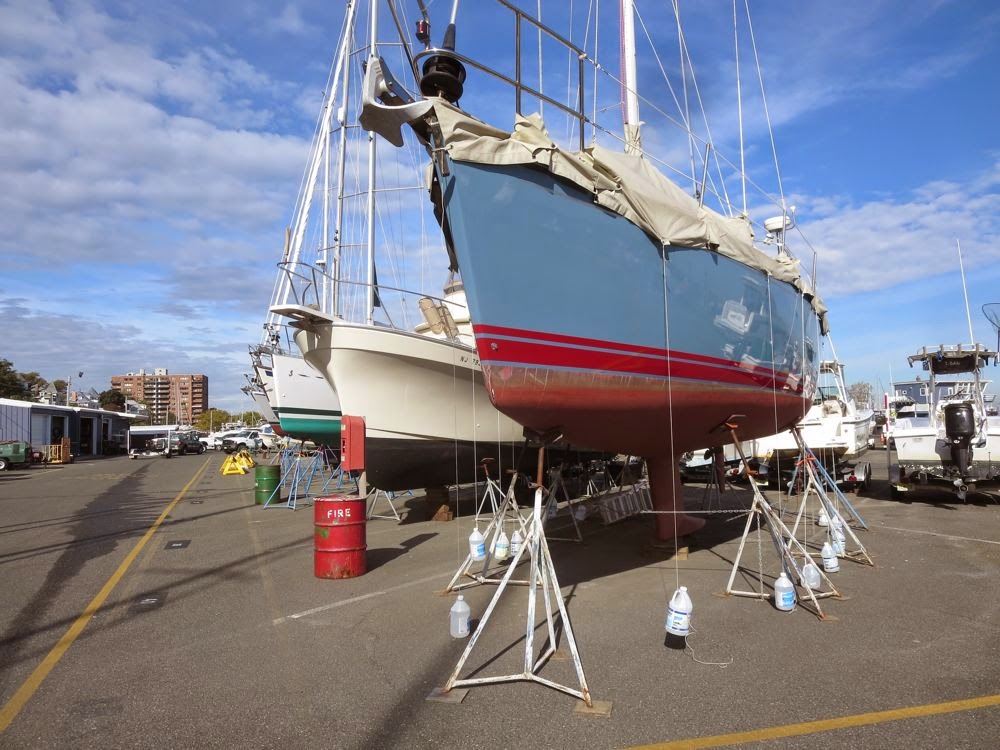 For the time being, though, it will spend the winter with all the others, parked on stilts.

Among the emotional struts keeping my love of sailing well supported and ready to launch at any moment through all these non-sailing years is surely that feeling of acceleration experienced many decades ago when a strong breeze hits the sails. There's the sheer elegance and gracefulness of sailing, the economy of well-trimmed sails, the great good luck--a sort of alchemy--of being propelled forward with no effort beyond keeping a good grip on the rope and tweaking the rudder. Sailing permanently associates the elements of sustainability--renewable energy, efficiency, reuse--with pleasure. Experiencing how something invisible can power travel is also good training for understanding how carbon dioxide could be so transformative. 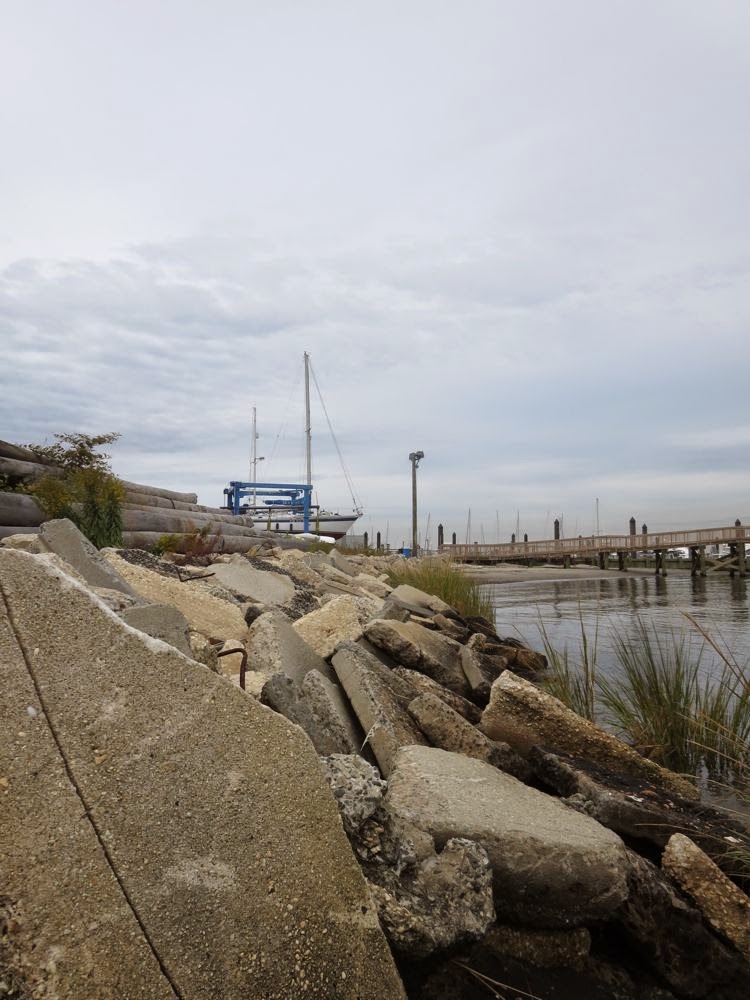 While big happy Momma was getting a good powerwashing to knock off the accumulated barnacles and algae, I decided to do some seaside botanizing. A jumble of concrete may not look like the most promising spot to explore, but it yielded some beauty and meaning. 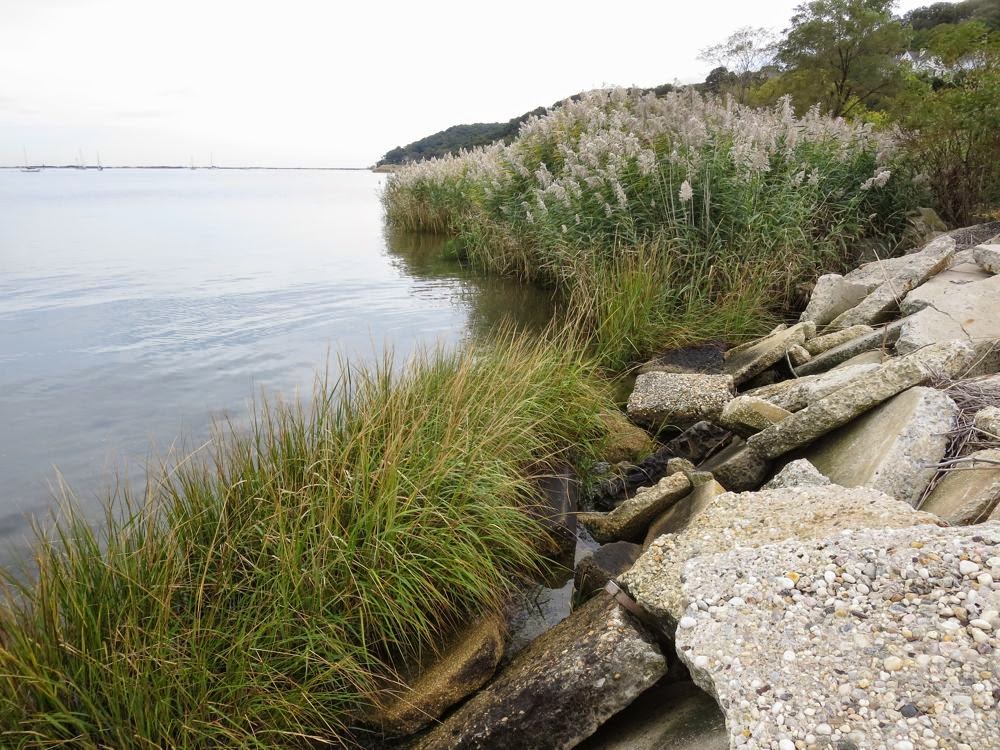 First seen was an encounter between two grasses. The smaller one I'll say is smooth cordgrass (Spartina alterniflora), with the proviso that my coastal botany chops haven't been refreshed since the days of reading Rachel Carson's descriptions of two species of Spartina in the salt marshes decades back. In the background, taller and with pompoms for seedheads, is Phragmitis. It's a pretty picture, but there's drama beneath the tranquility. 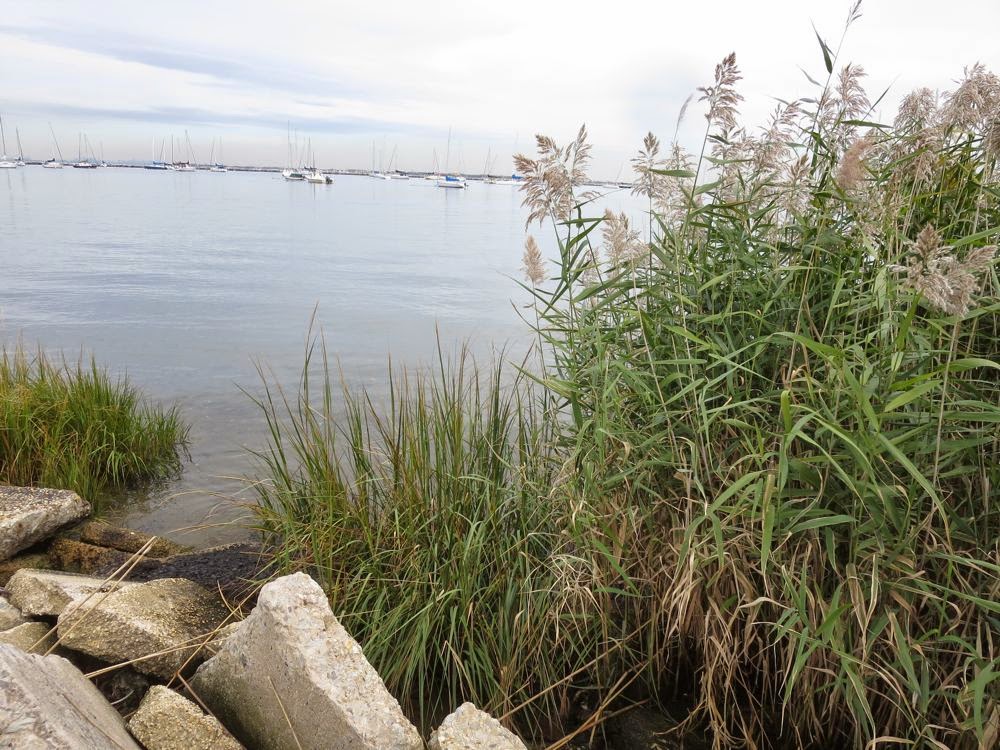 Phragmitis is both beautiful and a botanical bully. In a freshwater wetland, it is the uber-invasive exotic, able to overwhelm even the aggressive native cattail. Here, the peaceful scene shows nothing of the underground battle being waged, as the Phragmitis' rhizomes invade the cordgrass' territory, ready to outcompete, overshadow, and ultimately displace. Meanwhile, the smooth cordgrass, loved as an integral part of the coastal ecosystems of the eastern seaboard, is proving detrimental and bully-like where it has been introduced into the differently evolved marshes of the west coast. As they say in real estate: location, location. 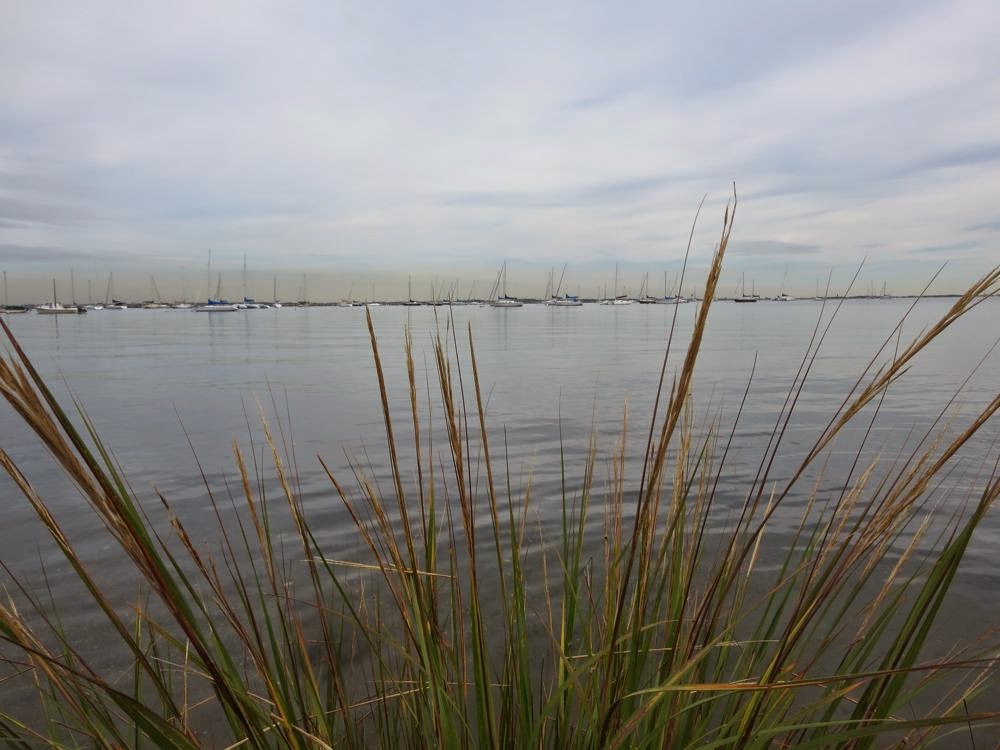 Here, the cordgrass plays off the sailboat masts in the distance. 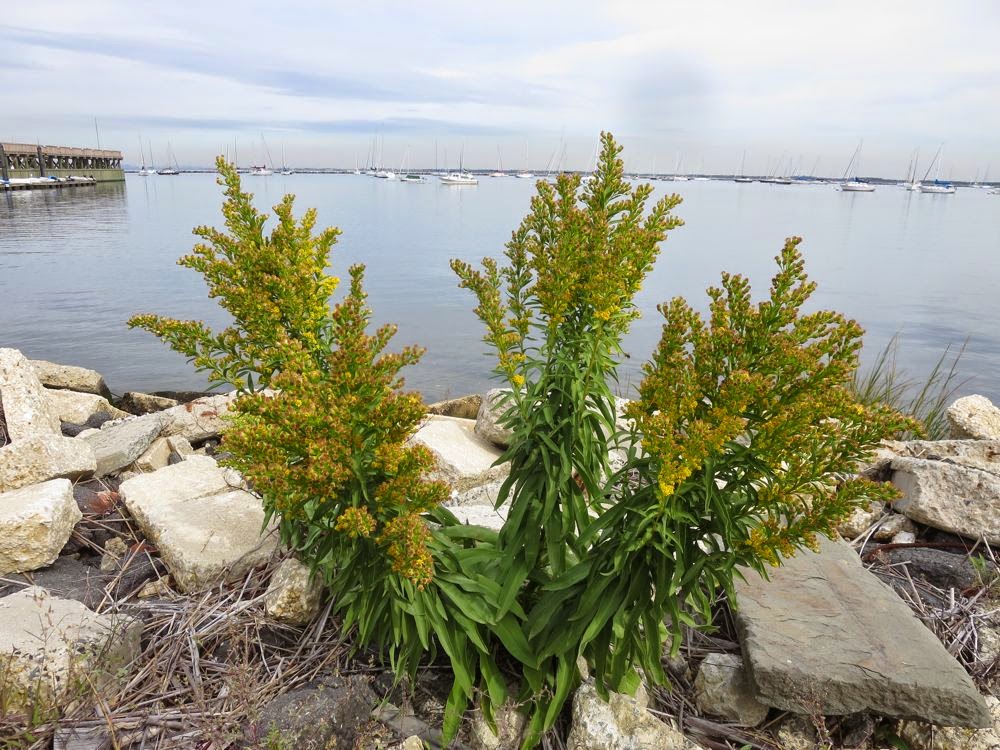 One tough beauty blooming in the rubble is Seaside Goldenrod, Solidago sempervirens. 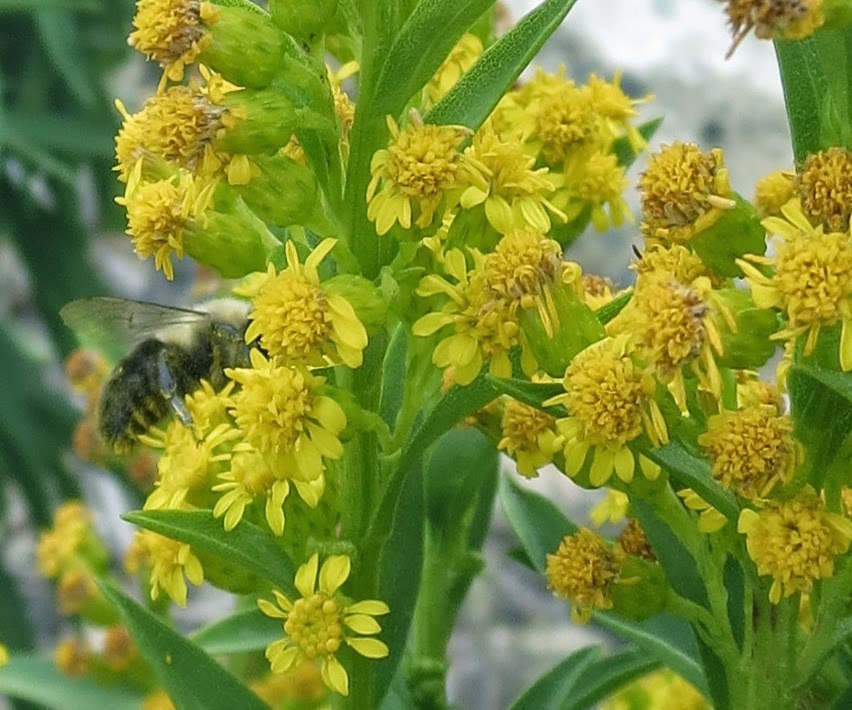 (Time out here to take a swipe at that most durable of botanical falsehoods, which thrives even in the minds of many nature lovers--that being the stubborn belief that goldenrod is allergenic. No. Ragweed, an unassuming wind-pollinated plant that blooms at the same time, is the one that produces the symptoms people falsely associate with goldenrod. How that falsehood has been able to thrive without periodic smear campaigns should be a topic of political science research.) 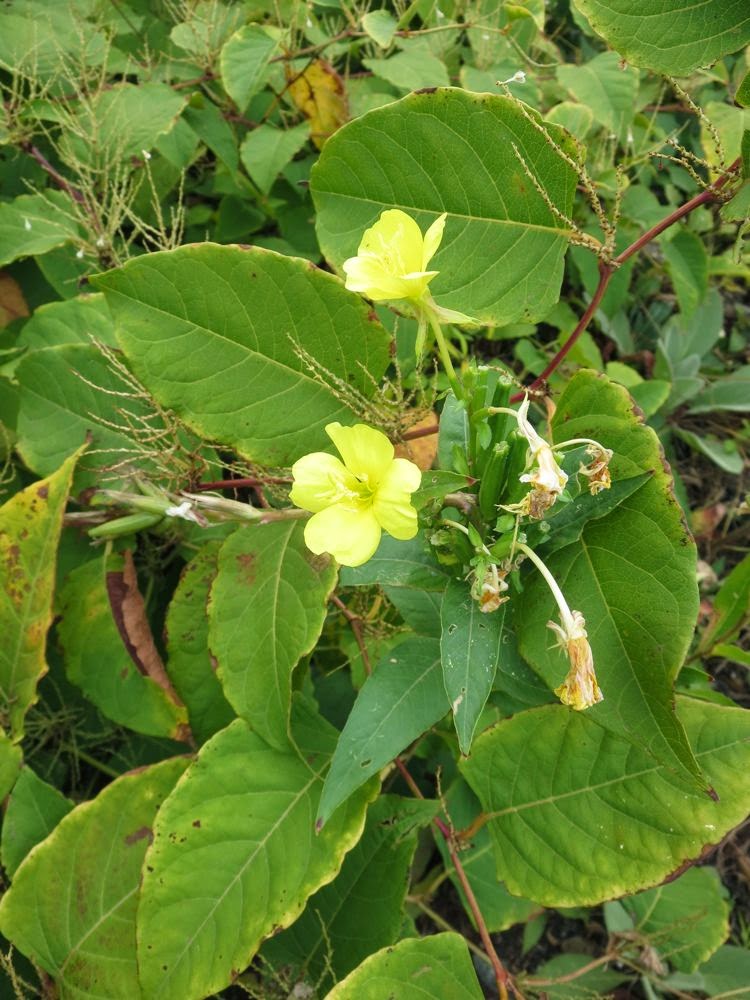 Here's an evening primrose growing up through Japanese knotweed. 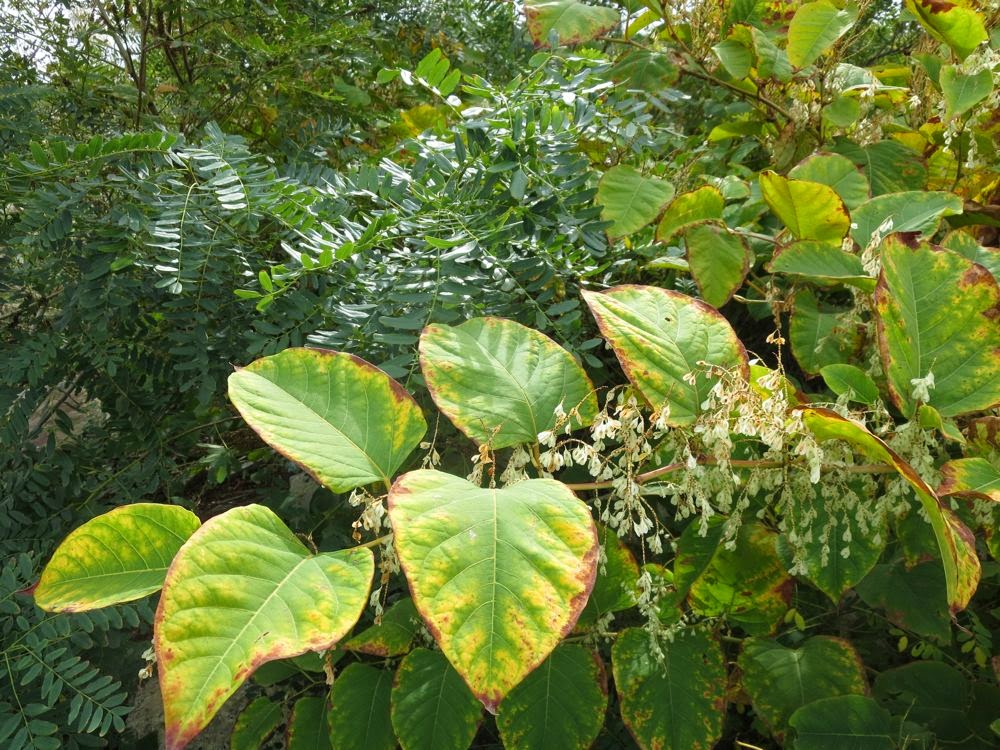 The knotweed, whose invasive tendencies seem muted by the salty environment, grows next to a big clump of native indigo bush (Amorpha fruticosa), a legume whose acacia-like, bluegreen foliage can provide an appealing contrast in a backyard garden. 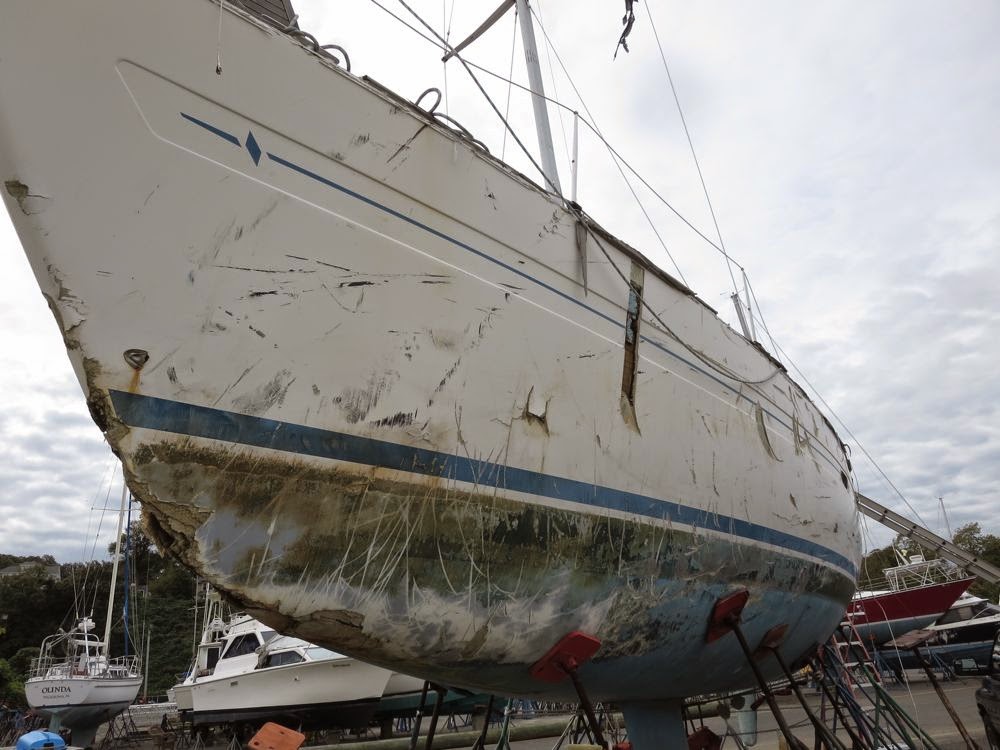 All this mixed talk of beauty and invasiveness is really about balance, which sailing teaches as well. Give us wind, but not too much or too little. Nearly two years ago, this sailboat and all the others at this marina got a big gulp of too much wind, when Hurricane Sandy rolled in, piled boats as if they were toys, and sank this sailboat in the harbor. To salvage the mast if nothing else, it was deemed worth pulling up out of the muck.

The plants, I'm sure, dusted themselves off and went back about their business of growing.