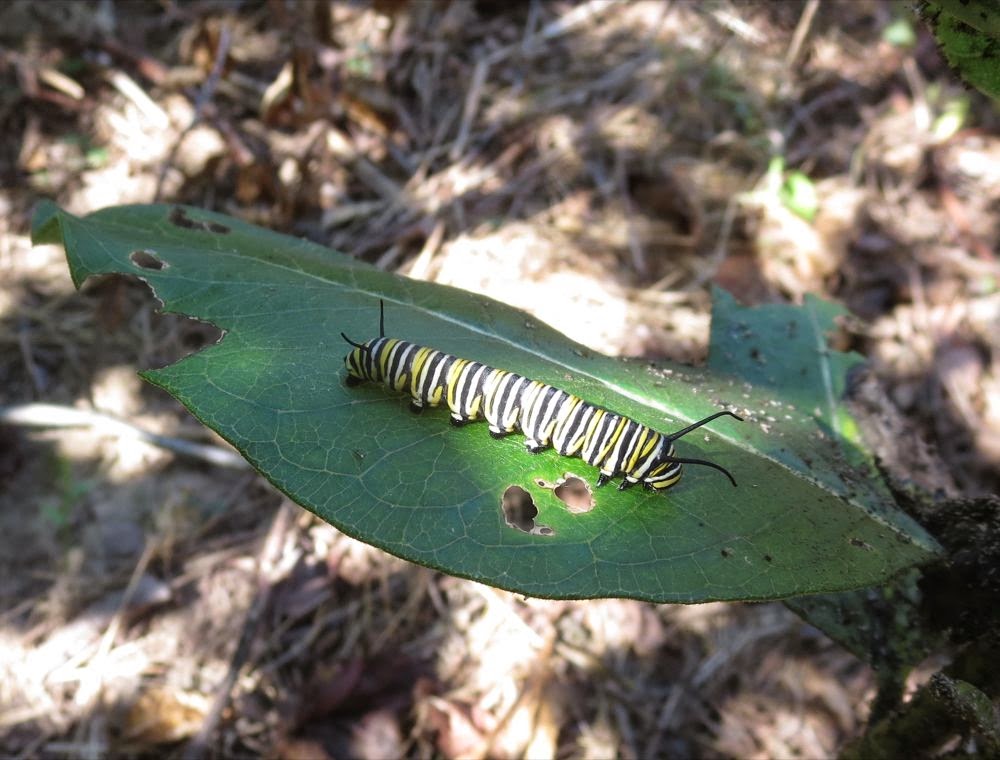 You can track the monarchs' fall migration with weekly updates at this link. It's heartening to hear the numbers are up from last year's record low, but they still have a long way to go to rebuild the population. The migration is not a steady slog from the northern U.S. and Canada to their winter home west of Mexico City, but instead comes in fits and starts. When the winds are from the north, monarchs can travel more than 100 miles/day. When winds come from the south, the monarchs hang low, feed on whatever flowers present themselves, and wait for favorable winds. To a considerable extent, they hitchhike to Mexico on the wind.

Though I saw only a couple monarch caterpillars all summer--this one was on a stray common milkweed growing at our town tree nursery at Smoyer Park--there was a memorable moment in the backyard garden when a monarch flew in its powerful but phantomlike way in a broad circle around me several times.

Along with monarch migration updates, the learner.org site also describes the fall migration of dragonflies, which in at least one instance kestrels are known to accompany. The kestrels chow down on the dragonflies as both species head south. In other words, the food kestrels need travels with them, which is more than one can say for airline travel these days, and of course the kestrels are using a sustainable energy source to get around.

Now that I'm not spending time in parks pushing my kids on the swings, I'm missing the annual dragonfly festivals, in which a layer cake food chain spontaneously appears above the playground. Winged insects emerge from an underground nest, disperse above the lawn, get feasted on by dragonflies that in one case attracted swallows wishing to snack on the dragonflies. It's a rare show of nature's abundance--the sort that Rachel Carson describes in Fable for Tomorrow, the three page first chapter of Silent Spring.

A National Geographic post describes the similarities dragonfly migrations have with those of birds.