Many people have asked me for an update on the raingarden that was bulldozed at Spruce Circle on Harrison Street this past August. The loss of the raingarden, planted on Housing Authority land next to Harrison Street, came as a shock, given I'd been taking care of it for six years. The story gained considerable additional attention when my post was published on the local news site, PlanetPrinceton.com. Since the Housing Authority's apology a week later, I have been working with Housing staff and others to develop a plan not only for replanting of the original raingarden, but assessment of other locations where raingardens could be planted as well.

The aim of these plantings goes beyond aesthetics. The importance of pollinators for food security is more in the news lately, as is the uncertain fate of the monarch butterfly's miraculous migration. All of this is getting people to look at landscapes with the needs of pollinators in mind. 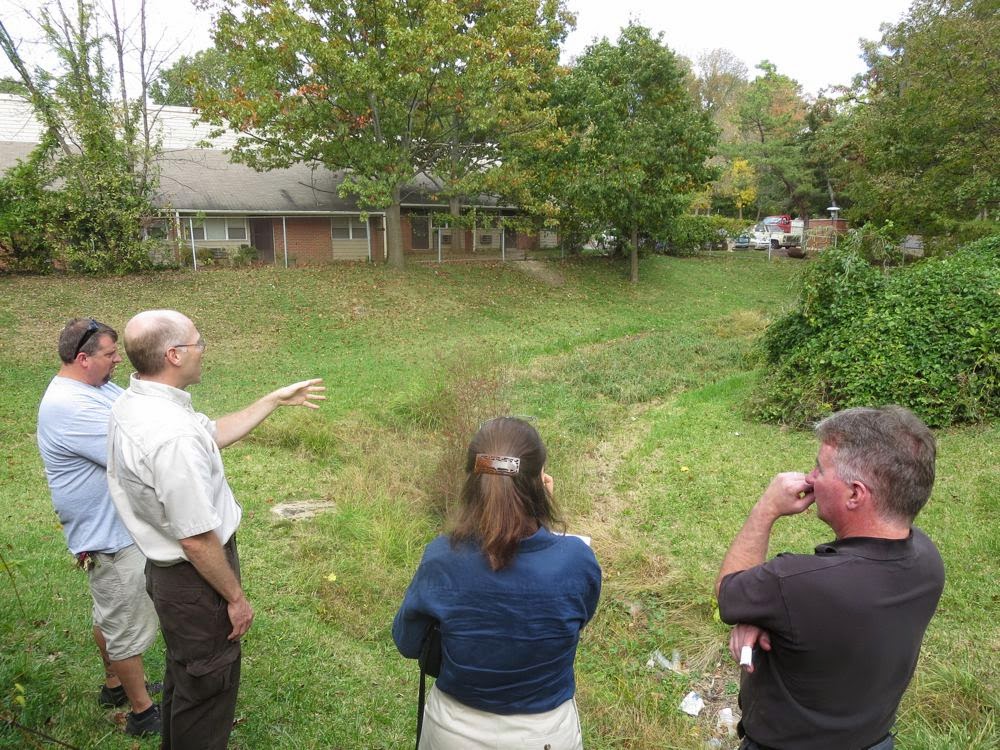 That's what we were doing at Redding Circle last week, in a detention basin at the corner of Ewing Street and Mount Lucas, hidden behind a fence, where the runoff from a Housing Authority complex accumulates before being piped into Harry's Brook. "We" was Housing facilities staffer Jim, Brian Marsh of Partners for Fish and Wildlife, Heidi Fictenbaum of the Princeton Environmental Commission, and Greg O'Neil of Princeton public works. Heidi, in an initiative parallel to my own, has developed an inventory of Princeton's many detention basins, with the aim of retrofitting as many as possible for habitat.

The question being pondered was how to turn a detention basin filled with exotic fescue, stiltgrass, and invasive porcelainberry vines into a foodfest for pollinators, while actually reducing the maintenance Jim and his staff need to do. 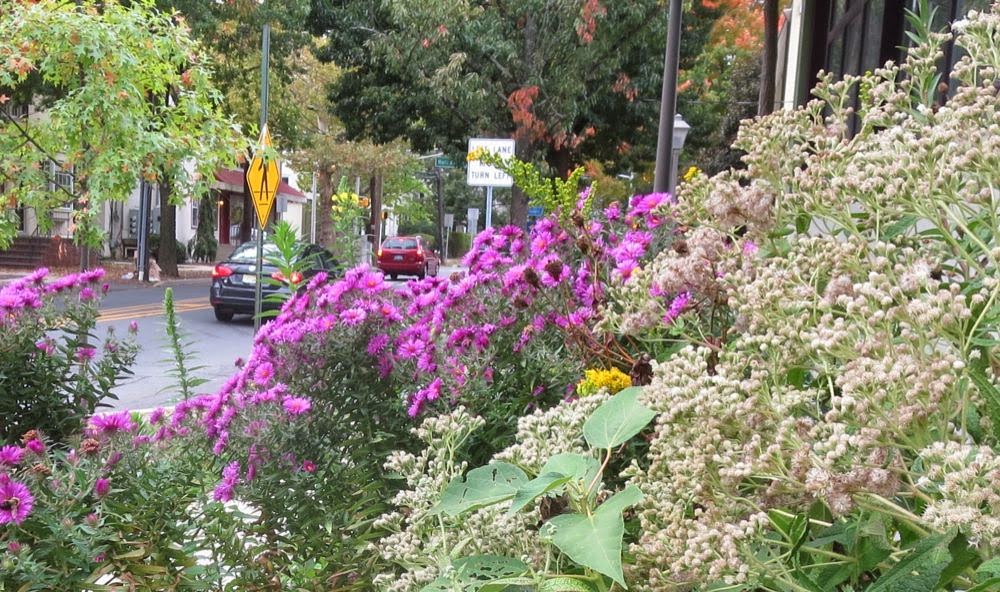 When standing in a rather drab detention basin talking for 45 minutes, it helps to be all the while visualizing a field full of New England Aster and late boneset, like these that are prospering along Nassau Street in front of the Whole Earth Center. The magic of raingardens and their larger cousins, detention basins, is that the soil is more frequently wet. That wetness means easier planting and weeding in the soft soils, less followup watering, and increased chance that the native species so well adapted to growing in wet, sunny ground will thrive.

We came up with a plan, jotted down and sent around by Heidi: Reduce mowing to once every year or two, knock out the porcelainberry vines, plant native wildflowers in the wettest, lowest part of the basin, and close the gate so the deer have a harder time getting in. 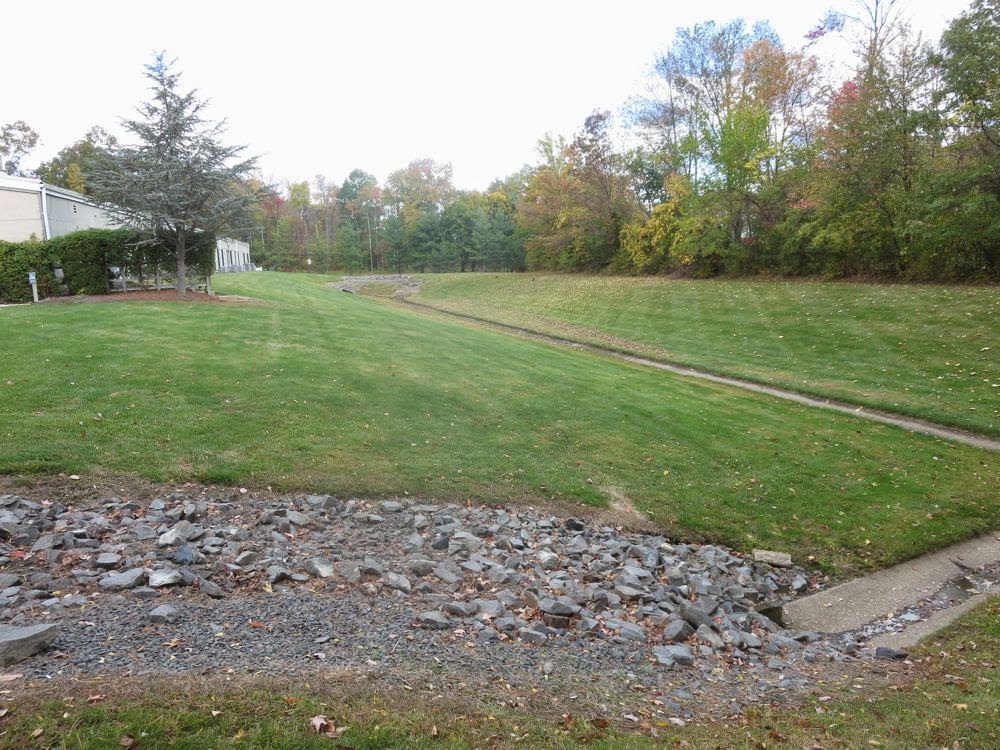 I then took Brian--whose federal Partners agency has helped with basin conversions in the past--at the Princeton High School and at Farmview Fields--on a whirlwind "great basins of Princeton" tour, to see if we could turn additional basins into aesthetic feeding stations to support pollinators. The massive one in this photo is just up from the Charter School. Again, it helps, when looking at this mass of undifferentiated turf with its existential "sidewalk to nowhere" running down the middle, to imagine schoolkids helping to plant shrubs and wildflowers, and returning the next year to learn about the sorts of pollinators that make their lunch possible. 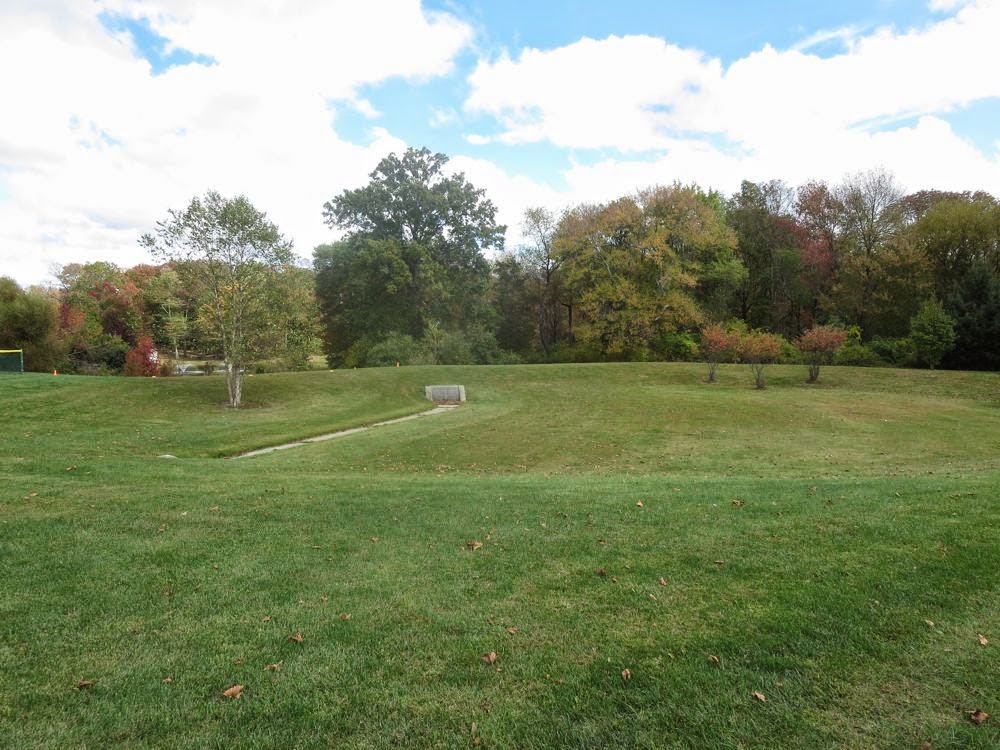 Next stop was Smoyer Park, which has a promising basin that receives runoff from the parking lot. A meadow would provide better filtration of the runoff than a mowed lawn. We also visited a basin out Rosedale Road at Greenway Meadows.

Unfortunately, Partners for Fish and Wildlife, like most federal agencies, have been hampered by Congress' sequestering of funding, so may not be able to help out as much as in the past. Still, there's a chance they can do enough to kickstart this local initiative. Meanwhile, back at the Spruce Circle location, replanting of the bulldozed raingarden could include replacement of these winged euonymus shrubs, which are constantly overgrowing their location and have made for a jarring visual behind the rain garden. To be planted in their place, if the plan is approved, would be something similar to this--a mix of Virginia sweetspire, Fothergilla, highbush blueberry and oak-leaved hydrangia.

The moral of this story, still early in the telling, is to turn lemons into lemonade. Or, for those who think like a pollinator: turn turf into nectar.