One big problem the Princeton Shade Tree Commission is grappling with (I'm a member), is that Princeton is losing about 250 street trees per year--to disease, storm damage, old age--but only 50-100 trees are being planted per year to replace them. The numbers don't add up, and will be even more mismatched after the Emerald Ash Borer arrives. The low number of trees planted is partly due to the expense of purchasing and planting them. Traditionally, saplings of 2-3" caliper (diameter) are planted, which can mean $250/tree plus the cost of digging a big hole to accommodate the root ball. Trees that size quickly eat up the budget and the amount of staff time available for planting.

Trees along streets and in parking lots provide many benefits. By shading pavement and transpiring, they keep the town cooler in summer. They catch some of the rain and thus reduce runoff; they absorb some pollutants from the air, sequester carbon, soften the lines of urban spaces. So, is there any alternative to the current steady attrition? 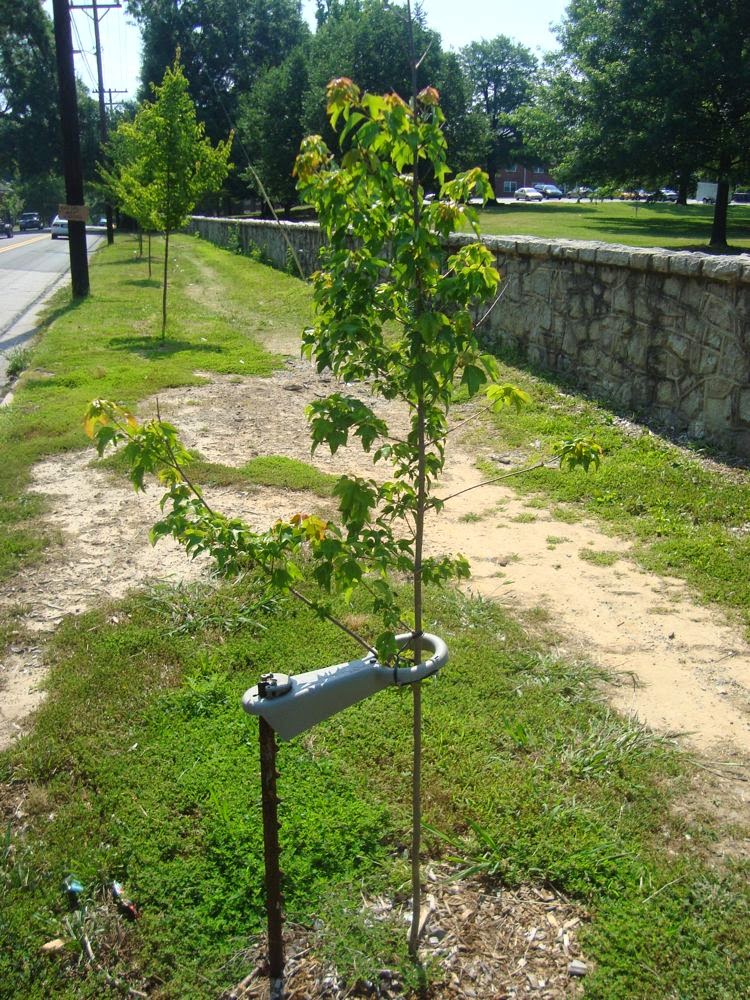 During periodic visits to my old haunts in Durham, NC, I started noticing much smaller trees being planted along streets. This maple's about an inch in diameter, five or six feet high, and is steadied by a simple, reusable stake and ring assembly. If the trees flourish, the advantages are easy to see. Not only is each tree much cheaper, but the hole needed to plant it is much smaller. Small bare-root trees mean less weight to transport, easier handling during planting to insure proper positioning in the hole, and more opportunity for volunteer participation. We have what appears to be a win-win.

A general search of the web yielded no information about the relative benefits of planting younger trees. So I ended up calling Durham's arborist, Alex Johnson, to find out how this approach is doing.

More detailed notes are below, but here's the upshot: Planting 1" caliper, 5-6 feet high, bare-root trees greatly increased the number of trees that could be planted (from 100 to 500), with less followup care, more potential for volunteer participation, and comparable survival rates. In other words, if we want to shade our streets and parking lots with a limited budget, these smaller trees appear to be the way to go.

As with any new idea, this one will have to run the gauntlet of doubt, swim through a sea of skepticism, then jump through a daunting series of logistical hoops--a triathlon that thus far has discouraged any and all rivals from even showing up. These little-trees-that-could might not get much respect when they're first planted, but my observation is that time is good at playing tricks on people, and whether its trees or kids, they grow up before you know it. Among the logistics is finding a nursery that can deliver this size tree, because of the curious route most nursery trees take to market (described below).

Here are more detailed notes from an extended conversation with Alex: 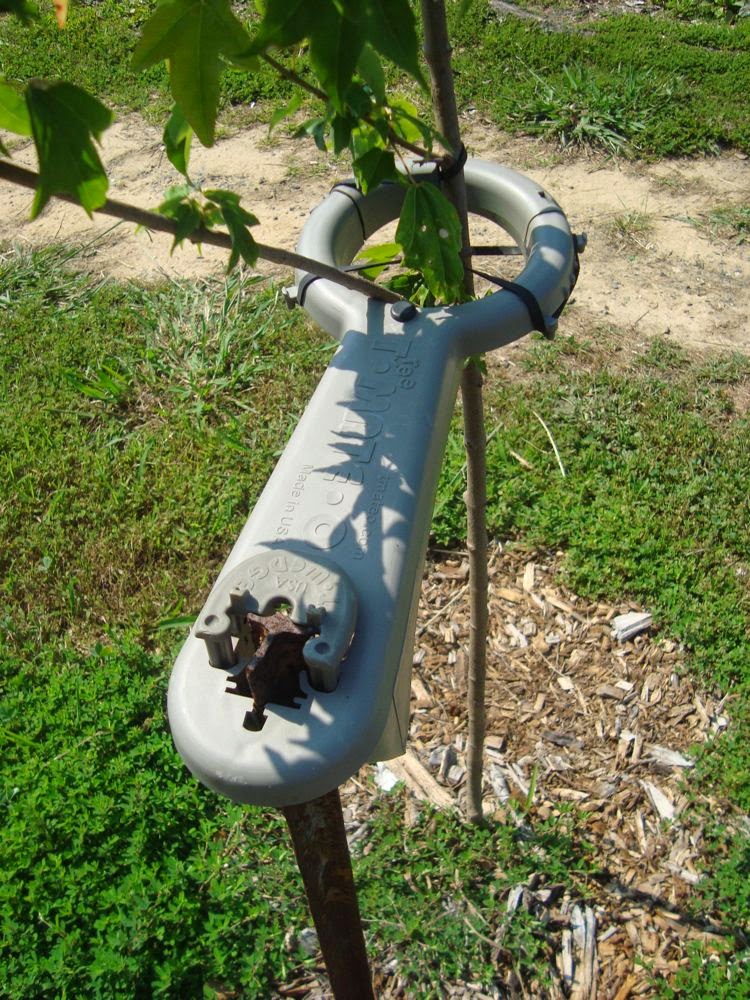 Avoid containerized material. Alex cites the research of Ed Gillman of the U. of Florida in Gainsville. Pots affect root viability. As seedlings are moved from one pot size to another, each time the roots expand, then spiral, so that one ends up with saplings with compromised circulatory systems. Conducting post mortems on trees that have died prematurely can be instructive.

One good option is to go with bare root saplings, which are available from nurseries that provide material for other nurseries. He plants "nursery liners"--trees so named because they have been grown in a line at a nursery. They can be derived from cuttings or grafts. He prefers cuttings, because grafts have compatibility issues. The benefits of using bare root stock are described well at this link.

There's been a tendency to plant oversized trees. A lot of nurseries went under during the recession, due to a consequent drop in housing starts and town budgets, both of which reduce the amount of planting going on. This means nurseries got overstocked with big trees and stopped planting new "liners".

To avoid oversized trees, he's had to go farther afield to find a nursery with the stock he needs--in Tennessee. However, he thinks there are lots of nurseries in our area. He mentioned Shiktel's, up near Cornell, as one of many. A subsequent call to Shiktel's suggests that it is an excellent nursery, but isn't the sort that provides $20 trees. Their minimum size is 1.5", and a hydrogel treatment to better insure survival of the bare roots brings the per tree cost to $75. Shipping is extra. Interestingly, they say that most trees grown in eastern nurseries start their lives out west, e.g. Oregon, where a long growing season allows the trees to make a quick start. The trees then are shipped east, go through a shorter growing season that makes them less leggy, after which they are ready to sell. Shipping of bare root trees from Shiktel's is either the first two weeks of November or the last two weeks of April. Finding a $20 tree will require finding one of those "nurseries that provide material for other nurseries".

An alternative to bare root is bagged and burlapped trees. Volunteers can plant B and B's up to 2 inch caliper. A 1 inch caliper B and B could cost as little as $40.

Regulations
There may be regulations that require a minimum caliper size for planting, but these should be relevant to new developments rather than replacements in existing areas.

Promotions to Increase Volunteer Participation
For volunteers, he goes to neighborhood associations. For 2-3 foot trees given to homeowners (not necessarily to be planted near streets), he suggests partnering with local coffee shops so that homeowners get a free coffee if they come in with a selfie of themselves and the planted tree.

For tree forums, he recommended thegrove.americangrove.org. Each state has a group, including New Jersey. There's also the Alliance for Community Trees (ACT), and the Society for Municipal Arborists, which is more technical.