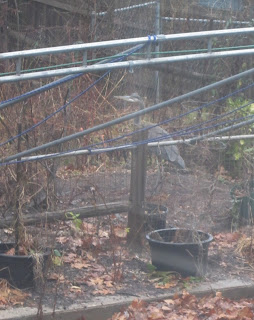 Reality check here. Two days after Christmas. No creatures stirring in the house. Mousetrap empty. Stockings still hung by the chimney with care. Visit from Santa? Check, but how did he get through the wood stove? Children still nestled all snug in their beds? No doubt. It's vacation. Sugar plums dancing in their heads? There always seems to be something dancing in their heads.

But what's this? I by my window, computer before me,

When outside there arose such a flutter,
I sprang from my desk to see what was the mutter.
Away from the window, I flew like a flash.
Searched for my camera amongst all the trash. 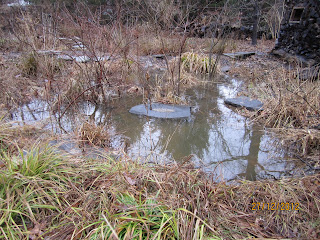 It came at 8am on this grey, overcast morning, drawn by the backyard miniponds swollen by recent rains. For the first minute, the breeze ruffling its neck feathers, it stood still but for its head, shifting angles of sight, perusing the watery scene. Whether its extraordinary state of alertness was devoted to sensing potential danger or potential food, I couldn't say. 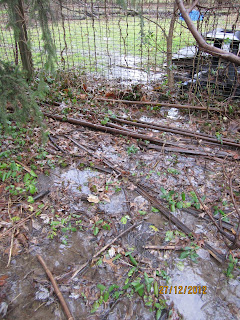 The pond it found so intriguing has its genesis in runoff from neighbors up the slope. When rain continues for days, the soil becomes soaked and our ephemeral tributary of Harry's Brook comes to life, flowing under the fence, 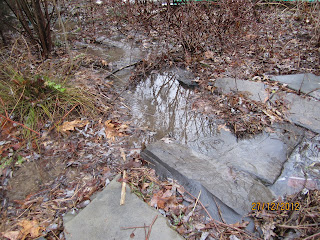 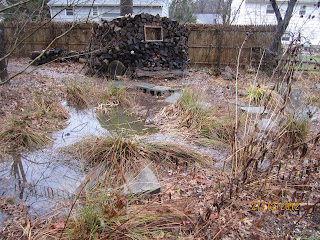 down the reconstructed channel and floodplain planted with native water-loving sedges, rushes, and wildflowers, past a firewood sculpture that keeps an eye on the backyard, and finally under the lower fence, to run the gauntlet between two neighbors' homes built before building was banned in floodplains. 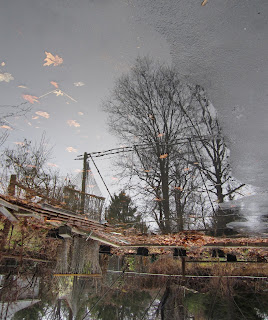 Not finding what it wanted in our ponds, the heron checked out our driveway "retention basin". Note the clouds in the sky that look just like leaves. Actually, oh, sorry, this photo is upside down. 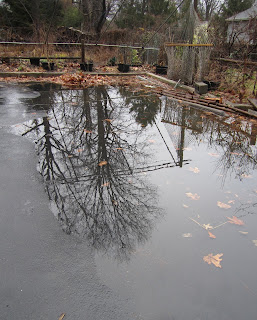 Here we go. That's better. One reason I put little faith in pipes to drain things like driveways is that the pipes tend to get blocked. The one here was clogged or crushed by a tree, which we finally cut down. Routing, excavation--all have been attempted, to no avail. However, perhaps the tree roots are starting to rot away, because the pipe has begun to work again, making the driveway act like a retention basin that catches stormwater runoff, then releases it slowly into the local waterway, which as mentioned happens to coincide with our backyard. 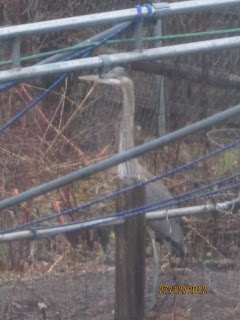 We contribute less to downstream flooding, and we get visits from distinguished guests. Not a bad deal.

I like to think the heron was fooled by our swollen pondlets just like I was as a kid, living for a month on top of a mountain in Texas while my dad was on an observing run at McDonald Observatory. At the base of the mountain was a pond full of catfish that we had much success catching during long evenings before my dad headed up to the telescope, to scrutinize the depths of the universe for the night. That part of Texas was known for its lack of rain, which is why the observatory was there. But one afternoon, a single large cloud appeared on the horizon in an otherwise blue sky. It came right over us, as if on a mission, dumped its thick rain upon us, then left within an hour. I looked down the mountain and saw the pond had tripled in size. Maybe it was all of those Field and Stream magazines I was reading, but to my thinking the swollen pond meant that the fish had tripled in size as well. I was so excited I hiked all the way down the mountain, sugar plummed lunker fish dancing in my head, and cast my line into the sprawling, muddy waters, expecting great things. Not a single fish. Slowly it dawned on me that there still were the same number of fish, and they hadn't grown. They were just more spread out and they couldn't see the bait because of all the muddy runoff. I was, in the true sense of the word, dis-illusioned. But in retrospect it made for a great hike.

Before I could rouse the kids this morning, the heron flew off into the bleak morning sky, to grace some other place, and hopefully return after some future rain, to lend our modest waters its deep scrutiny.
Posted by Steve Hiltner at Thursday, December 27, 2012