My Photo Selected for Traveling Exhibit 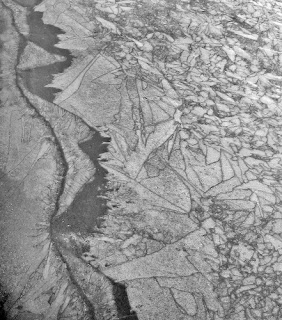 I was very honored recently to hear that the eminent photographer Emmet Gowin chose to include my photograph of Carnegie Lake ice in a traveling exhibit of photographs, selected from the Princeton University's Art of Science collection. Assisting in selection was Joel Smith, former Curator of Photography at the Princeton Art Museum.

Here's the descriptive text from 2010:

"Energy drives water's greatness. No molecule responds more brilliantly than water to the energy regime negotiated by the planet's atmosphere. If there were a physical template that drove the evolution of our imaginations, it would be water. Water is the ultimate artist, a renaissance molecule, exploring endless patterns and textures and playing with light as it shifts nimbly from solid to liquid to gas. Glaciers and rivers are channeled energy, but in a lake, water is trapped, and must do its work within the frame of a shoreline. A steady exodus of energy yields congealed, dark ice. But more often, the process is complex — a series of freezes and thaws, compressions and expansions. One day this past January, crossing the Harrison Street bridge, I happened to look over and noticed that all of Carnegie Lake had taken on the rich patterns of a giant, horizontal stained glass window. This close-up is part of a comparative exploration of the forces driving creativity in people and in nature."

Other photos from that very unusual "frozen moment" in the lake's history are documented in a March 4, 2010 post on this blog. I also had a photo in the 2009 Art of Science exhibit, taken a previous time when Carnegie Lake froze thick enough to skate on. 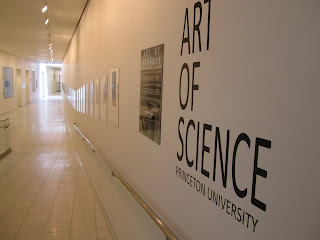 The university's "best of" traveling show (facebook version here) of 45 images, selected from more than 250 images in past Princeton Art of Science exhibits, will continue through March 17, 2013 at the Liberty Science Center (LSC.org), located in Liberty State Park, not far from the Statue of Liberty.

You can see the current Art of Science exhibit on display in the main walkway at the university's Friends Center, or go to princeton.edu/artofscience.