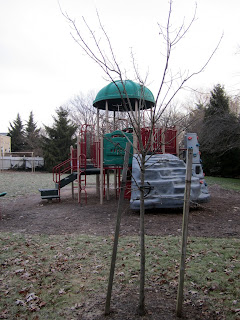 Nothing symbolizes so well the quandary of the future as the question of how to shade play equipment in a park. Back when I was frequenting playgrounds with my kids, in various parts of the country, we'd typically find the play equipment lacked shade and would get searing hot in summer sun. The equipment would be rendered useless for hours, because no one had thought to plant a tree in the right place years before. Oftentimes, trees had been planted elsewhere in a park, but not in strategic locations where their shade would do the most good.

So when a couple wanted to plant a tree in the park behind my house to celebrate the birth of their son a few years ago, I suggested we plant it southwest of the new play structure, so that its limbs would eventually provide shade during the hottest hours of the day. I showed the tree to a town arborist the other day, and he joked that he will have long since retired to Florida by the time the tree is shading the play structure. I offered that he might be saved a trip, given how quickly Florida's weather is migrating northward.

It's not surprising that staff would be less than passionate about a well-shaded future, given a necessary preoccupation with keeping a storm-ravaged town functioning in the present. And when I look at the tree and see how far it has to go, it does seem a leap of faith. How else, though, does one make cool, delicious shade happen other than to make that leap? The future will come sooner than we think. Trees grow--the evidence is all around--and yet playgrounds across the land roast for lack of shade.

There's another kind of play and exercise that parks need to foster--the play of the imagination, leaps of faith--so that we might better see, and shade, the future.
Posted by Steve Hiltner at Saturday, December 15, 2012