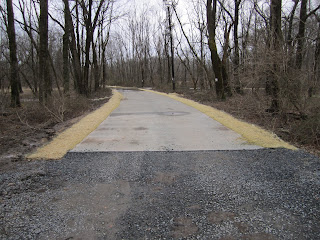 When is pavement a good thing in a wetland? Take the example of Rogers Refuge, a special spot in Princeton just below the Institute Woods. It's owned by the American Water Company. They have a few wells there, but it also serves as a haven for 200 species of birds attracted to its deep forests and extensive marshes. 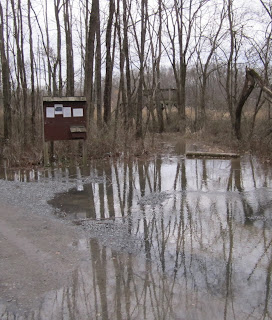 The Friends of Rogers Refuge (composed mostly of birders--I'm the guest plant person) has worked with the water company and Princeton township to manage the wetland as bird habitat. Near the water plant is a kiosk and several observation platforms overlooking the marsh,  open to the public and all accessed via a gravel road off of West Drive. 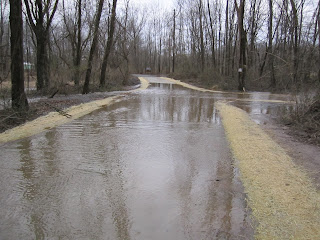 The road, built long before laws were passed to discourage building in floodplains, impedes the flow of water from the upper marsh (on the right) to the lower marsh (left). When the nearby Stonybrook River floods, like it did last week, it swells into the marsh and sends water flowing over the road. Every time this happened in the past, gravel from the road would be washed into the lower marsh, and the water company would have to repair the road.

Now, with pavement laid in short sections where the washouts used to occur, plants growing in the lower marsh will no longer get smothered in gravel, and there won't be an ongoing need to bring heavy equipment in to keep the road open. I'm sure state regulations and the Department of Environmental Protection made it very difficult to get permits to do this (I've heard it was a three year process!), but the result is positive for the wetland, and for anyone wishing to visit.

The most remarkable thing about this, for me personally--having advocated over the years for so many things in Princeton--was to return and find that the water company had actually gone ahead and done it. I've encouraged the township to pave a similar patch of unpaved driveway that sends gravel downstream at Mountain Lakes Preserve, but the regulatory hurdles may have proven too difficult to overcome.