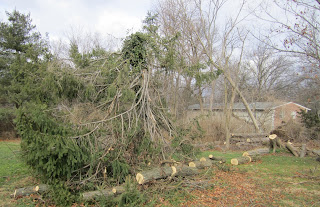 This hapless spruce tree lost its top in a previous wind storm, then suffered a hit from a black locust felled by Hurricane Sandy. 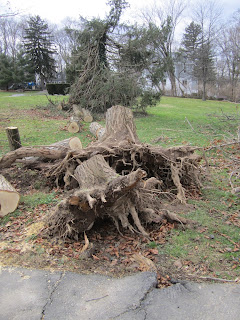 A whole line of black locusts was toppled in Quarry Park by the hurricane. They, like many other fallen trees in town, were located on the west side of a clearing, in this case the parking lot for the Senior Resource Center on Harrison Street. The high winds came from the east, gathered speed in clearings, and then walloped the trees on the far side.

I, too, lost a tree situated like this, on the west side of a playfield. A similar pattern is noticeable where winds gathering speed across the meadows of Tusculum slammed into the forests of Mountain Lakes, and in the devastation of a 200 year old grove of trees just west of a long stretch of Carnegie Lake. One question is whether the extraordinary damage has been caused only by the excessive wind speed or if recent high winds came from an unusual direction.

We're all wondering if the trees left standing have proven themselves durable enough to survive future storms as well. It's also possible that some left standing have been traumatized in ways that will be expressed over the next few years, and that some that were protected from winds from the east could prove vulnerable if the next great winds come from a different direction. The one thing that's clear is that no one's in a hurry to find out.
Posted by Steve Hiltner at Sunday, December 30, 2012