A Mathematician's Dot and Line Forest 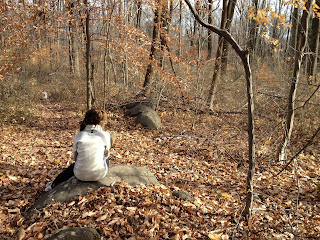 This shot was taken while walking down off the Princeton Ridge towards the small farmstead in Herrontown Woods, in eastern Princeton. It was a clear, crisp afternoon earlier this fall. The boulders, which diminish in size as one walks downhill, add punctuation to the woods--dots to go with the trees' lines.

Which reminds me of one of my favorite books growing up, "The Dot and the Line: A Romance in Lower Mathematics", in which a line falls in love with a dot and seeks to win her over from her squiggly boyfriend by overcoming his stiffness and learning how to make all sorts of magnificent shapes. It's still available online, and there's even a ten minute animated movie version on youtube.

The first 81 acres of Herrontown Woods were donated to the county back in 1957 by a famous mathematician and his wife, Oswald and Elizabeth Veblen. They lived the last decades of their lives there, in the Veblen House, clearly in love with the dot and line woodlands of the ridge.

Though my daughter didn't know it, her pause next to the trail to gaze across the light-filled woodland was exactly what the Veblens had in mind. According to a New York Times article at the time of the donation, "Mr. and Mrs. Veblen donated the tract because they felt this rapidly developing area was in dire need of a public park. 'There is nowhere around here where you can get away from cars and just go walk and sit,' Mrs. Veblen said. 'Princeton, when we came here in 1905, was a lovely village,' Mrs. Veblen declared. She explained that the donation was made in the hope that a little bit of this outdoor atmosphere will be preserved.'"

And so it was, and so has much more been preserved over the decades, building on that simple but central vision of a place to go walk and sit. The romance of the dot and the line ends with a moral: "To the vector belong the spoils." We are surely the vectors, imbued with direction and magnitude, with many trails and vistas to call our own.
Posted by Steve Hiltner at Monday, December 24, 2012