A Walk in Gulick Park 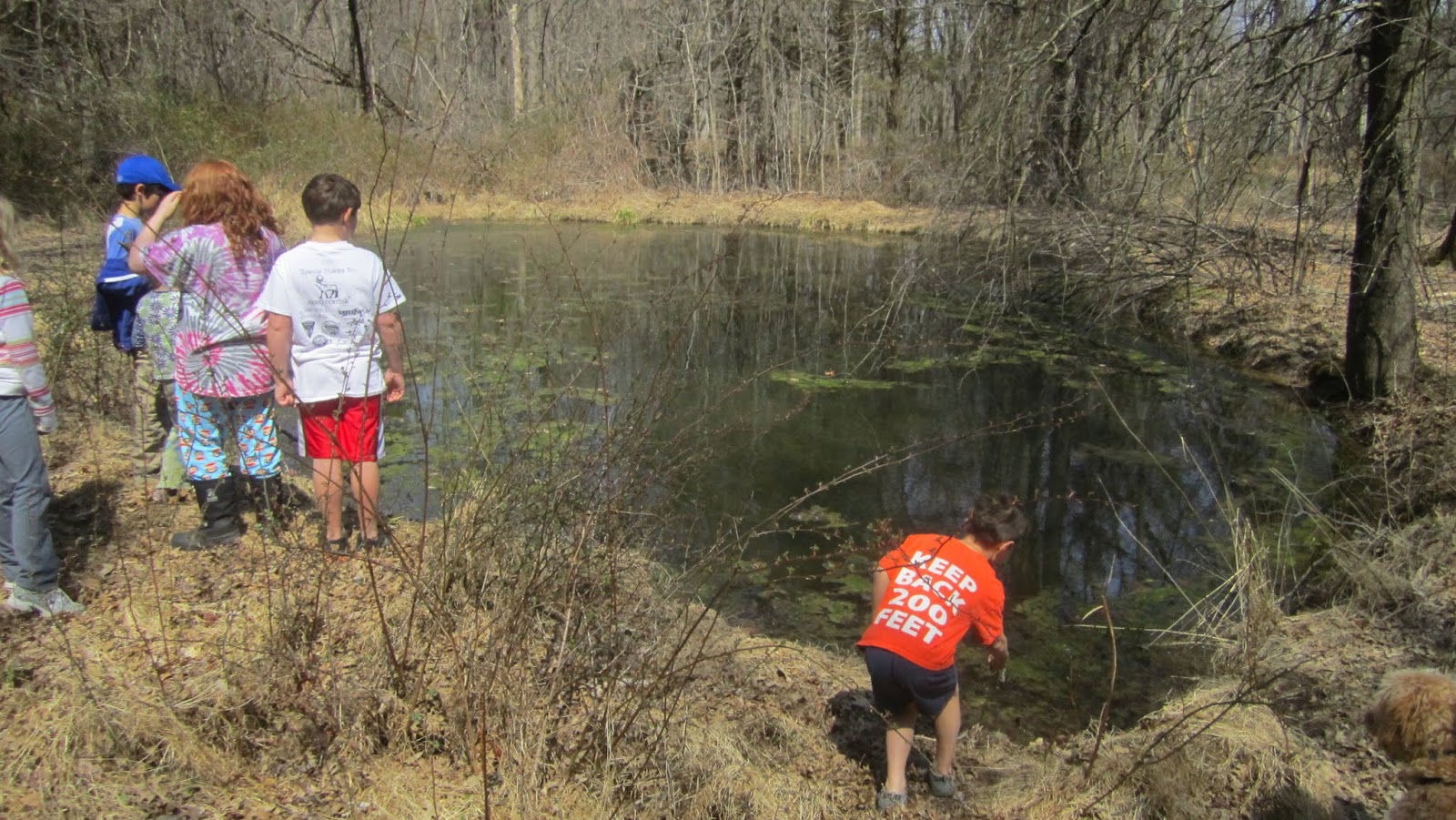 Thirty kids and adults, plus a dog or two, gathered on a beautiful spring afternoon this past Sunday for a walk through Gulick Park, a little known nature preserve in a part of Princeton out 27 that may once have been thought of as Kingston. The loop trail starts at the eastern deadend of Terhune Road, a road that changes name as it approaches Snowden Lane, then becomes a bike path before re-emerging as Terhune Road again over near Dodds Lane.

We found tadpoles in that there pond, which reportedly holds some water even in the drier depths of summer. 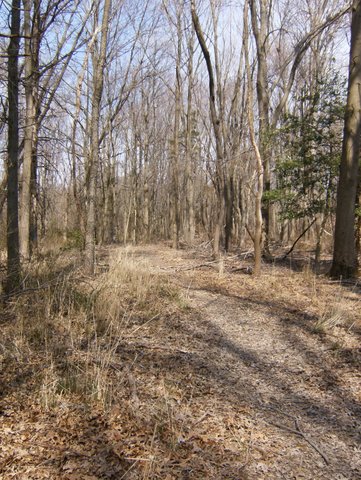 The paths through this lowland woods can be muddy after a rain, but had dried up nicely in preparation for our walk. 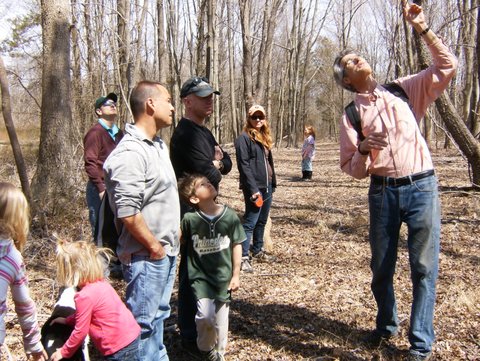 Some appeared skeptical as I, in my role as naturalist for the walk, demonstrated the craned-neck approach to identifying red maples, pointing towards their tiny red flowers high overhead. Other tree species spoke their names through their bark--the black "potato chip" bark of black cherry trees, the mottled, army fatigue bark of sycamores--or the downward slant of the many pin oaks' lower branches. The numerous eastern red cedars--the first trees to cast shade in the abandoned agricultural fields decades back--now hang on in the shade of the higher, deciduous trees that have since grown around them. A scattering of evergreen American hollies offered patches of green in a sea of winter's browns and grays. 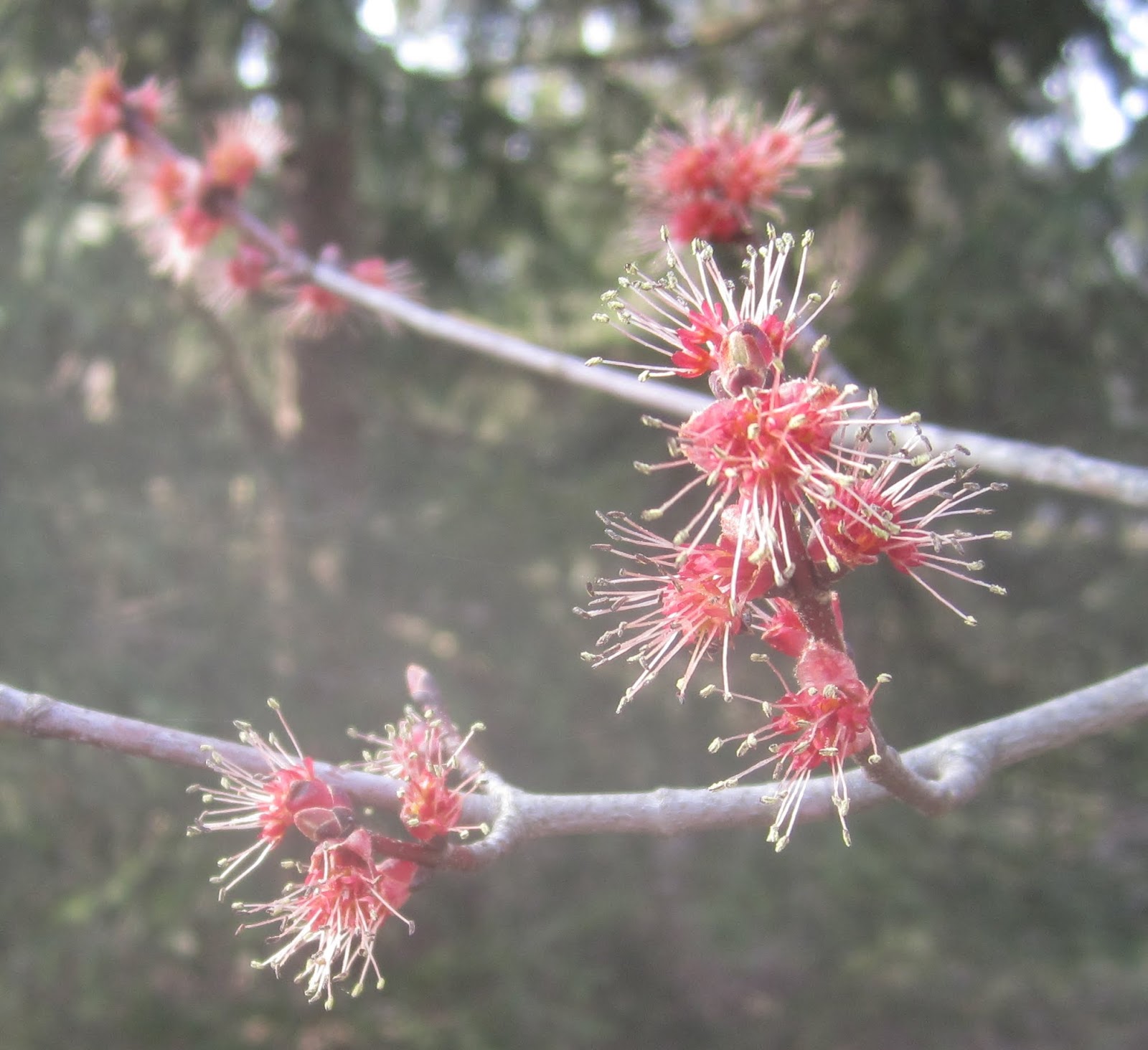 Just to prove I wasn't pointing at phantoms, here's a closeup of the red maple flowers that give the high canopy of lowland woods a red tinge this time of year. 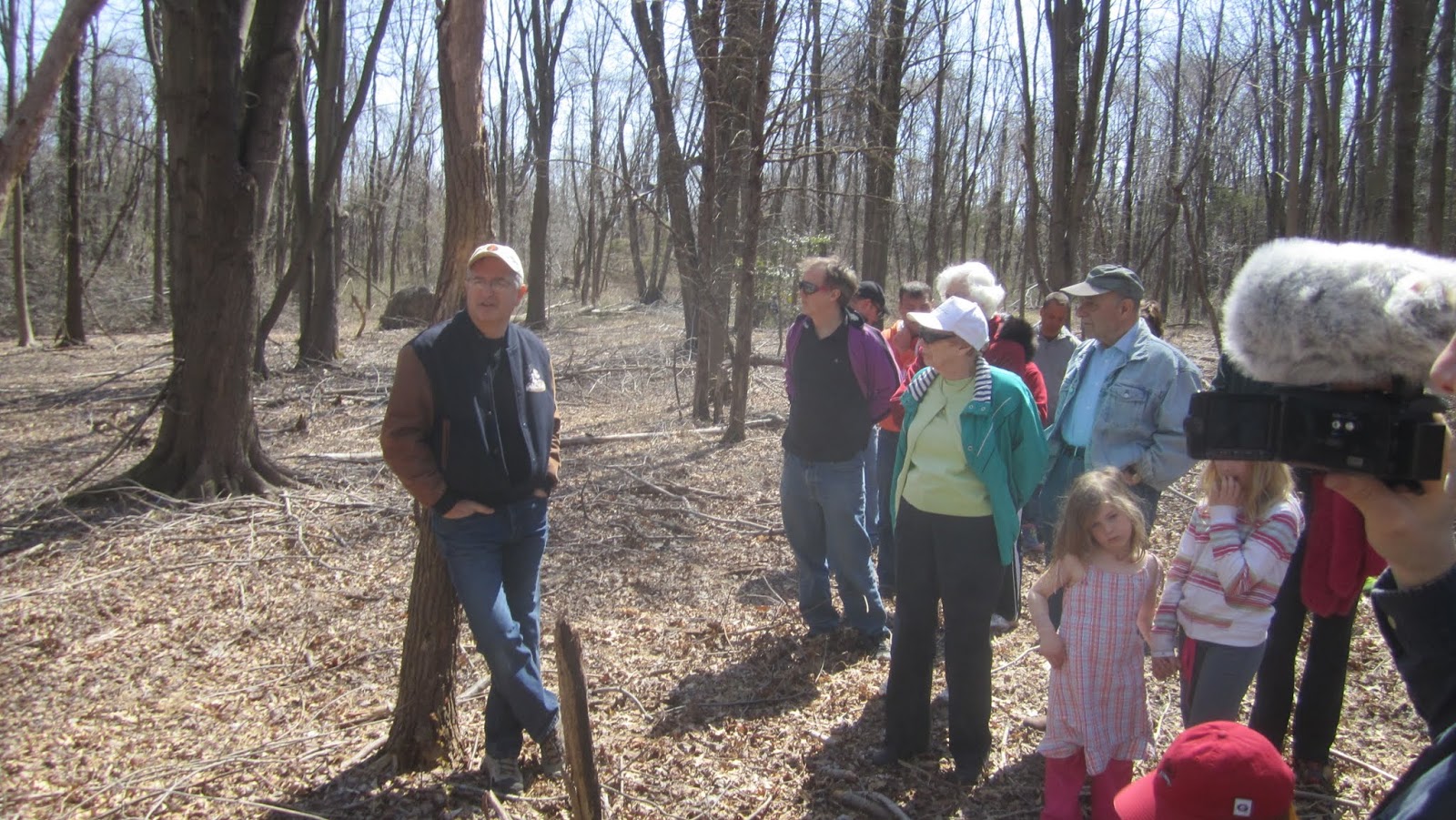 Ed Simon, who leads volunteer efforts to maintain the trails (no easy task given the tree-toppling storms of recent years), told stories of the park's past and present. Though he and others have removed most of the barbed wire from the woods, a few remnants still tell of a time when the Gulicks had a massive bull that would occasionally escape into the neighborhood.

The video camera on the right in the photo is being held by Kurt Tazelaar. He and Sally Curtis have been documenting many environmental events in town. 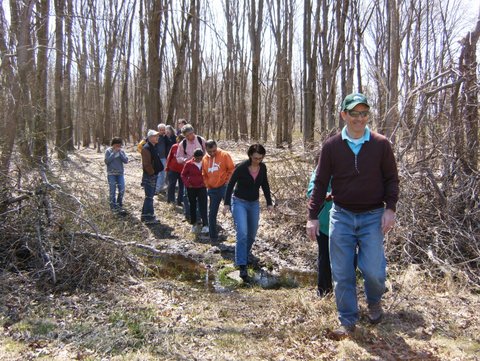 There was the requisite stream crossing to test our balance, beyond which we came upon the field of Christmas trees. It was interesting to hear that many of the spruce trees found in Princeton's parks, including those behind my house in Potts Park, got their start in this field. I pointed out the dried remains of purple-top grasses in the field, and the graceful broomsedge (actually a grass) that gives the field an attractive bronze hue. 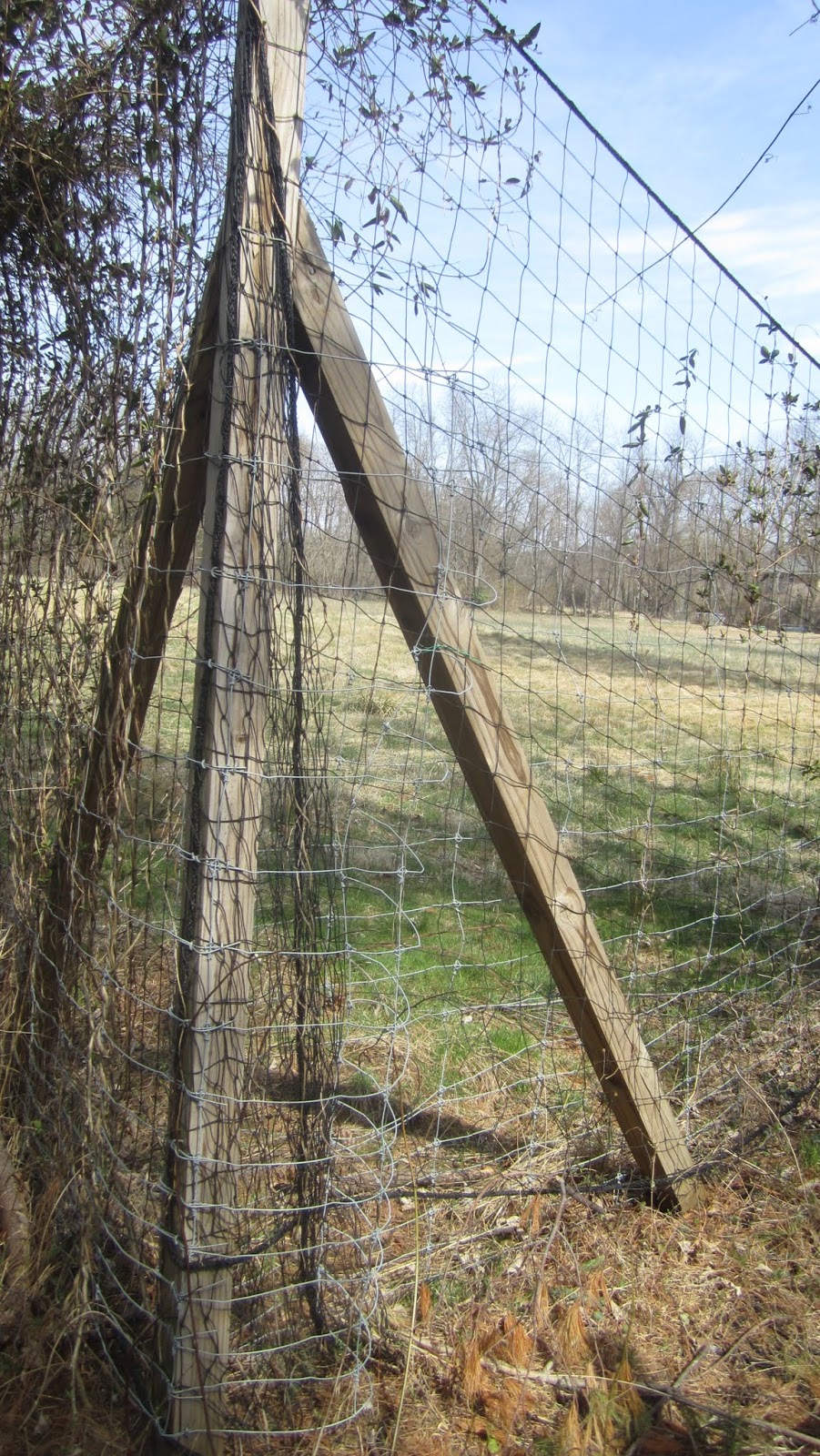 Beyond this high fence is the land still owned by the Gulicks, whose family ownership extends back to Revolutionary War days. A part of their house facing Route 27 is said to extend back to the 1600s, when it served as an inn conveniently located halfway between Philadelphia and New York. Each 50 mile stretch was a days ride on horseback. 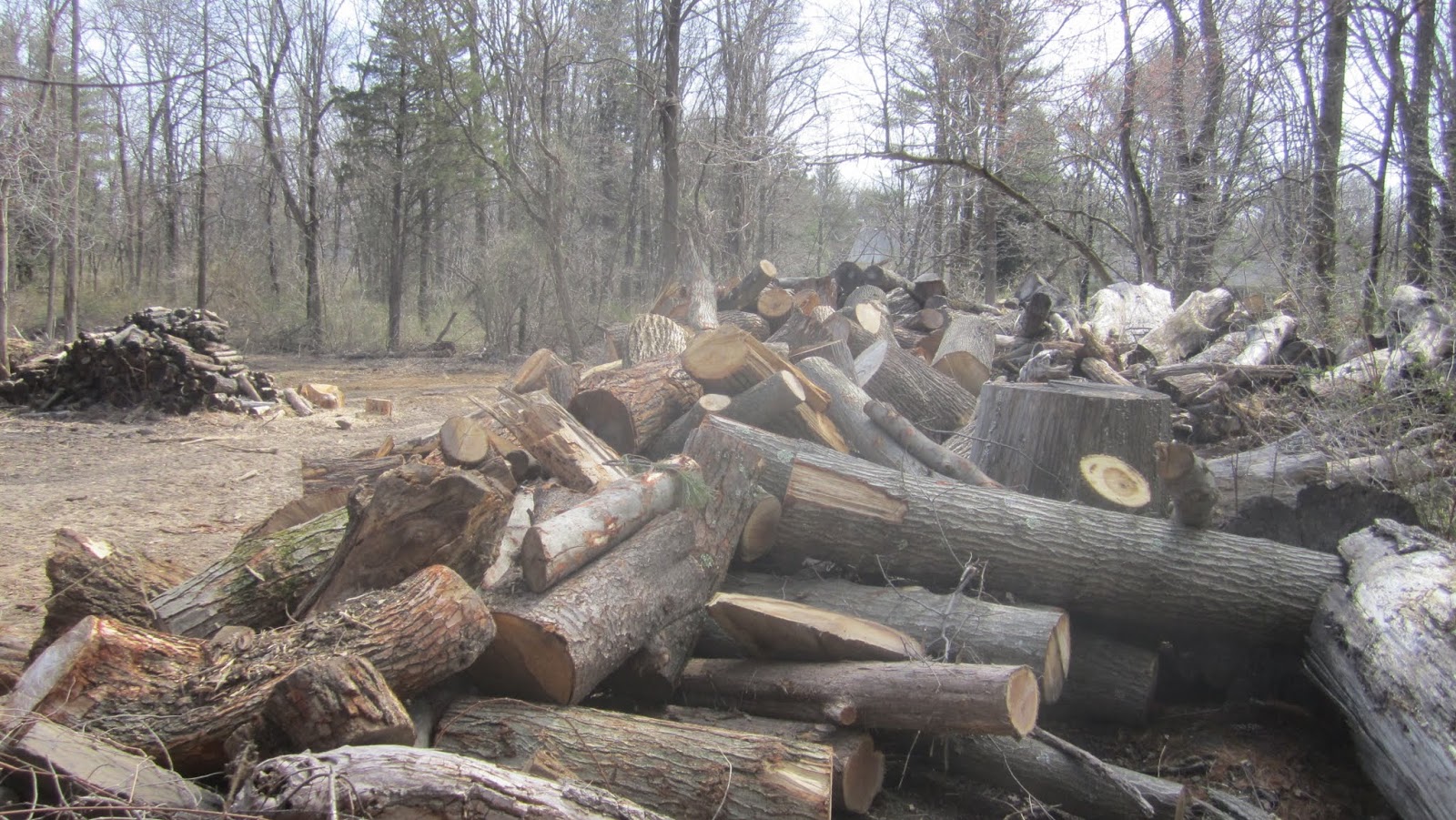 Near the fence was an impressive pile of firewood, which the Gulicks apparently sell as a means of satisfying the requirements of their farm easement.

Along the trails, where the sun gets in, are some fine stands of blackberry, with its ribbed stems, and wineberry, a non-native cane with fuzzy purplish stems that bear raspberry-like fruit. A number of hikers expressed interest in returning in summer for the harvest.

The walk was made possible through the organizational energies of Nicole Bergman. There's talk of an upcoming workday to clear some of the trails still blocked by fallen trees.
Posted by Steve Hiltner at Friday, April 12, 2013