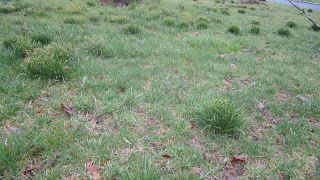 As master golfers stride the perfectly groomed grounds of Augusta National this weekend, showing their mastery over a landscape that's kept in a perpetual state of arrested development, let us glance out the window for a moment at the less applauded realities of the suburban lawn. In the Masters tournament, only the hazards--the trees and shrubs--are allowed to reach maturity. For the golfer, any encounter with interesting plants is a sign of trouble. And in the yard, the main threat to calm conformity is the plant that seeks to lead a full life, by flowering and maturing its seed. (Full disclosure: I lettered in golf in high school, spent part of a summer mowing fairways, and probably developed a keen eye for plants while searching for lost balls in the nearby corn fields and the very rough rough of our neighborhood's rough-hewn golf course.)

The grasslike imposter dotting the lawn in the first photo is Star of Bethlehem, which will later have a pretty white flower but tends to spread. It's in the lily family, is native to eastern Europe and the Middle East, and spreads to natural areas as well as across lawns. 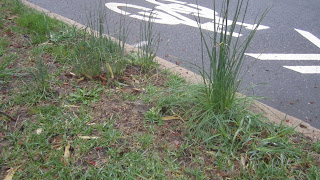 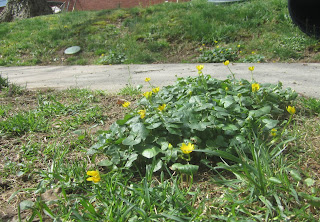 Blooming now, along with the dandelions, is Lesser Celandine. It shows up as one or two plants in a yard, then becomes more numerous each year until much of the lawn is displaced. Here's a new infestation, with maybe five plants or so. It would be easy at this point to dig it up, put the diggings in the trash (not the compost bin, where it will then be spread elsewhere), and avoid the takeover. But most people are seduced by its flowers when it first shows up, and don't grow alarmed by its aggressiveness until it's already become established. 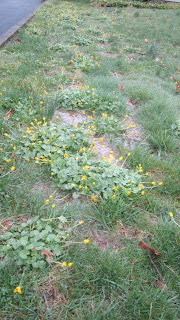 Here's a more advanced example. You can type lesser celandine in the search box at the top of this webpage to see examples of it forming a green pavement in lowlands, apparently of no use to wildlife. 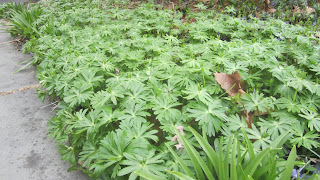 A related plant is Winter Aconite, which has dissected leaves and blooms much earlier in the spring. It spreads underground, but I've never seen it spread across lawns or invade natural areas. Both are non-native spring ephemerals that will turn brown in early summer. 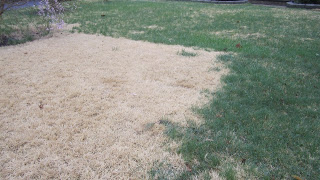 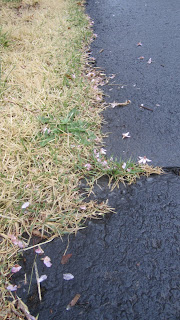 The rhizomes/stolons/roots of Bermuda grass are so strong that they will spread into and break up asphalt over time. It is a very aggressive grass and hard to weed out of other plantings if it invades flower beds or natural areas. 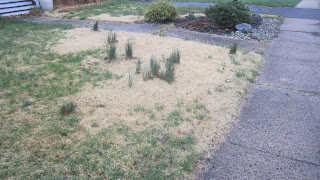 This blotch-on-blotch effect of wild garlic sprouting up in Bermuda grass actually makes a nice contrast, though I'm not sure anyone would try to do it intentionally.

A modest proposal: One way to get rid of lawn blotch is to get rid of the lawn.
Posted by Steve Hiltner at Sunday, April 14, 2013