A lot of people call this flower "marsh marigold". It's not. Notice the leaves stay close to the ground, and the small flowers have many petals. This plant is actually Lesser Celandine, a pretty but highly invasive exotic plant that will spread across lawns and coat floodplains in what looks like green pavement. I found this one specimen in my yard, and because there was only one, I was able to dig it up, hopefully before any seeds were produced, put it in a plastic bag, and threw it in the trash, not the compost.

(Update: Most homeowners don't notice lesser celandine, also called fig buttercup or Ficaria verna, until there are too many to dig. Digging also requires getting every last tuber in the roots. Oftentimes, the only practical option is to use a targeted dose of herbicide. Though herbicides are demonized due to their overuse in agriculture, the selective use of low-toxicity herbicides is an important part of invasive species control, just as low-toxicity medicines are selectively used in medicine. I use a 2% wetland-safe version of glyphosate, which can be bought from companies other than Monsanto.) 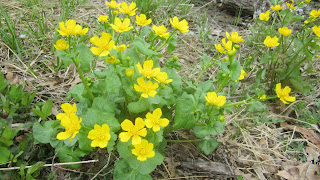 The real marsh marigold, shown here, is a native with five-petaled flowers, stands more upright, and is so rare that I've only seen it growing wild once in my life. These particular plants are in my backyard, purchased from Pinelands Nursery in Columbus, NJ. I also planted some at the Princeton High School Ecolab Wetland that are in full bloom right now. 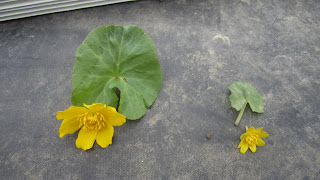 The flower and leaf of marsh marigold (Caltha palustris) are on the left, with lesser celandaine (Ranunculus ficaria) on the right. 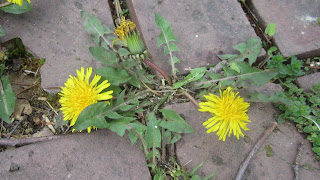 Dandelions blooming now can make it harder to tell if you have lesser celandine in your yard. 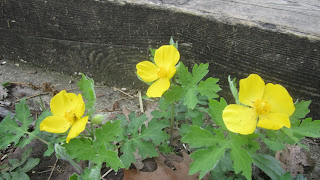 Adding to the confusion of yellow this time of year is the Celandine Poppy (Stylophorum diphyllum), a native in the poppy family that was common in the University of Michigan arboretum, but seldom seen elsewhere. A friend in Princeton gave me some, and it has seeded into the flower bed of my backyard. Like the marsh marigold, its rareness in the field bears no relation to its willingness to grow when planted in the backyard.
Posted by Stephen Hiltner at Monday, April 22, 2013