A Walk Through Herrontown Woods and the Princeton Ridge 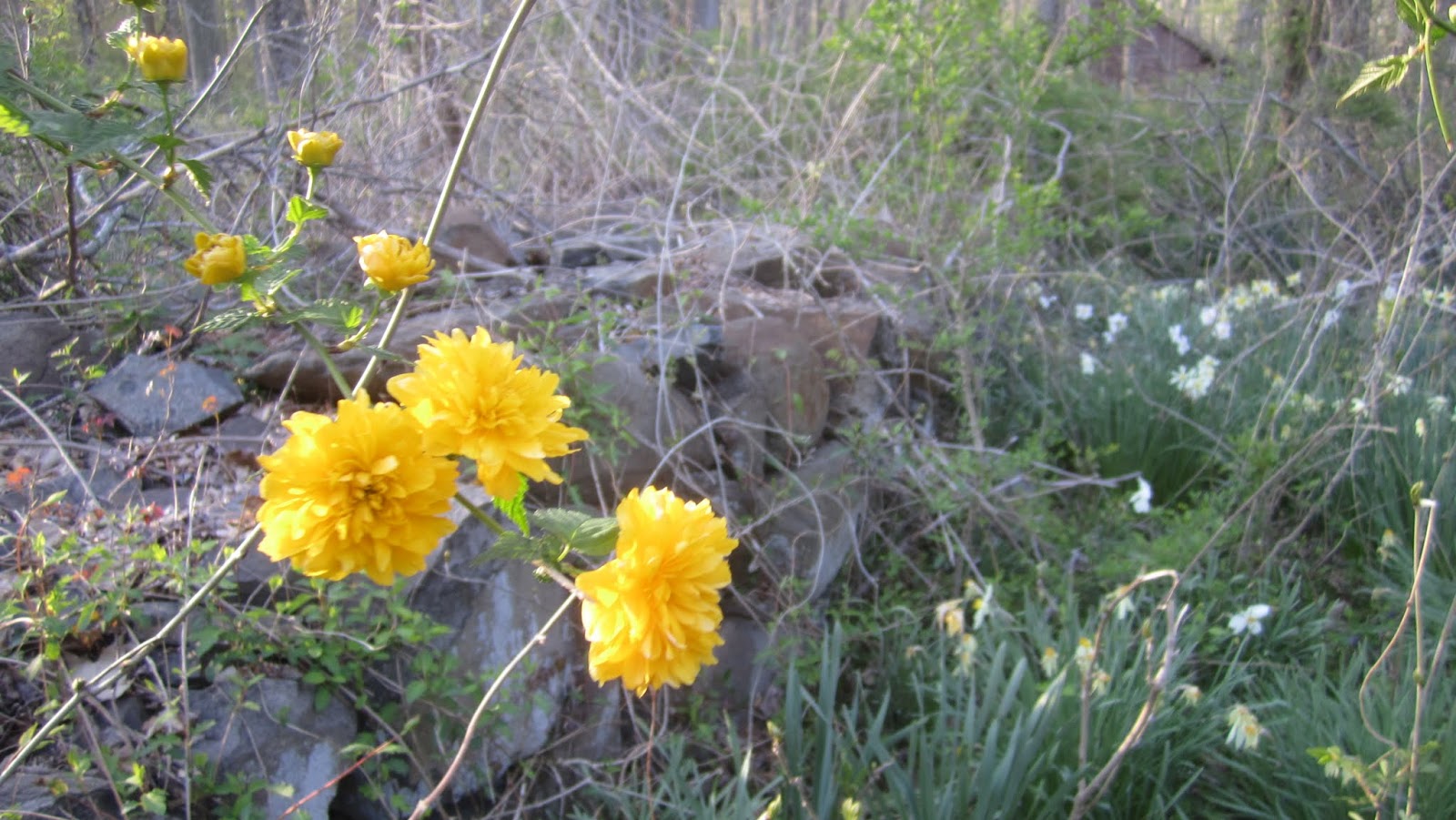 By chance, my daughter and I both had the same idea at the same time--take a walk through Herrontown Woods. Must have been the call of a spring day that finally reached us late in the afternoon, deep in our suburban exile.

Sightings of a pileated woodpecker and a wild turkey awaited us as we headed down Snowden Lane, traffic squeezing by us as we negotiated the sections that still don't have a bike trail (a bit of a hint there to the Ministry of Bike Trail Construction).

A short hike up from the preserve's parking lot are the Veblen cottage and, through an opening in the fence, the Veblen House, where remnants of Elizabeth Veblen's many daffodils and a lone Kerria still bloom. The Veblens--Oswald being the famous visionary mathematician--donated the farmstead and Herrontown Woods to the county back in 1958. In retrospect, it appears to have been Princeton's first nature preserve, the seed from which the now preserved corridor of the Princeton Ridge grew. 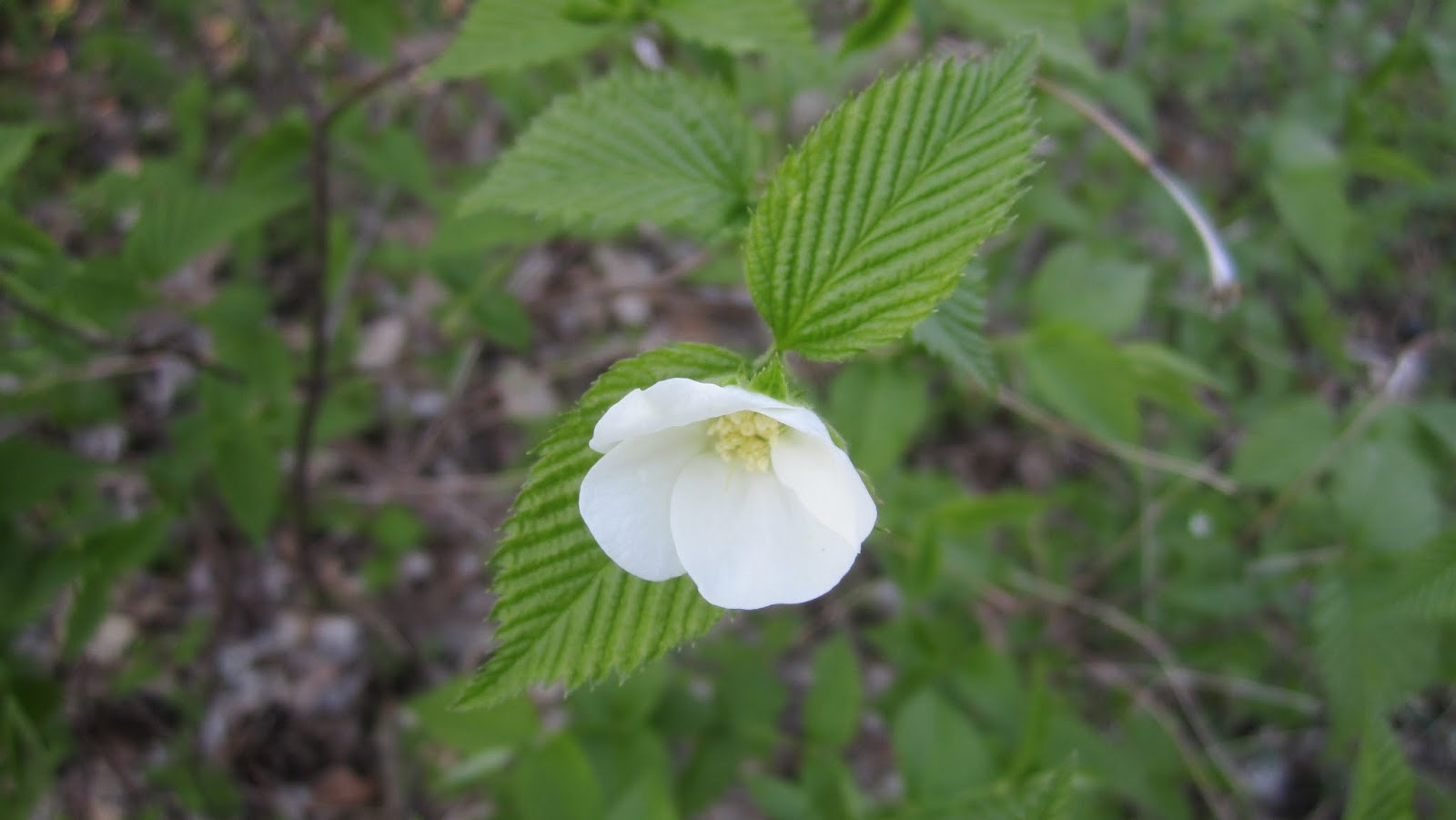 A patch of mock orange blooms (update: I've since learned that this is actually an invasive shrub called jetbead!) not far from the Veblen farmstead. Wood anemones and Christmas ferns grow in profusion along the paths in some areas, testimony to the capacity of these rock-strewn slopes to keep the plow from erasing the land's memory. (2021 update: What looked like mock orange proved to be jetbead, a nonnative that has been showing up in various preserves around town.)

A little ways west of the farmstead, my daughter told me to stop and listen to the echo. Our shouts reverberated among the boulders to the count of four. In addition to having saved a rich flora, the boulders enrich the acoustics as well. 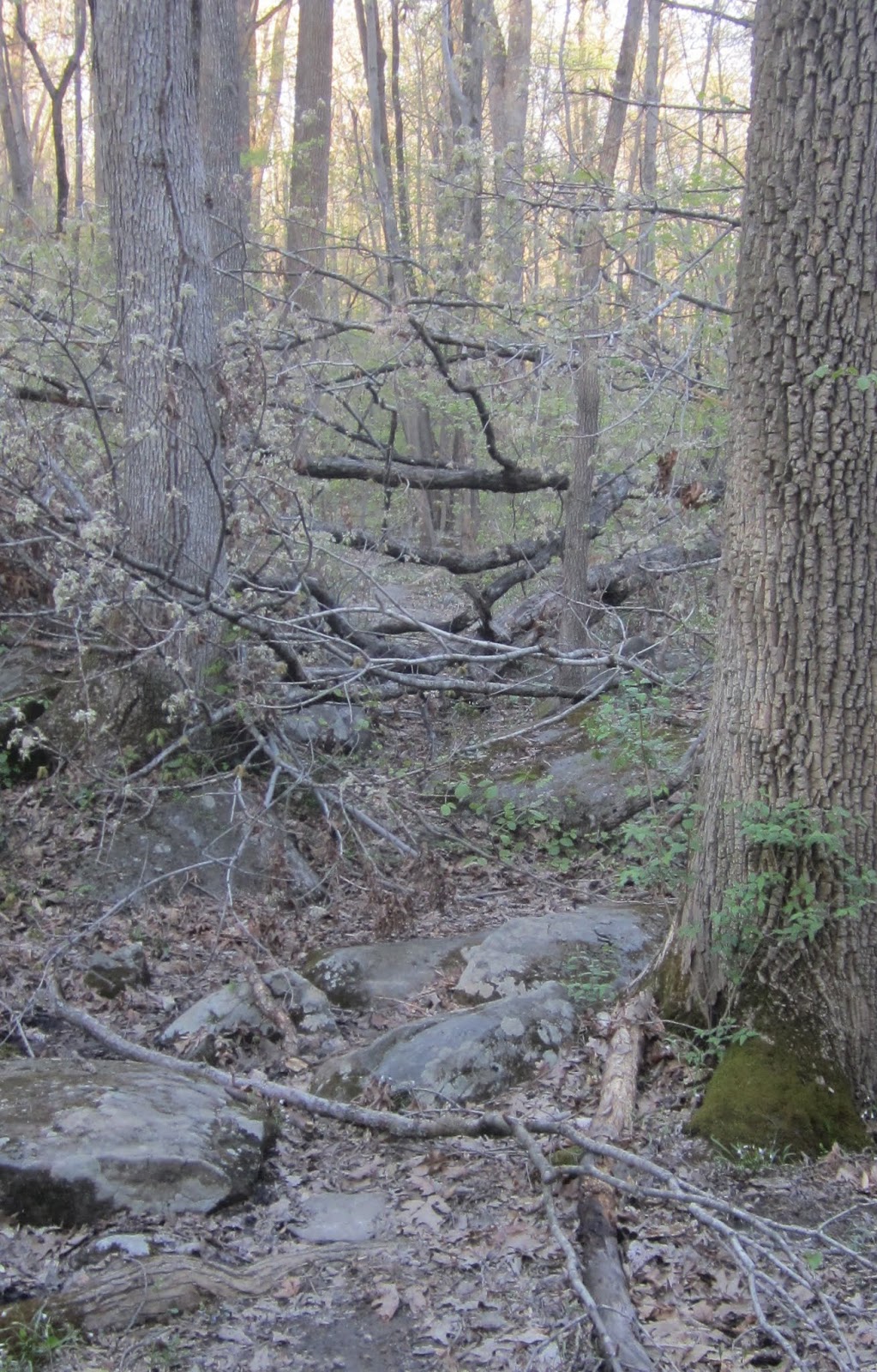 Trails have gotten more zig-zaggy since Hurricane Sandy. Reaching this blockade, we saw a young man approaching from the other side. With the creation of a Friends of Herrontown Woods in the back of my mind, I said hello, thinking a conversation might lead to recruiting him to help clear trails. Turned out he was training after a long week at the office for a Ninja Warrior contest, and was using the Herrontown Woods obstacle course to hone his reflexes. For him, the more challenging the trails, the better. 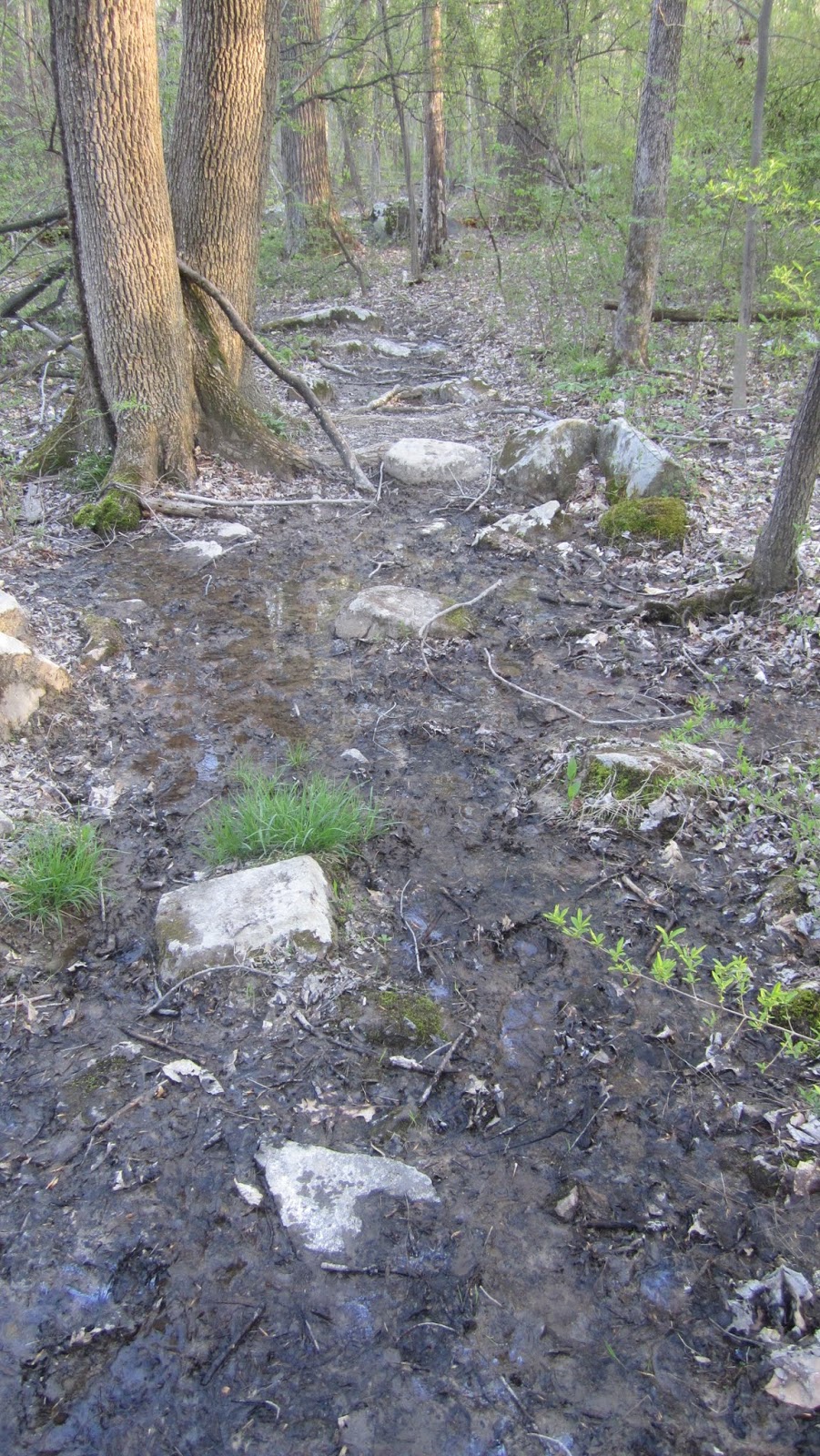 He made quick passage through this muddy stretch, making the long leap from stone to stone. 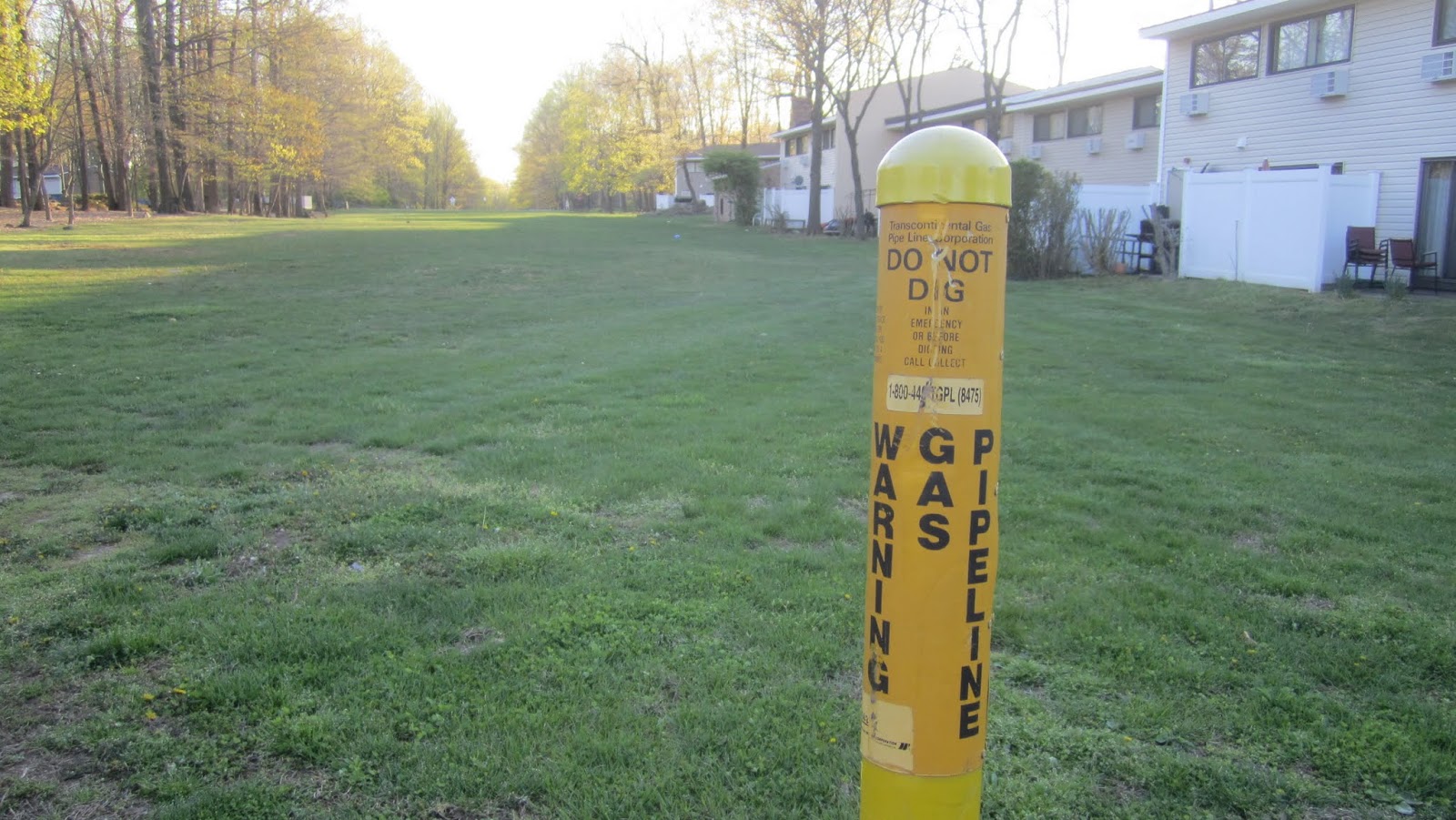 We chose a drier trail that led up to Princeton Community Village, across Bunn Drive from Hilltop Park. Bisecting this affordable housing is a section of the Transco Pipeline, whose proposed expansion has been causing some controversy. The pipeline carries natural gas, and an expanded pipeline would help whisk the nation's shale gas out of the ground and onto ships for export, which seems to undermine the notion of energy independence in the longterm. 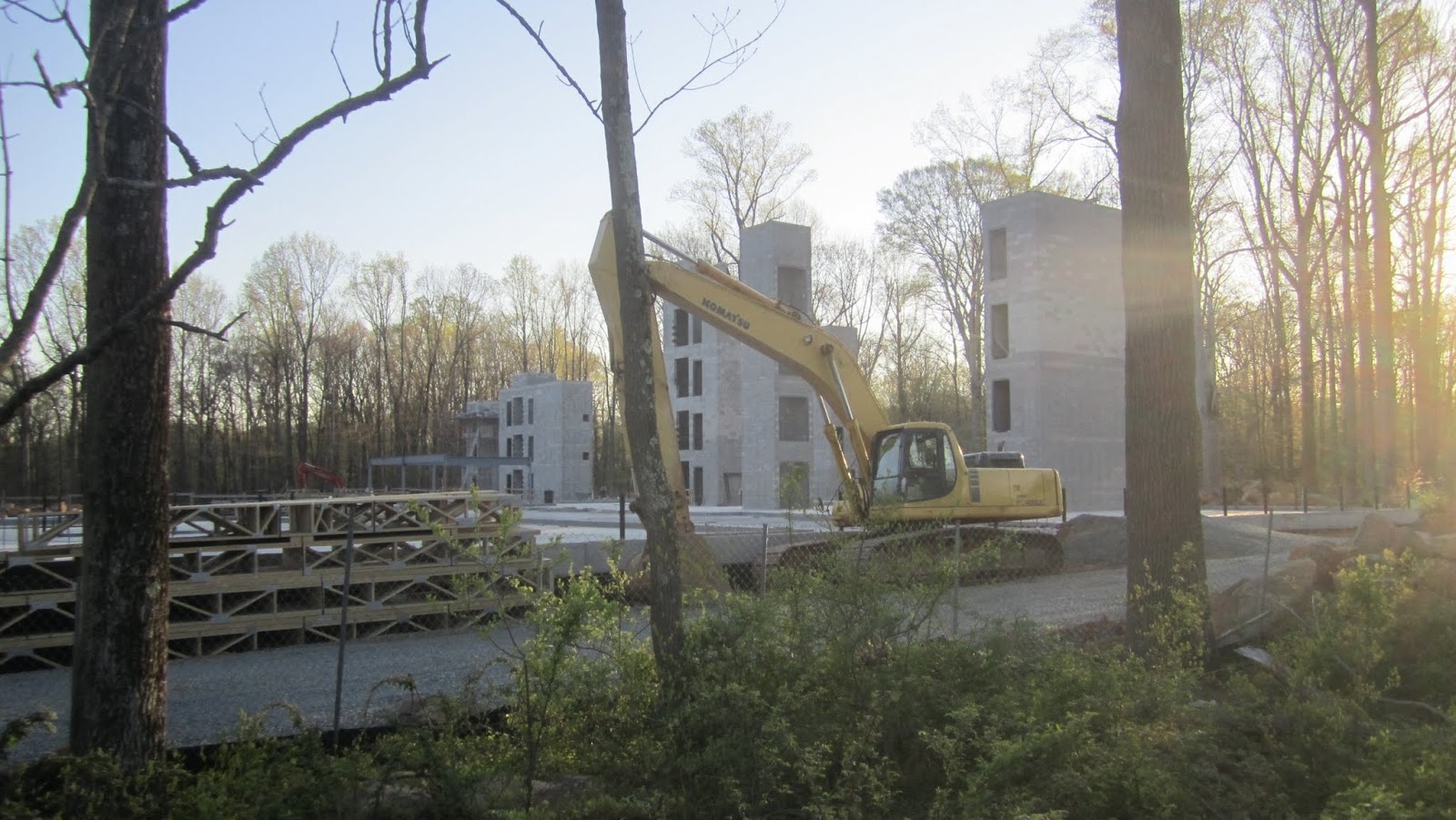 Across Bunn Drive, behind the soccer field at Hilltop Park, Bob Hillier's Copperwood development is due to be completed later this fall, according to their sign. 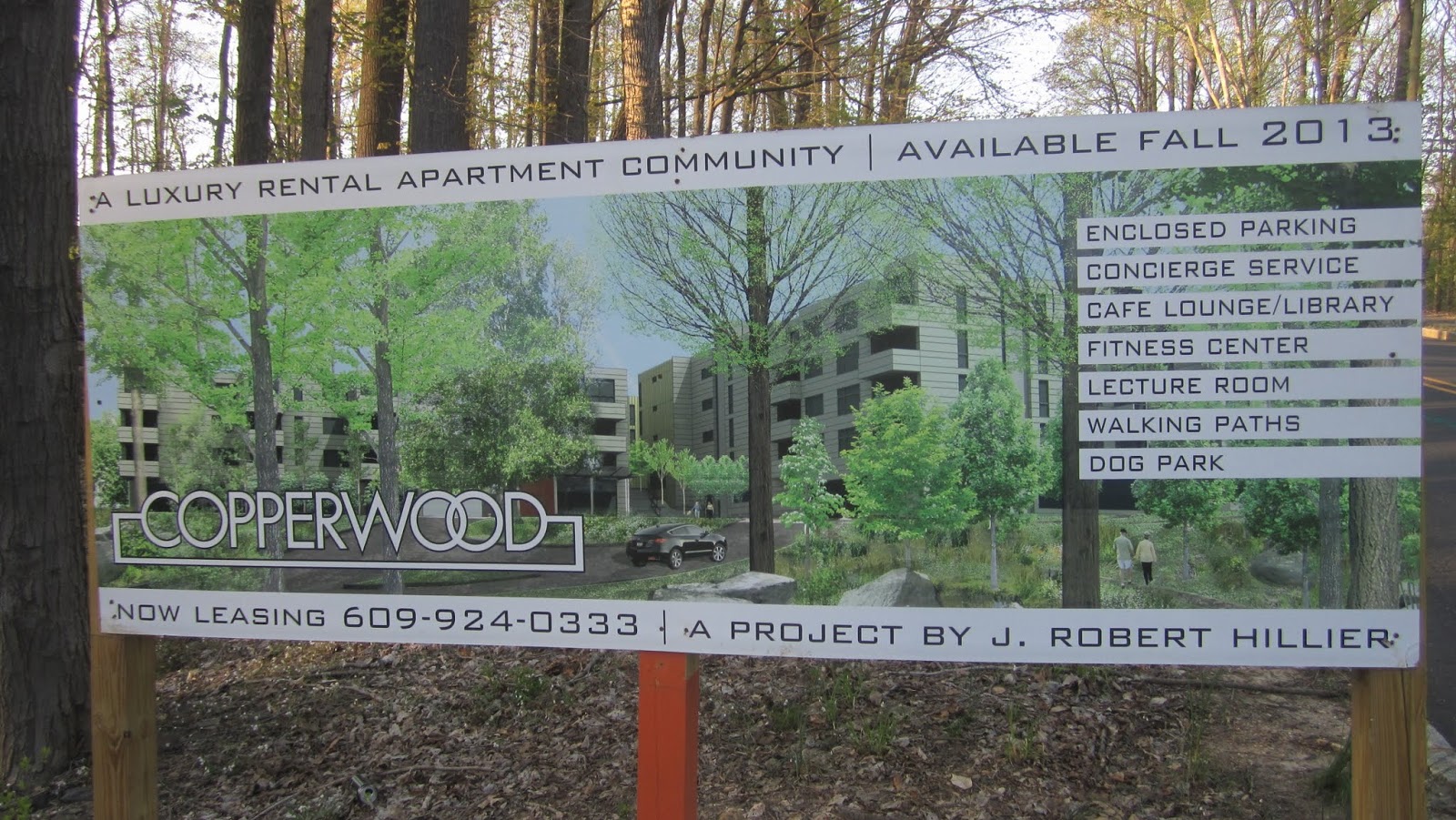 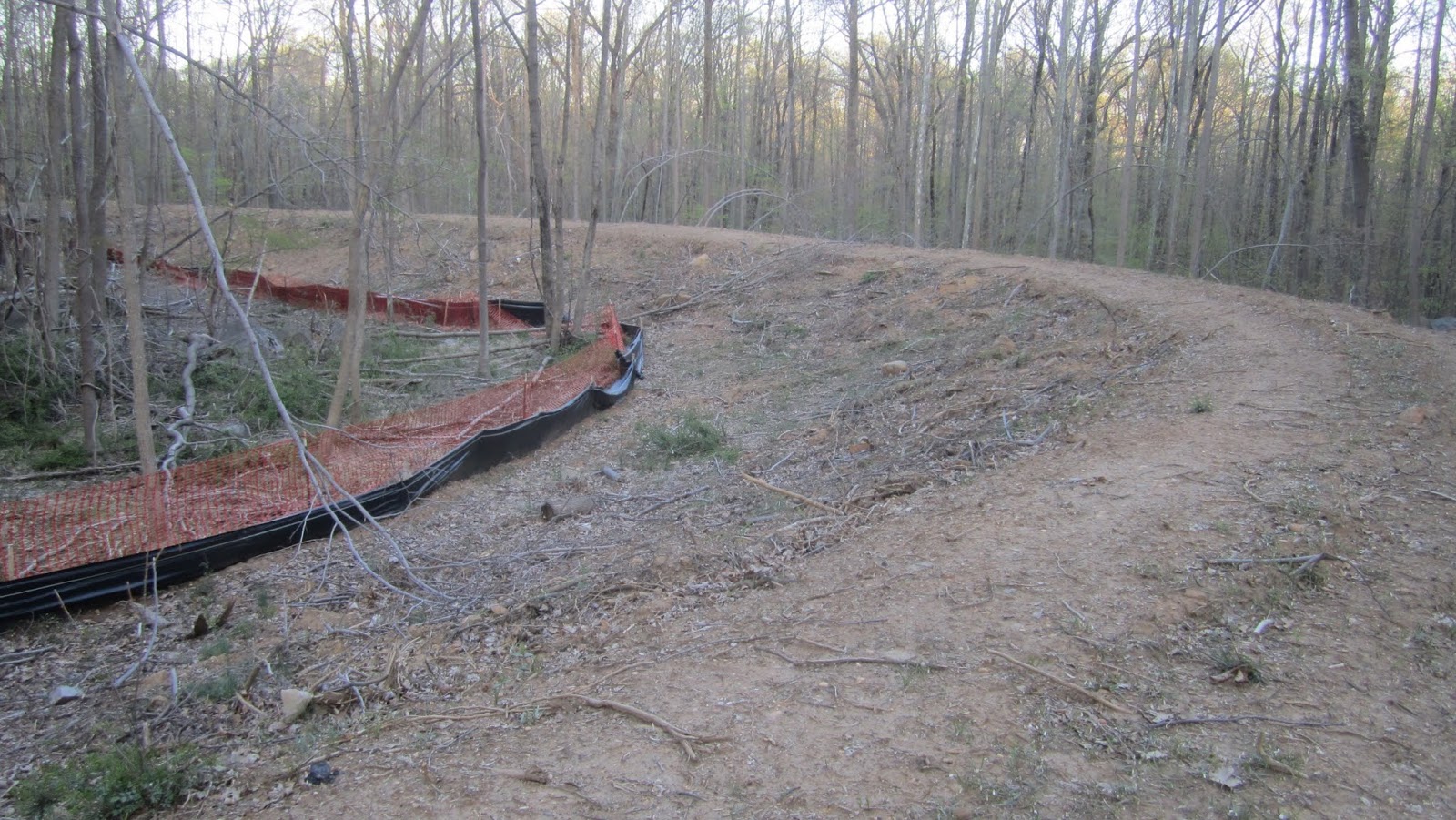 As part of the agreement to build the development, this massive stormwater retention basin at the base of the hill, built originally for runoff from the Village, is being repaired. 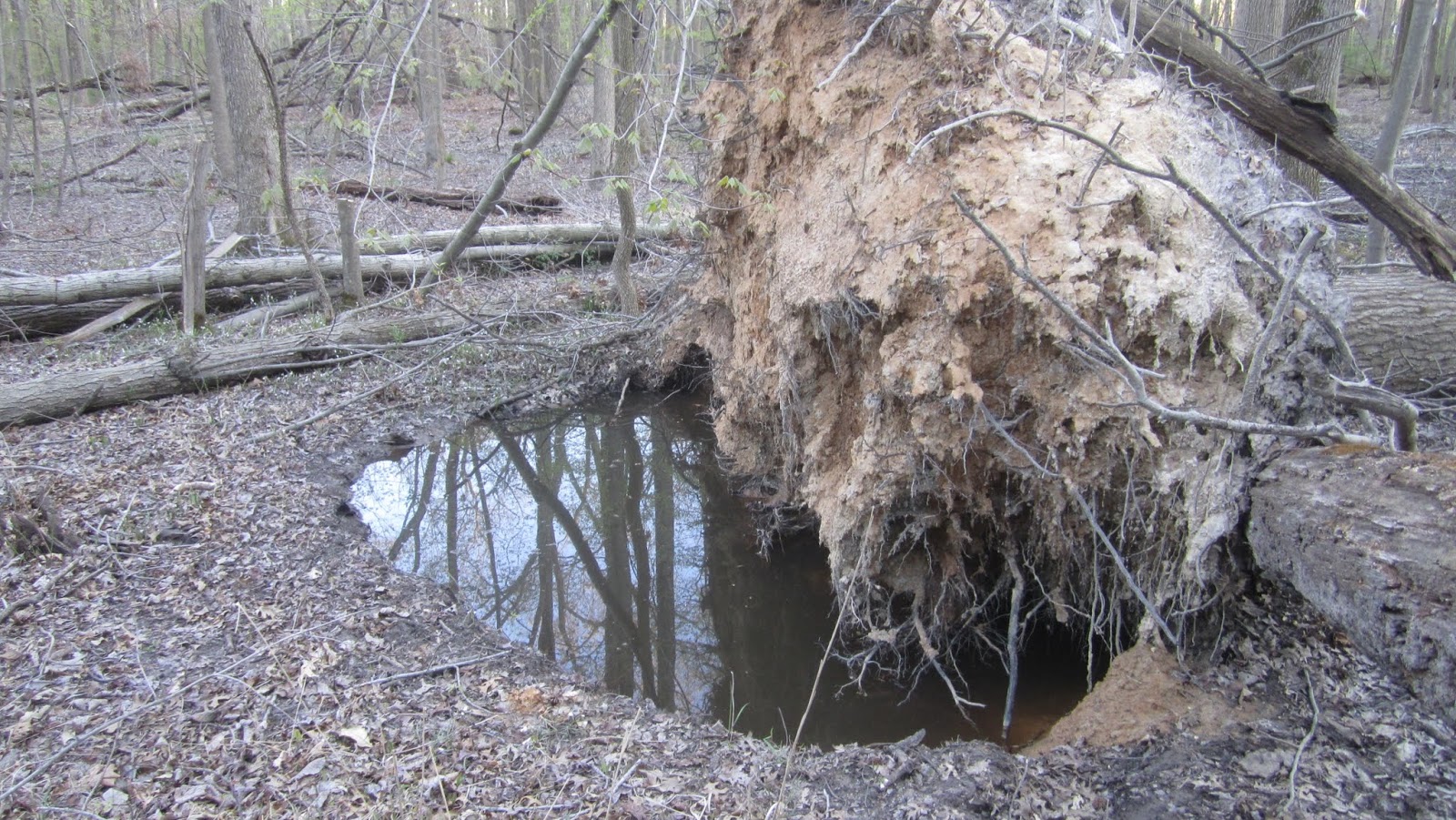 Nature, too, had been at work building its own retention ponds, with some better at holding water than others. Though it's sad to see so many trees blown down by storms in recent years, these pools can be seen as one of the tree's parting gifts, providing a nursery for tadpoles in the spring, and a place where the wild turkey we heard, and then saw, might take a sip as it walks in its gallinaceous manner through the woods. A lumpier land more closely approximates what existed in America before the forests were cleared and the land plowed. Here's a link to other posts about adapting this sort of minipond concept to backyards.

In the recently preserved Ricciardi tract, across Bunn Drive from the new development, a pileated woodpecker swooped by me just twenty feet away. It landed on a nearby tree, pausing between short head-bobbing hops up and down the trunk to scrutinize the bark for signs of insects. Finding nothing, the bird then flew to another tree, where it repeated its survey routine before flying to another, and another. It's reassuring, somehow, to see that this Princeton Ridge forest's inventory of trees are being so thoroughly inspected, and by such a beautiful bird. 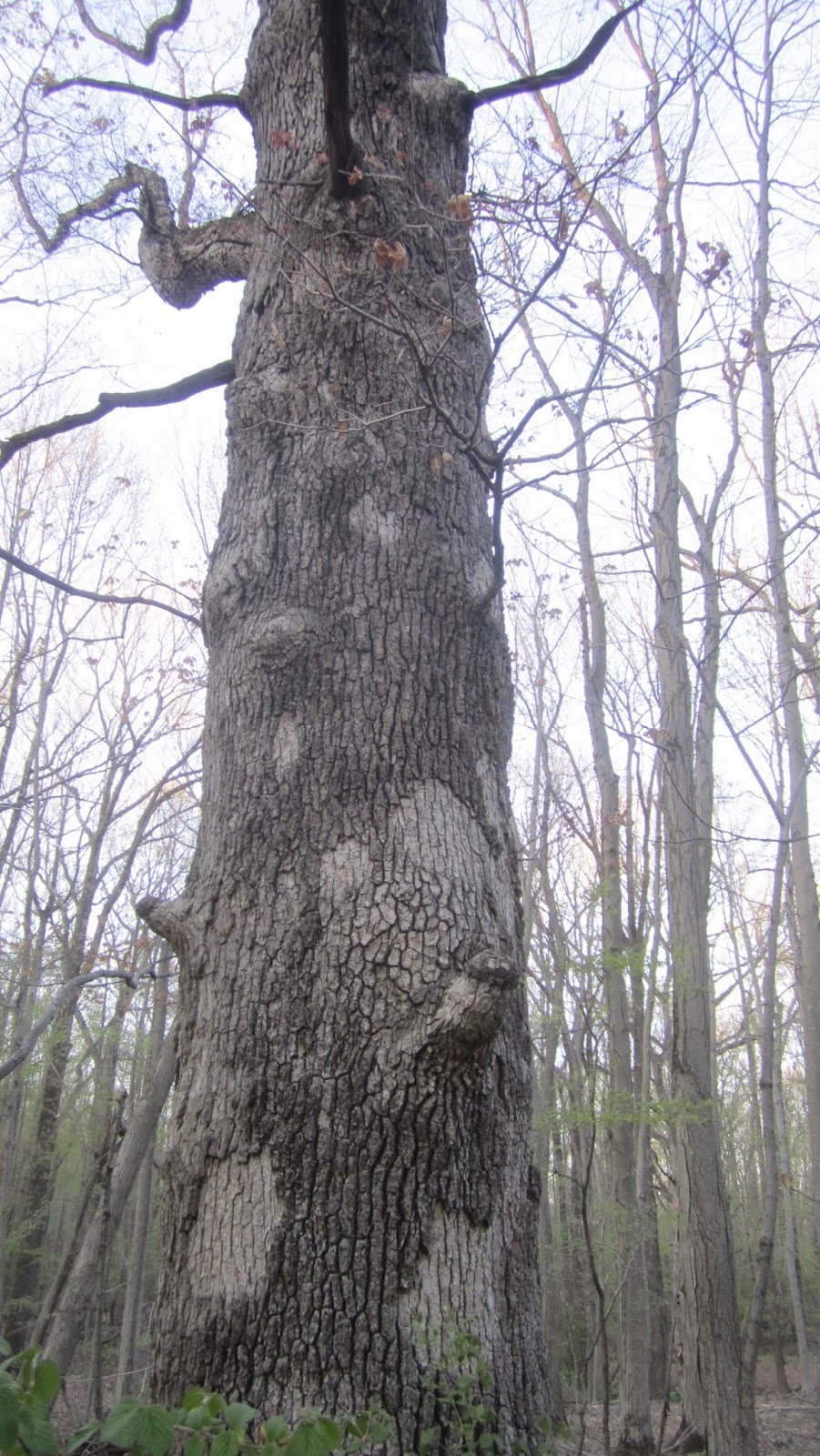 This monster white oak, with its characteristic blotchy bark, has sprawling limbs that suggest it dates back to an earlier, less forested era in Princeton, when trees were more solitary and could spread out. 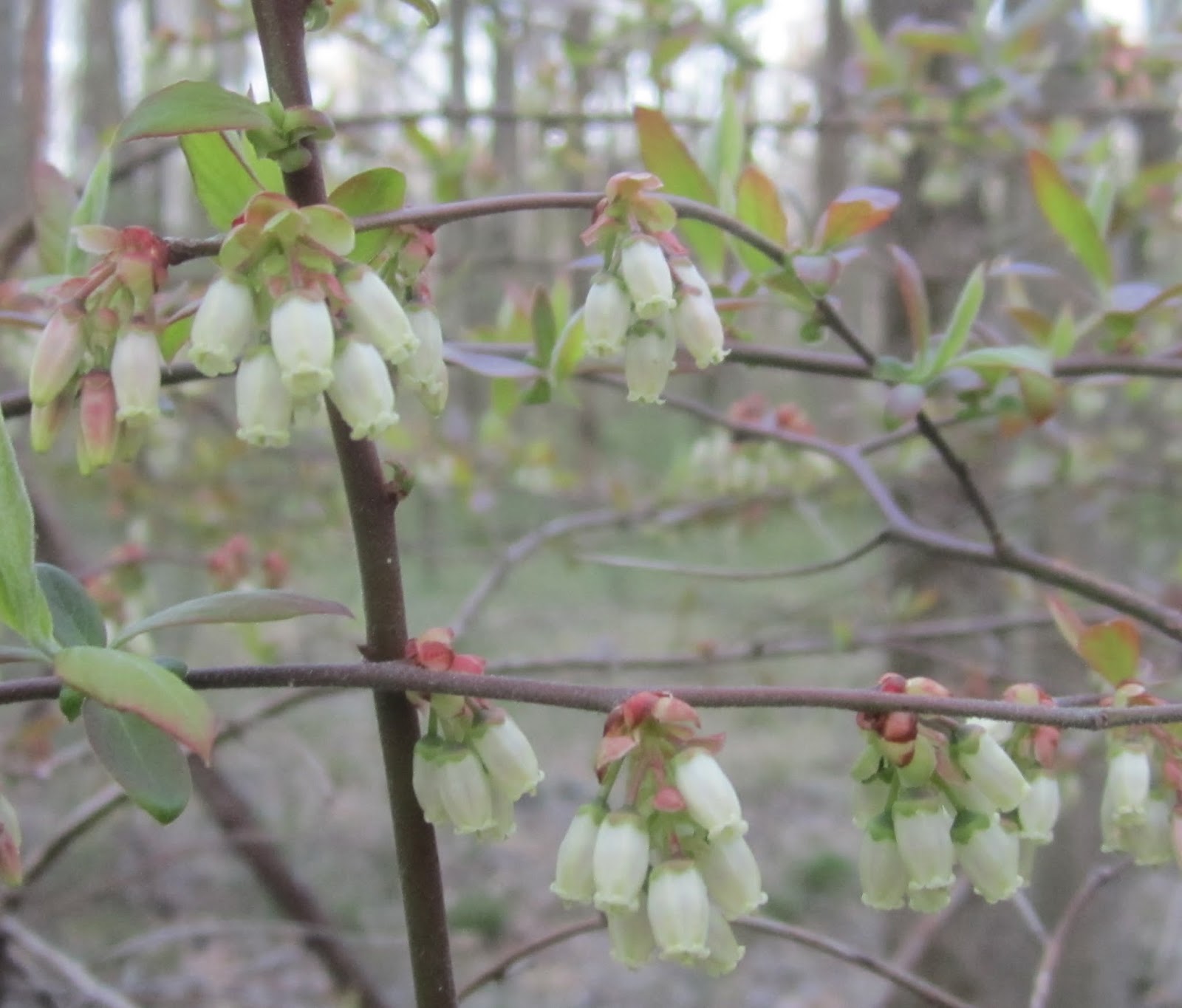 High bush blueberries are scattered through the understory in the 35 acre All Saints Tract. Here, too, you can see how one of the many tributaries of Harry's Brook begins to form out of pools and rivulets, fed by seepage from the hill. 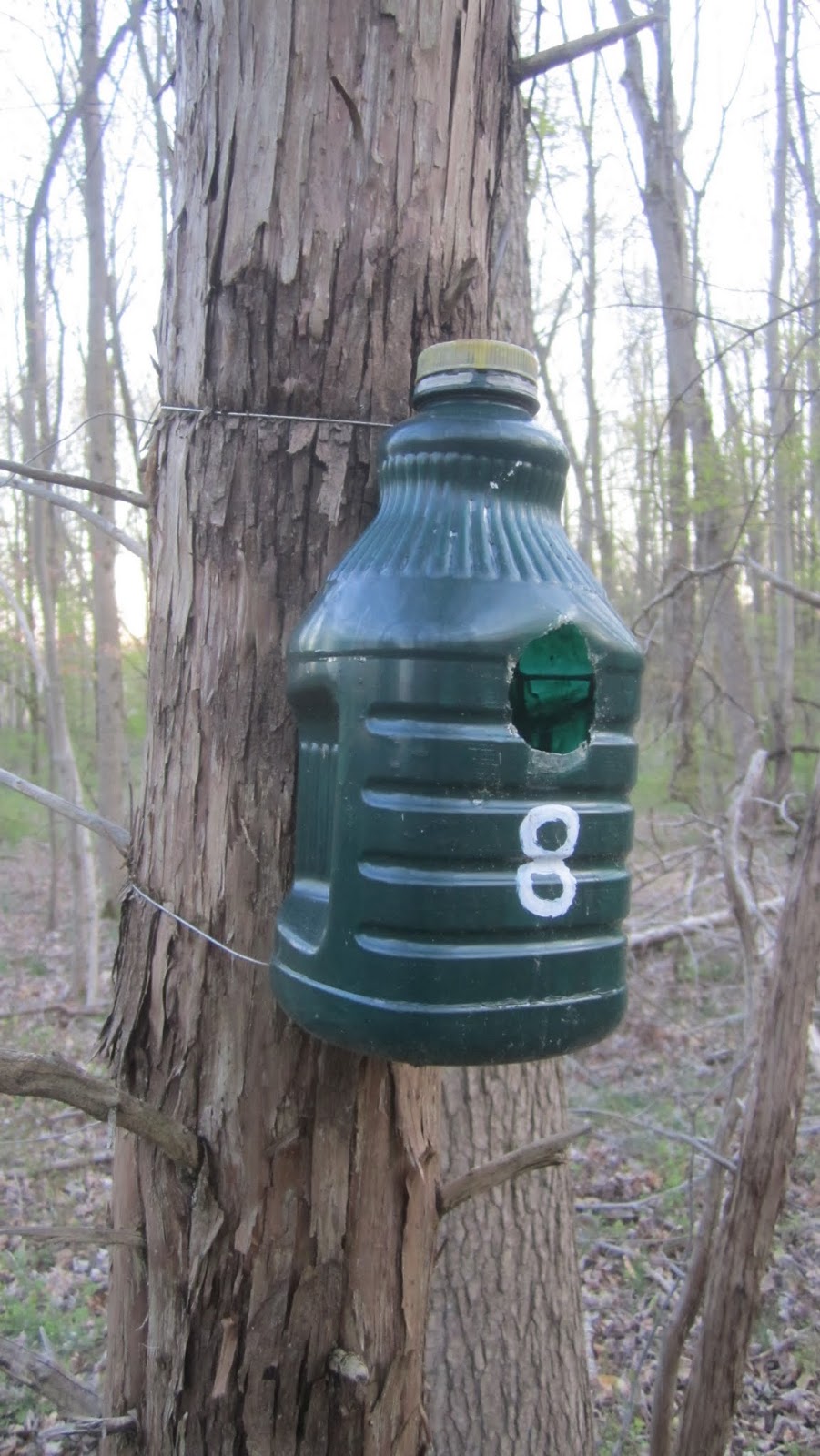 Not sure what's going on here. Affordable housing for the birds? There was no evidence of past use, and it looks like it would get hot in the summer if the sun reached it. The stringiness of the bark of the tree it's attached to says "Eastern red cedar"--more evidence of a less forested past. 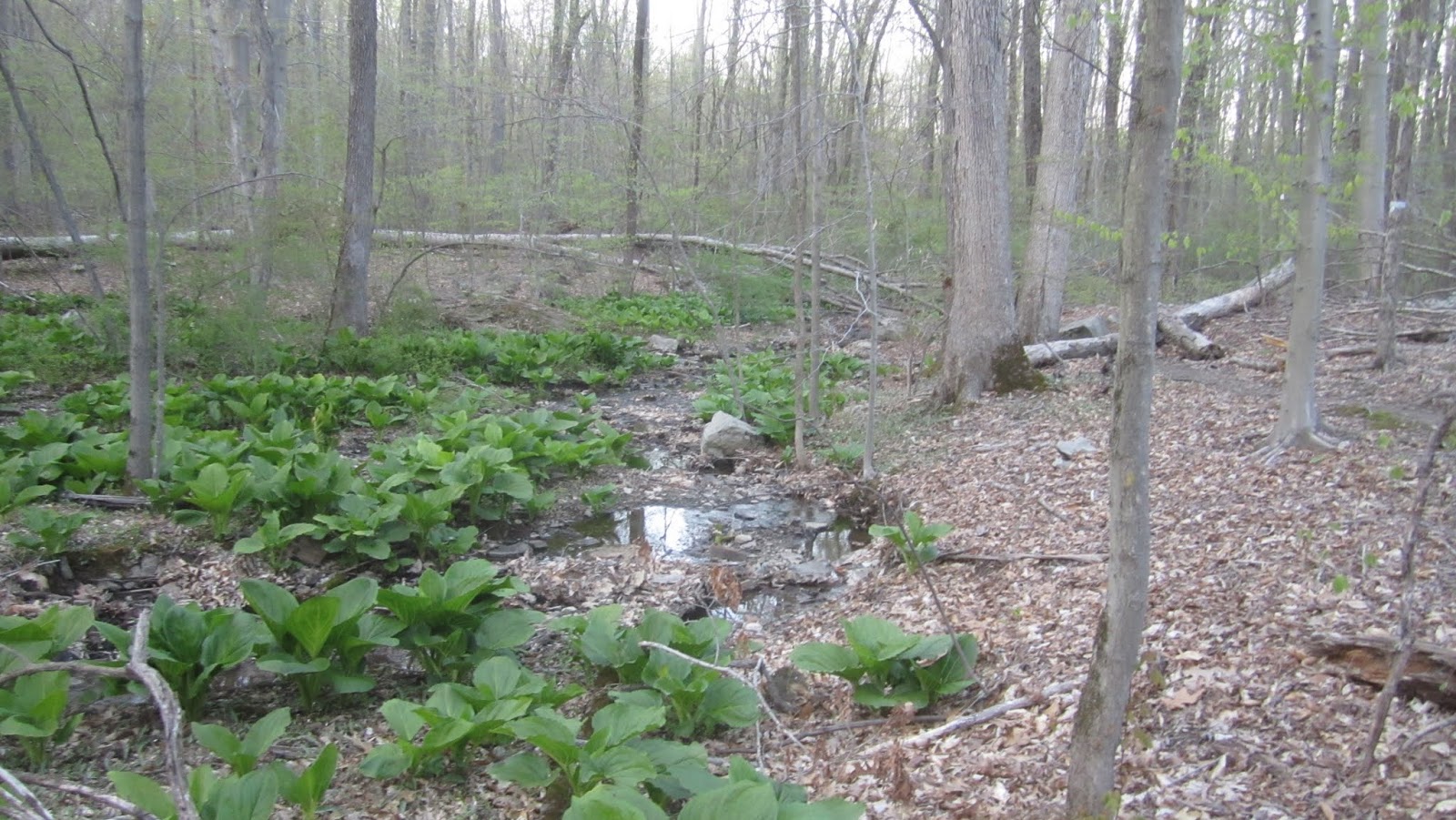 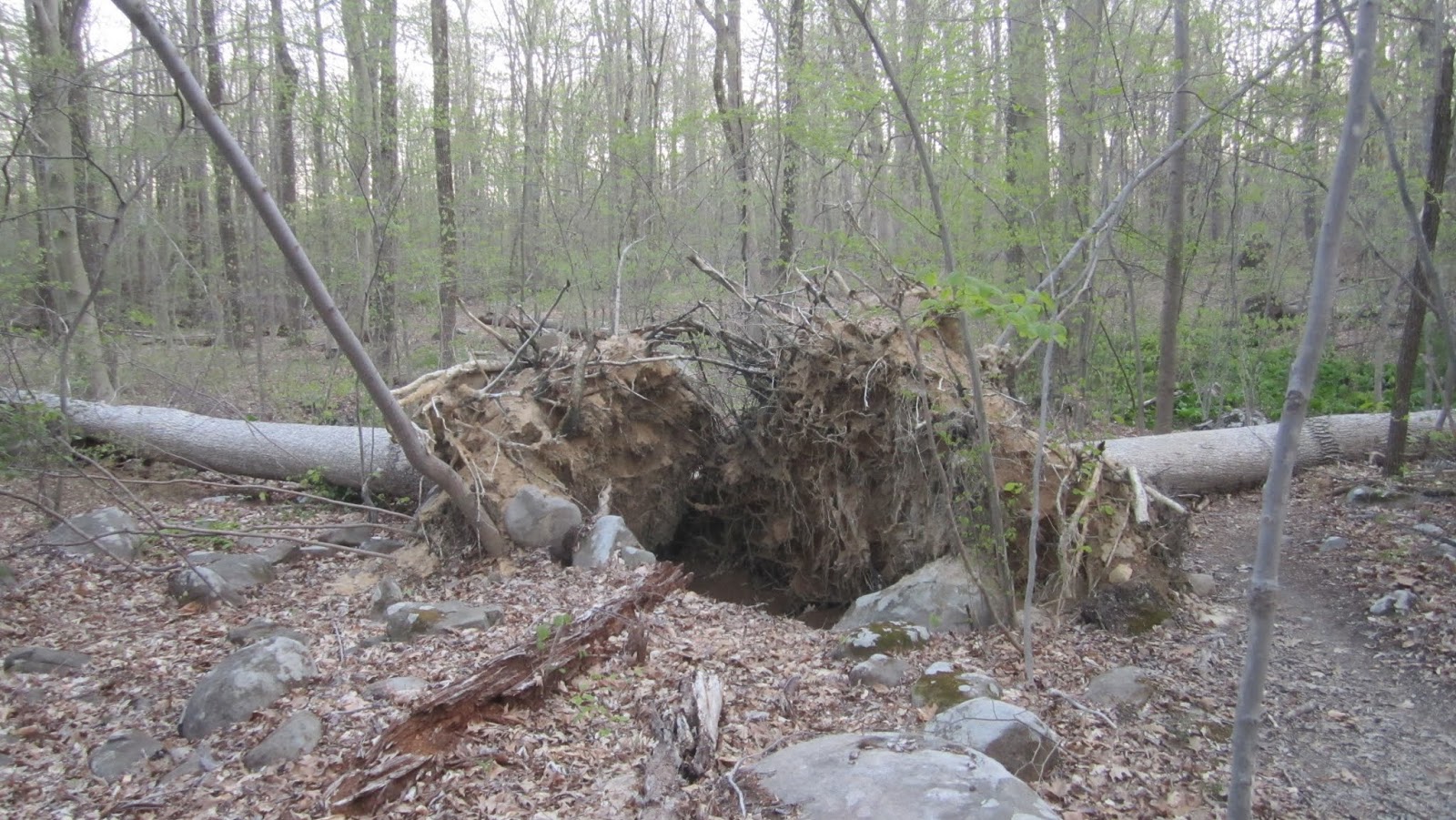 This is how twin white oaks fall--laying down an angle in a mathematician's forest. Just needs a couple more walls and a roof to make a cozy habitation, though there might be the problem of a wet basement. 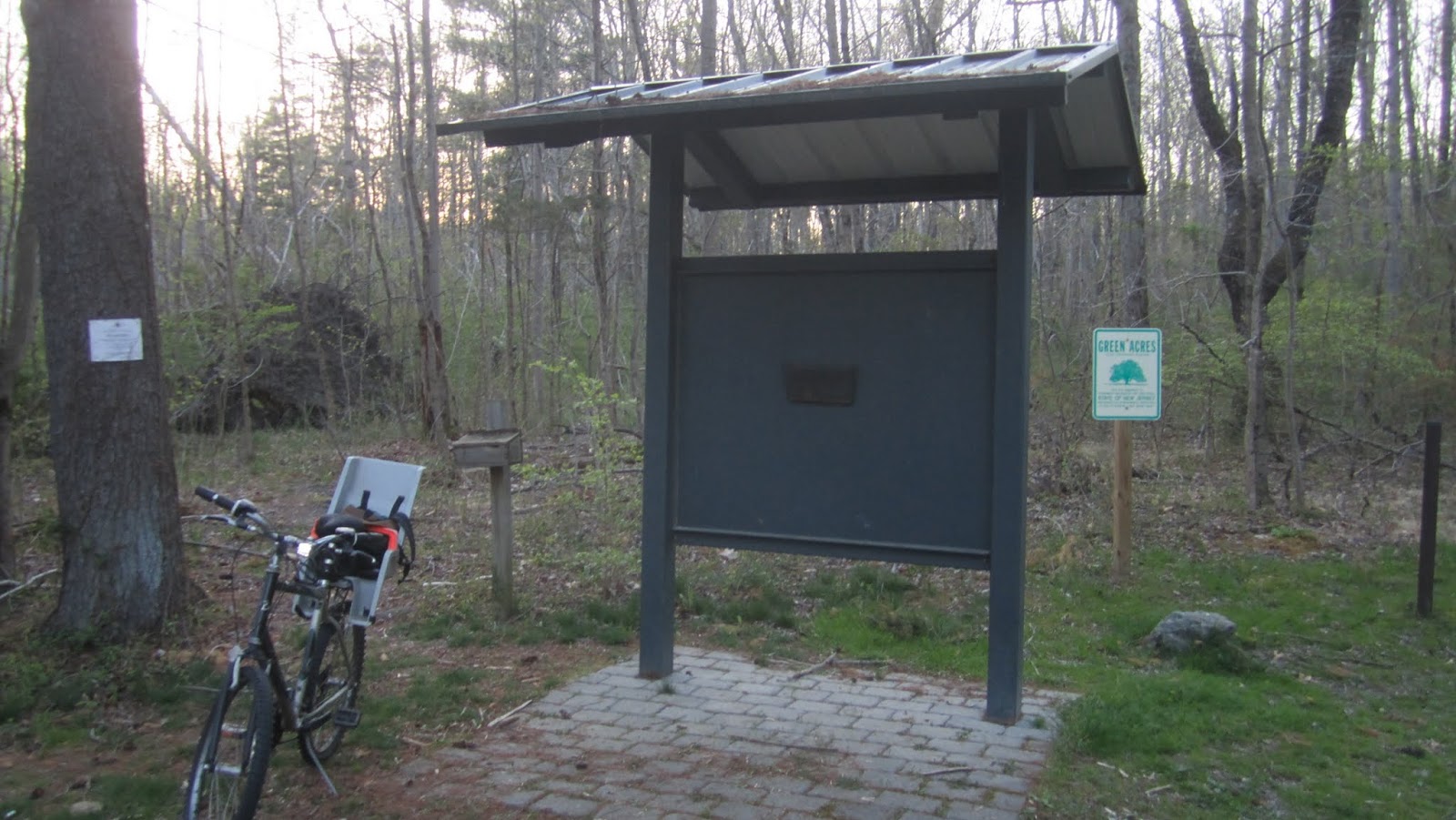 Back at the parking lot, the kiosk erected some years back by the county gives no indication of the pleasures of Herrontown Woods. Something about human nature makes it easier to build kiosks and those wooden boxes for brochures, than to keep them filled. 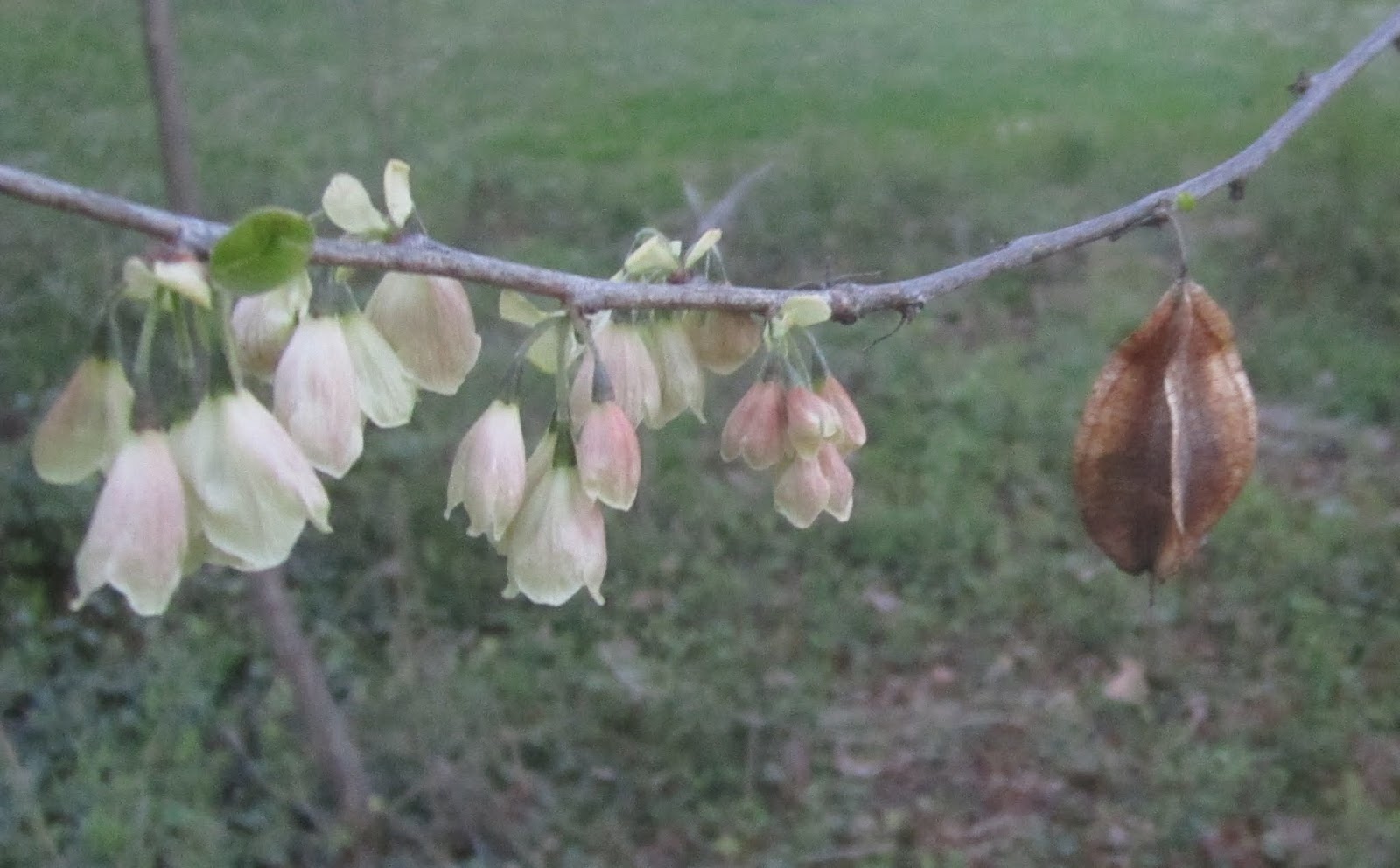 Heading back on Snowden Lane towards home, a silverbell (Halesia sp.) was blooming, with a snowbell (Styrax sp.) across the street. Both are in the Storax family, and neither have I seen growing anywhere else in Princeton.
(Note, 4.28: Of course, as soon as I say such a thing, I notice a Halesia in full bloom on South Harrison Street, on the left before reaching Route 1. Hard to glance sideways while navigating a narrow 2-lane road.) 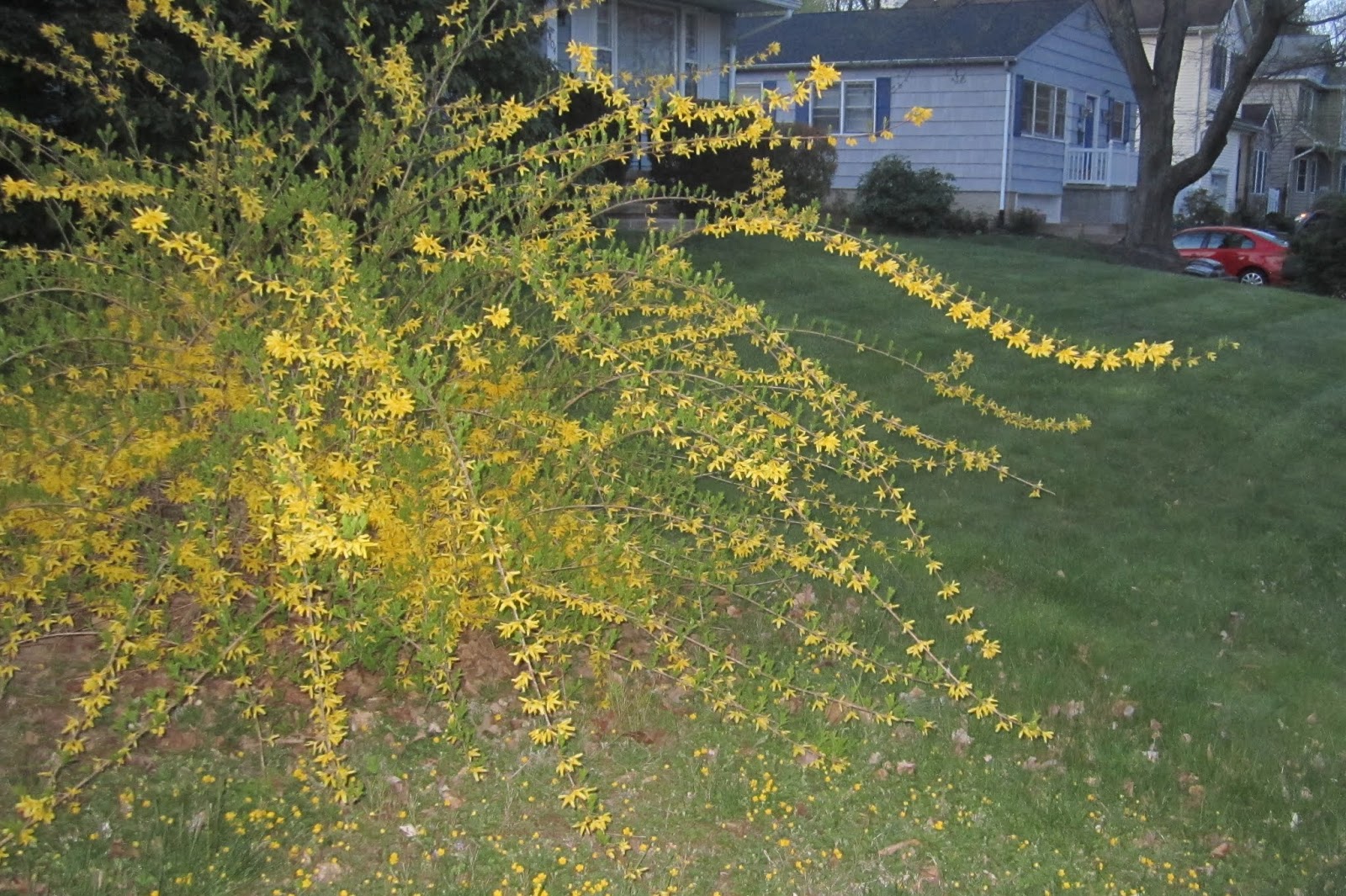 As the day's light waned on Franklin Ave., far from the rocks and echoes and wildflowers of Herrontown Woods, my vote for "Princeton's most graceful Forsythia" grows.
Posted by Stephen Hiltner at Sunday, April 28, 2013