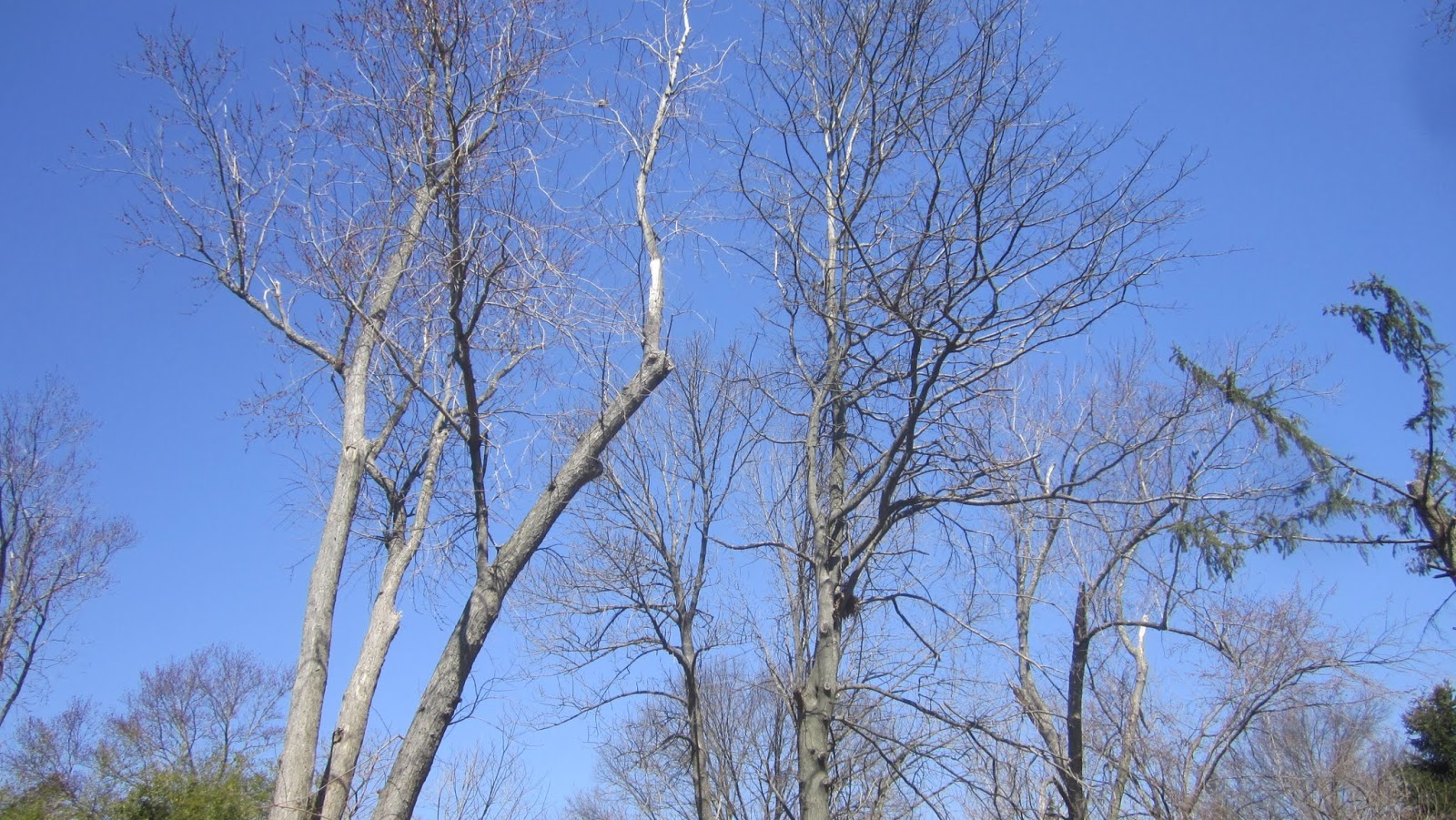 Introduce poultry into your backyard, and you may find yourself starting to scan the treeline with something beyond mild curiosity. Chickens and ducks are just about the most edible pets you could ever own, as the local wildlife are well aware. Predators can come by land or by air, by night or by day. 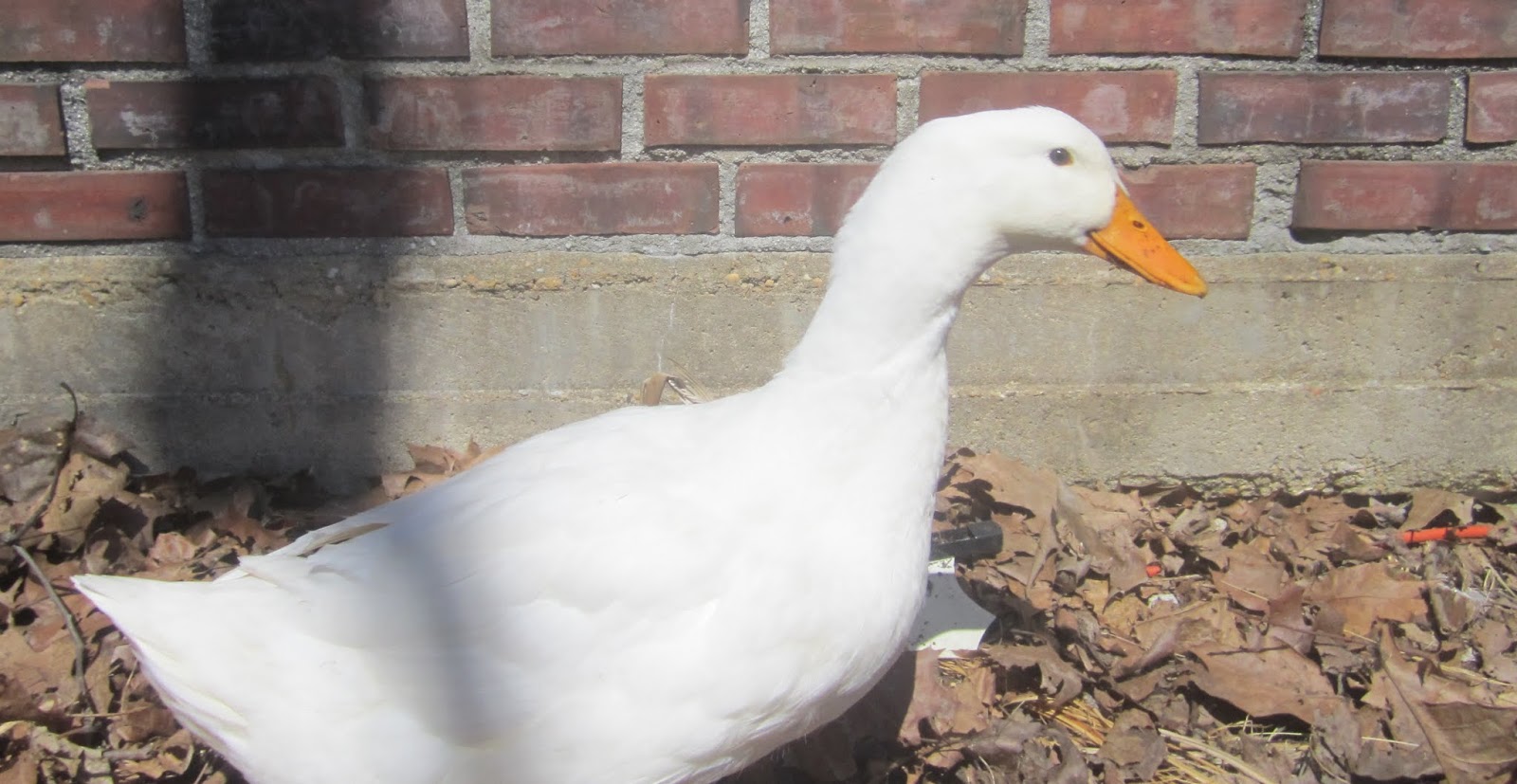 Vigilance is key, as this Pekin duck well knows. Any time I see it tilt its head sideways, the better to train a keen eye on the sky above, I will follow its glance upward to find a hawk, vulture or plane passing over.

When our 12 year old finally talked us into getting chickens, and then ducks, I wondered how all the undomesticated nature we'd been cultivating in the backyard would react. Would the poultry intimidate the mourning doves that had hung out next to the minipond at various hours? Would the chickens chow down on beneficial insects as well as the ticks?

Though having these birds in the backyard may be reducing visits by wild birds, their presence has heightened our awareness of wildlife in other ways. Recently, noticing the Pekin duck training an eye skyward, we looked up to see the tiny speck of a hawk hovering high above. Suddenly, the hawk folded its wings and began a slanted, accelerating straight-line dive. As with lightening, we were relieved to see we weren't the targets. It disappeared into the trees several blocks over. None of this we would have seen if not for the duck's signal.

By Night
A year ago, we started with four chickens, and now have two. The first was lost during the one and only night we forgot to close them in the coop. It was very traumatic for my daughter, who had named all four and been giving them loving care. But she worked through the trauma and the sense of responsibility, and the next day was able to channel it into making a beautiful grave with the shape of a chicken fashioned out of bits of rock.

Raccoon or Fisher?
We thought a raccoon had likely done the deed, in part because I found the head of the chicken far from the body. But in ten years I've only seen one wayward raccoon in our yard, and my neighbor reported she had seen something that night that she thought moved more like a fisher than a raccoon. I associate fishers with large tracts of north woods, but an internet search yielded news of their return to New Jersey. They are large members of the weasel family and one of the few predators smart and agile enough to take on porcupines. Princeton's animal control officer, however, offered no encouragement to this speculation that fishers might be afoot in the area.

By Day
Having lost a chicken in the night, we thought they'd still be safe if allowed to run free in the yard by day. This illusion was shattered late in the fall, when lack of foliage had made the yard more exposed, by a Coopers hawk in a mid-afternoon attack. That, too, was traumatic, all the more so because it seemed to sentence the remaining chickens to perpetual confinement in the coop and a small fenced-in run. It didn't help to find a big red-tailed hawk perched fifteen feet above the coop one morning, patiently awaiting breakfast. Word had clearly gotten out.

Since then, however, we've slowly relaxed our vigilance and shifted back to letting them out during the day. A friend with chickens in Kingston said he decided that the happiness of his chickens exploring the yard is worth the risk of an attack, and he's never lost a chicken that way. We've gravitated towards that philosophy, despite an unnerving visit one day from a coopers hawk that brazenly perched on our fence, just forty feet from where we stood, to check out the scene. It flew away before I could take a photo, and hasn't come back. 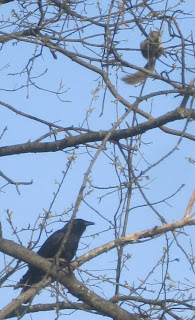 A couple fish crows also took an interest for a day or two, lingering in the trees above, conversing, trying to make sense of our backyard poultry scene, seeming to look for an angle that would benefit them. Fish crows are the sort of crow that says "uh-uh" all summer, as if telling you that whatever idea you just had is a bunch of hooey. 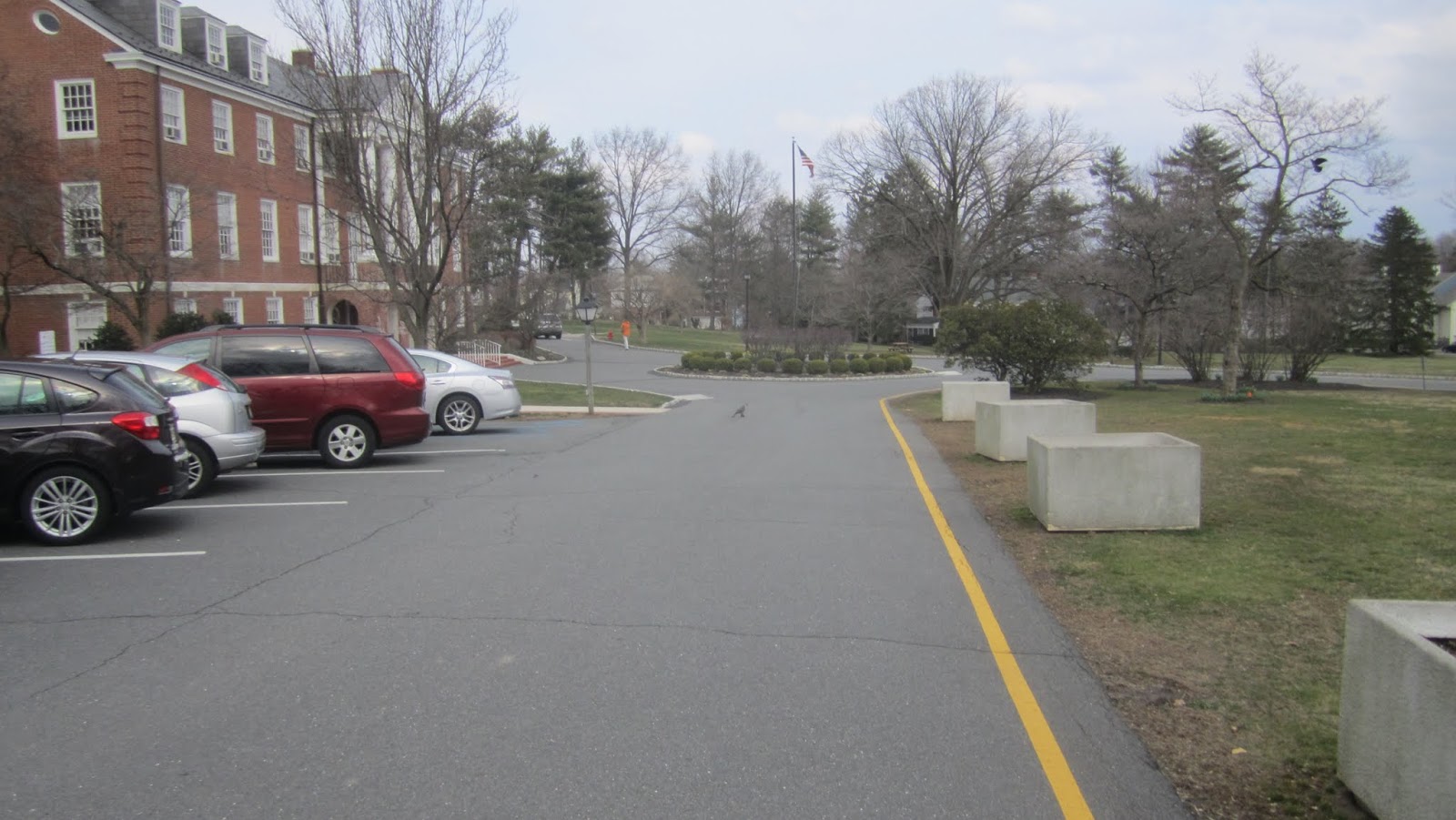 A week later, still wishing for a photo of a Coopers Hawk, I saw one land on the Westminster Choir College driveway. 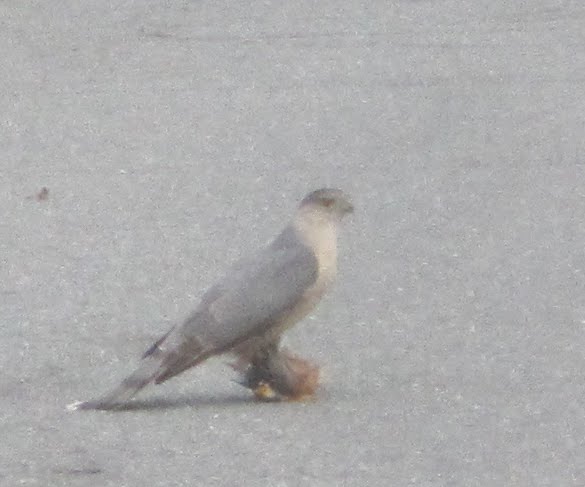 It was carrying a small bird, and posed long enough on the pavement for a bit of point-and-shoot documentation, 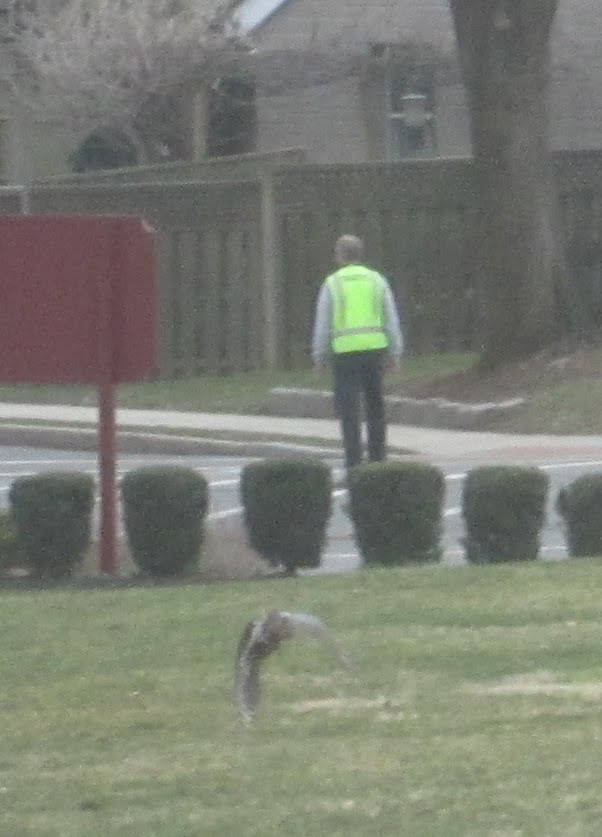 before flying off in the direction of the crossing guard.

By chance this photo caught the shift in perspective that comes from having chickens, from the urban environmentalist's cultivation and observation of a benign nature to more of a rural farmer's awareness of nature as both magnificent and threatening.